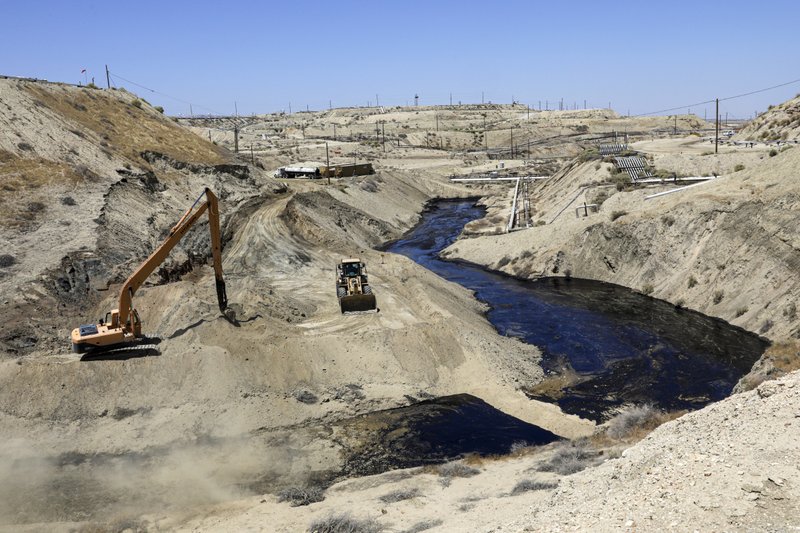 In this July 24, 2019, file photo, a crew works on seepage of 800,000 gallons of oil and brine water oil from an abandoned well in Chevron Corp's Cymric Oil Field in McKittrick, Calif. Gov. Gavin Newsom's administration has temporarily banned new oil wells in California if they use an extraction method that is linked to an ongoing oil spill in Kern County. (Irfan Khan/Los Angeles Times via AP, Pool, File)

SACRAMENTO, Calif. -- California Gov. Gavin Newsom cracked down on oil producers Tuesday, halting approval of hundreds of fracking permits until independent scientists can review them and temporarily banning new wells using another drilling method that regulators believe is linked to one of the largest spills in state history.

The state Oil, Gas and Geothermal Resources Division announced that it will not approve new wells that use high-pressure steam to extract oil from under the ground. It's the type of process Chevron uses at a field in the Central Valley that leaked more than 1.3 million gallons of oil and water this summer.

That process is different from fracking, which uses water and other chemicals at high pressure to extract oil. California has 263 pending fracking permits but has not approved any of them since July. That's when Newsom fired California's top oil and gas regulator after learning that the state had increased fracking permits by 35% since he took office in January, angering environmental groups.

Newsom, a Democrat, called the crackdown necessary to strengthen the state's oversight of oil and gas extraction "as we phase out our dependence on fossil fuels and focus on clean energy sources."

California has been a leader on environmental issues, with Newsom's Democratic predecessor, Jerry Brown, making climate change his signature effort.

"Every barrel delayed or not produced in this state will only increase imports from more costly foreign sources that do not share our environmental safety standards," said the group's president, Catherine Reheis-Boyd.