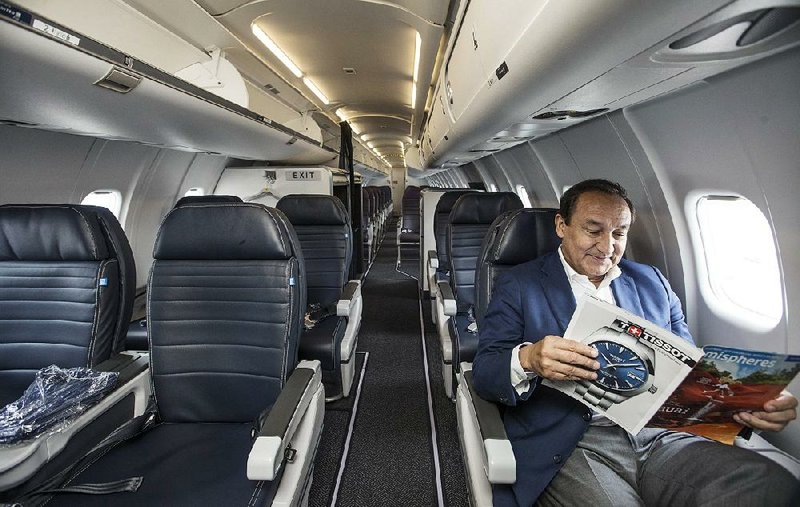 He said he shared the flight from Chicago with executives from Walmart, vendors who sell to the retailer, and folks from Tyson Foods and J.B. Hunt Transport Services. The aircraft is designed for business travelers and has reduced the number of seats the craft normally would have by 20 to provide more amenities and additional room for passengers.

"It's a pleasant plane to fly in," Munoz said in an interview at the airport coffee shop Wednesday morning.

The CRJ-550 from Bombardier is the only 50-seat aircraft with "true first-class seating" and offers more leg room in its first and economy plus classes than any other plane in the United fleet, according to the airline. The plane has four cabinets and large overhead bins to store carry-on bags, making it the only regional jet in which travelers won't typically have to check their rolling luggage.

The plane has 10 first-class seats, 20 economy plus seats and 20 economy seats. It has a self-serve refreshment center with snacks and drinks for travelers, as well as in-flight Wi-Fi.

The United Airlines chief executive officer was in town as part of a debut for the aircraft, which connects Chicago to 14 other cities.

United posted strong third-quarter results last month, with net income of $1 billion, or $3.99 a share, beating analysts' estimates. Revenue stood at $11.38 billion, up a bit more than 3% from the same period a year ago but slightly lower than analysts has predicted. The airline also adjusted its full-year projections for earnings per share upward to between $11.25 and $12.25.

During a conference call to discuss the company results, Munoz told analysts that United Airlines' showing was the result of investments in the customer experience. He said the CRJ-550 aircraft were part of that initiative.

At Northwest Arkansas Regional Airport on Wednesday, Munoz said that over the years, airlines have been competing primarily on price, and as a result passengers end up cramped and unhappy. Because of the focus on reducing ticket cost by cramming in customers and charging for amenities that once were standard, flying has become an unnecessarily stressful experience for many passengers, Munoz said.

He said United Airlines is shifting its focus to the customer and working to improve the the customer experience.

He said the CRJ-550 planes are aimed at improving the flying experience not just for business travelers but for leisure flyers as well, including adding more storage space for carry-on luggage, including roller-bags.

"Even if you're the last person boarding, we'll have room for you," Munoz said.