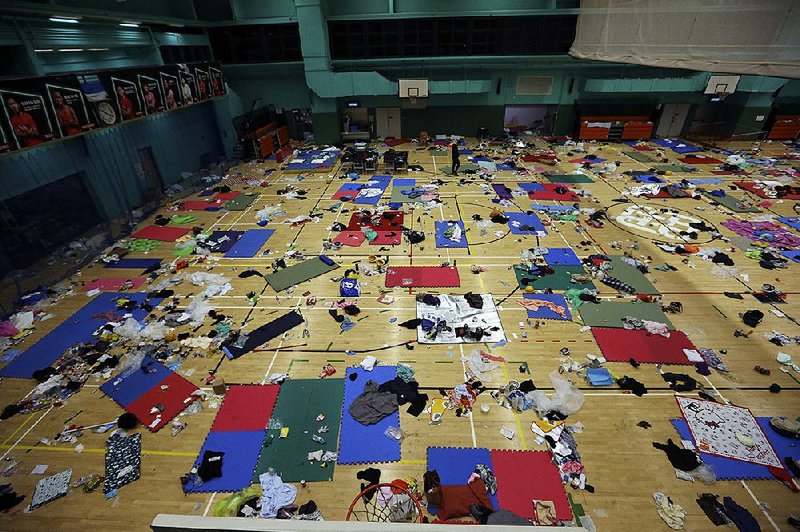 Protesters’ belongings litter the floor Wednesday on the campus of the Polytechnic University in Hong Kong. More photos are available at arkansasonline.com/1121hongkong/

HONG KONG -- Hong Kong schools reopened Wednesday after a six-day shutdown, but students and commuters faced transit disruptions as the last anti-government protesters remained holed up on a university campus, surrounded by police.

City officials tried to restore a sense of normalcy as primary and secondary classes resumed. Workers began cleaning up debris blocking a major road tunnel, but it was unclear when it would reopen. Officials warned protesters not to disrupt elections scheduled for the weekend.

A small group of protesters refused to leave Hong Kong Polytechnic University, the remnants of hundreds who took over the campus for several days. They won't leave because they would face arrest, and police have set up a cordon around the area to prevent anyone from escaping.

The occupation of Polytechnic capped more than a week of intense protests, the latest flareup in the often-violent unrest that has gripped the semi-autonomous Chinese city for more than five months.

[Video not showing up above? Click here to watch » https://www.youtube.com/watch?v=Iv70HxV1-kg]

Also Wednesday, a former British Consulate employee said he was detained in mainland China and tortured by secret police trying to extract information about activists involved in the movement -- revelations sure to add to protesters' fears about Beijing's tightening grip.

Since a police siege of the Polytechnic campus began Sunday, police have arrested 700 people who left campus to surrender, while another 300 minors were allowed to go home but may still face prosecution, Chief Superintendent Ricky Ho told reporters.

It was unclear how many protesters remained on campus, but they appeared to number fewer than 100. About two dozen scrounged through supplies in the cafeteria looking for food in the morning. Trash littered public areas, and a stench permeated the campus.

One protester, who spoke on condition of anonymity because he fears arrest, remained adamant.

Gallery: Aftermath of campus violence between protesters and police in Hong Kong

[GALLERY: Aftermath of campus violence between protesters and police in Hong Kong » arkansasonline.com/1121hongkong/]

"I think if you go out and surrender, it just shows you agree with what the police and that government are doing or have given up the fight," he said.

There were scattered incidents of protesters stopping trains by opening emergency doors and blocking traffic, but on a much smaller scale than last week.

Office workers joined protesters at lunch time in the central business district to show support for the movement, as they have every day since last week. Police kept the crowds on the sidewalks so they wouldn't block traffic.

Hong Kong's protests began in June over an extradition bill that would have allowed suspects to be sent to China to face trial. Opponents saw it as a threat to the "one country, two systems" framework that gives Hong Kong its relative autonomy.

The bill has been withdrawn, but protesters now demand fully democratic elections and an independent investigation into police actions in suppressing the protests. City leaders have rejected these demands and said violence must stop before meaningful dialogue can begin.

Simon Cheng, the former British Consulate employee, said in an online statement and media interviews that he was hooded, beaten, deprived of sleep and chained to an X-shaped frame by plainclothes and uniformed agents as they sought information on activists involved in the protests and the role they believed Britain played in the demonstrations.

Chinese police in August announced Cheng's release after 15 days of administrative detention but gave no details of the reasons behind his detention.

China's foreign ministry responded to the allegations and the summoning of the ambassador at a daily briefing on Wednesday.

Ambassador Liu Xiaoming will "by no means accept the so-called concerns or complaints raised by the British side," ministry spokesman Geng Shuang said.

"The Chinese ambassador to the U.K. will lodge the complaints with the U.K. to express our strong opposition and indignation to the U.K.'s wrong words and deeds on Hong Kong in these days," Geng said.

The Hong Kong government joined China in condemning passage of legislation by the U.S. Senate that mandates sanctions on Chinese and Hong Kong officials who commit human rights abuses and requires an annual review of the favorable trade status that the U.S. grants Hong Kong.

Geng said in a statement that the aim of the bill was to "bolster anti-China, extremist and violent radicals who attempt to disrupt Hong Kong (and) damage Hong Kong's prosperity and stability" as part of a plot to contain China's development.

Information for this article was contributed by Alice Fung, Kelvin Chan, Yanan Wang and Danica Kirka of The Associated Press.