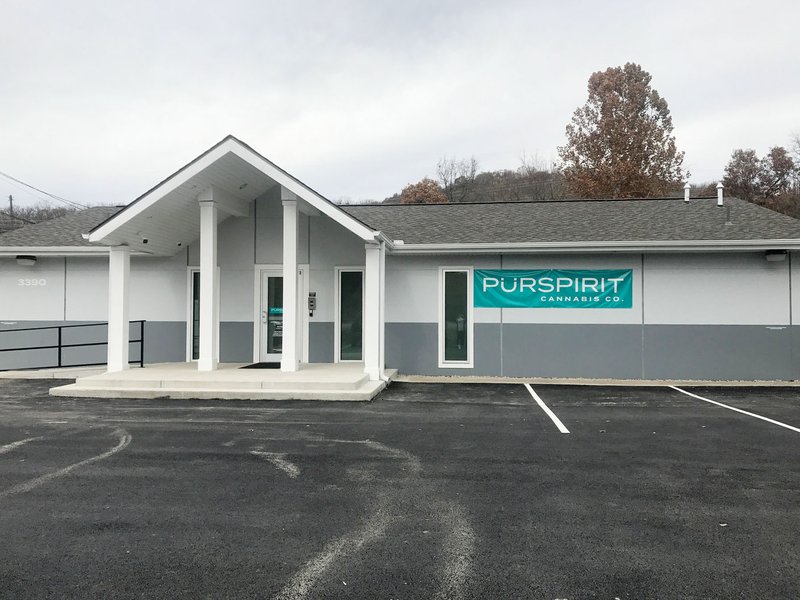 No other dispensaries are planned for Northwest Arkansas, said Scott Hardin, spokesman for the Arkansas Department of Finance and Administration. The state is authorized to have 32 dispensaries. The state is divided geographically into eight zones, and the intent is for four dispensaries to be in each zone. Zone 1 includes Benton, Washington, Madison and Carroll counties, which means Purspirit is the fourth and last dispensary the region can expect to see. Zone 1 is the first zone to have all of its dispensaries in operation, Hardin said.

Purspirit has about 20 employees, and Erickson said the dispensary’s purpose is to provide medication for patients who need it.

“We’re not drug dealers. We’re professionals in a new industry,” he said.

Jessica Jordan, 31, of Fayetteville was one of Purspirit’s first customers Wednesday. Jordan said she has chronic pain and post traumatic stress disorder, for which she’s been prescribed a “never-ending list” of depression and anxiety medications.

“I couldn’t remember what grade my daughter was in,” she said.

Jordan no longer takes those medications now that she can purchase medical marijuana, she said.

Arkansas voters approved the legalization of medical marijuana in 2016, but legal and regulatory hurdles slowed the program’s rollout. The first dispensary, Doctor’s Orders, opened May 10 in Hot Springs.

Dispensaries in Arkansas sold about 2,900 pounds of marijuana, more than $20 million worth, as of Monday, Hardin said.

A patient or caregiver ID card is necessary to buy medical marijuana products.

About 28,600 people in Arkansas had the cards as of Friday, according to the Arkansas Department of Health.

• Be an Arkansas resident with proof of residency State law prohibits members of the Arkansas National Guard and U.S. military from obtaining a registry ID card.