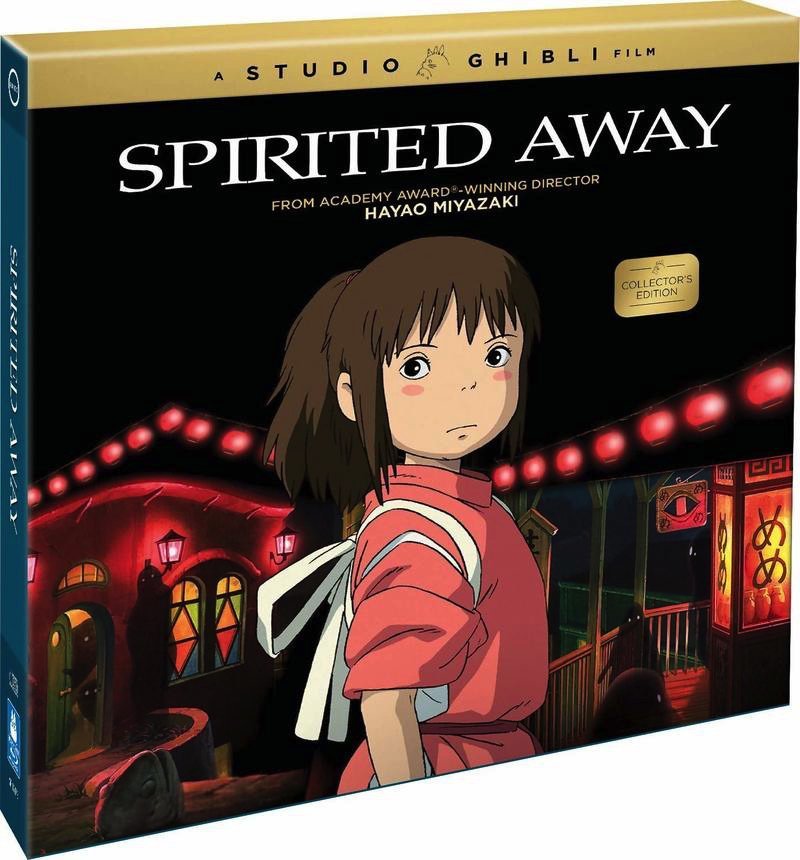 One of the 21st century's best films, Spirited Away, is filled with haunting imagery, subtly rendered characters and an emotional core absent from most anime. It is a rich cinematic experience, a story that reads like a direct translation of the director's dream. At times it feels like we've fallen into director Hayao Miyazaki's head, immersed in a world with a consistent, if alien, logic where weightless and timeless things coexist with buckets and mops.

It's a kind of Alice in Wonderland story about a sulky little girl named Chihiro (her English voice supplied by Daveigh Chase from Lilo & Stitch) who, with her parents, stumbles across what looks like an abandoned theme park. But soon her parents fall under a spell -- brought on, perhaps, by their lack of character -- and when night falls the park is overrun by denizens of the spirit world. With the help of mysterious Haku (Jason Marsden), Chihiro takes refuge as a worker in a bathhouse where the spirits come to relax.

Chihiro's witch boss Yubaba (Suzanne Pleshette) is a difficult taskmaster, but the child overcomes her timidity and struggles to escape this alternate universe back to her "reality."

It would be glib to describe Spirited Away as a kind of acid trip of a movie, although no doubt some will find their viewing experience enhanced by self-medication. But you needn't have fond memories of Pink Floyd laser shows to marvel at the hallucinatory magic of Miyazaki's bizarre old world. Spirited Away may not be the film that causes anime to blow up, but it is a movie of rare depth and texture, full of strange and wonderful creatures with appetites and neuroses and the sort of fantastic intensity that evokes nightmares.

Miyazaki has said he made this movie for children, to reassure them about the future. But Spirited Away is not a children's film -- the American film it most closely resembles is Richard Linklater's Waking Life. Both movies are about pushing through the assumptive limits of human experience, about vacating the physical world for the phantom realm. Miyazaki's dream is different from Linklater's but no less potent or mature.

This special Collector's Edition of Miyazaki's 2001 masterpiece includes a 40-page art and essay book, as well as the soundtrack.

Dora and the Lost City of Gold (PG, 1 hour, 42 minutes) A spirited and entertaining live-action journey for younger audiences, Dora follows a fearless and energetic girl who grows up exploring the surrounding jungle with her parents then embarks on the entirely different adventure of attending high school. With Isabela Moner, Eugenio Derbez, Michael Peña, Eva Longoria, Danny Trejo; directed by James Bobin.

Blinded by the Light (PG-13, 1 hour, 58 minutes) This predictable, affectionate comedic drama set in 1987 during the austere days of Margaret Thatcher's Britain concerns a teenager who discovers the working-class music of Bruce Springsteen, which has a profound effect on his approach to life. With Viveik Kalra, Dean-Charles Chapman, Rob Brydon, Hayley Atwell; directed by Gurinder Chadha.

A Faithful Man (not rated, 1 hour, 15 minutes) A fun, fizzy, detailed and definitely French romantic farce in which a couple's relationship becomes complicated -- and no wonder! -- when Marianne leaves Abel for his best friend Paul (and the father of her unborn child) and returns after Paul dies. With Louis Garrel, Laetitia Casta, Joseph Engel; directed and co-written by Louis Garrel. Subtitled.

American Dreamer (R, 1 hour, 32 minutes) Intense, violent and nightmarish drama in which a down-on-his-luck ride-share driver who makes extra cash chauffeuring a low-level drug dealer around town descends into financial hell, which provokes him into the unwise decision to kidnap the dealer's child. With Jim Gaffigan, Robbie Jones, Isabel Arraiza; written and directed by Derrick Borte.

The Fare (not rated, 1 hour, 22 minutes) Time-warp mysteries are all the rage, and here's yet another that's cleverly written, intelligently designed and an unusual approach to romance. Taxi driver Harris, instructed to pick up a passenger in the middle of nowhere and drop them at a distant yet similarly remote location, encounters a thunderstorm that results in his passenger's disappearance from the back seat. With Gino Anthony Pesi, Brinna Kelly, Jason Stuart; directed by D. C. Hamilton.

After the Wedding, (PG-13, 1 hour, 52 minutes) If someone is going to remake a foreign film like 2007's After the Wedding for American audiences, you could do worse than have Julianne Moore attached to the project. She made the hiring of the original director a condition of her participation in Gloria Bell, a remake of Chilean director Sebastián Lelio's 2013 film Gloria.

There's nothing to criticize about how director Bart Freundlich leads us through this story of how a manager of an orphanage in Kolkata travels to New York to meet a benefactor. It's handsomely photographed and tastefully shot. It's only that the story feels manipulative as the emotional stakes keep being raised.

Michelle Williams and Moore approach their respective characters from opposite corners; Williams' Isabel being quiet and wounded, while Moore's Theresa is large and aggressive. And Billy Crudup plays Theresa's artist husband, Oscar, with the same kind of patient rationality he displays in Where'd You Go, Bernadette.

Still, After the Wedding is a soap opera performed by over qualified actors. If you have a weakness for gasp-inducing melodrama, you'll like it. Otherwise, you might appreciate the work of the performers. It seems unlikely that either Williams or Moore will win any award nominations for this film, but that's not because of the quality of their work.

Good Boys (R, 1 hour, 30 minutes) This realistic and entertaining reflection of pre-teen life describes how three sixth-grade boys borrow a parent's drone to record a young couple kissing -- a situation they hope to be in at a forthcoming party -- then crash the drone and take desperate measures to replace it before the parent finds out. With Jacob Tremblay, Keith L. Williams, Brady Noon; directed by Gene Stupnitsky.

The Peanut Butter Falcon (PG-13, 1 hour, 37 minutes) Warm-hearted and sincere, if none too memorable or realistic, this follows the adventures of young Zak (Zack Gottsagen), who has Down syndrome, as he slips away from a residential nursing facility to pursue his dream of becoming a professional wrestler. With Jon Bernthal, Shia LaBeouf, Dakota Johnson, Bruce Dern, Thomas Haden Church, John Hawkes; written and directed by Tyler Nilson and Michael Schwartz.

Bliss (not rated, 1 hour, 20 minutes) A harsh, noisy and often unsettling horror saga in which a painter of dark subjects who has a creative block struggles to complete a signature work with the help of drugs, sex and a little murder in Los Angeles. With Dora Madison, Tru Collins; written and directed by Joe Begos.

The Farewell (PG, 1 hour, 40 minutes) Complicated, emotional, and sometimes absurd -- as only an intimate family drama can be --The Farewell revolves around a Chinese family that discovers their grandmother has only a short time to live and decides not to tell her, instead scheduling a wedding to gather everyone before she dies. With Awkwafina, Zhao Shuzhen, Tzi Ma; written and directed by Lulu Wang.

The Mountain (not rated, 1 hour, 46 minutes) Grim and cold-natured, loaded with questions that are never answered, this is the story of a young man coming of age in the 1950s who, after losing his mother, goes to work at an asylum with a doctor specializing in lobotomies. With Tye Sheridan, Jeff Goldblum, Udo Kier; written and directed by Rick Alverson.