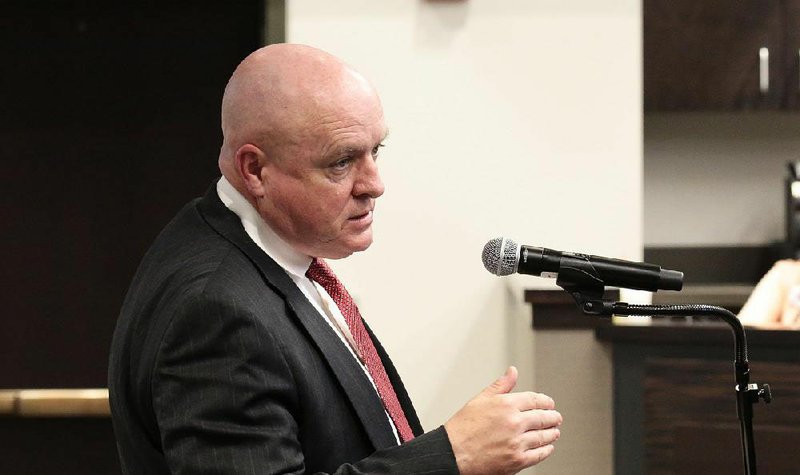 Little Rock School District Superintendent Mike Poore on Thursday proposed taking "a step back" on district plans to close and consolidate some of its schools for the 2020-21 school year, in part to soothe the raw emotions of the community.

Poore made the proposal at a Community Advisory Board meeting in which the proposed terms of a memorandum of understanding with the state over the district's return to a locally elected school board was briefly discussed.

The superintendent told the advisory board that the district must proceed this coming school year with closing McClellan and J.A. Fair high schools and altering attendance zones for other high schools in the city to accommodate the opening of the new Southwest High School in August.

Poore and his staff have proposed three options for altering the high school attendance zones, two of which will make Hall High School a magnet school with a focus on science, technology, engineering, arts and mathematics or STEAM subjects and no attendance zone.

The superintendent proposed that community meetings be held Dec. 2 and 4 at Parkview Magnet High School to provide information and collect feedback from community members about the high school plans and the newly proposed delay on the elementary and middle school changes.

The advisory board voted to hold a special meeting Dec. 5 to further consider what it might recommend to Arkansas Education Secretary Johnny Key, who has the authority to make a final decision on the matter. Key acts in place of a school board in the state-controlled, 23,000-student district.

The state-appointed advisory board recommended in January and Key approved in February a Community Blueprint Facility Plan that not only dealt with changes to the district's high schools but also called for closing three elementaries and a middle school as a way to help the district more efficiently serve its declining student enrollment.

The plan specifically called for closing Henderson Middle School along with Romine and David O. Dodd elementaries and assigning those pupils to the J.A. Fair building, which would be a kindergarten through eighth grade school. Additionally, Rockefeller Elementary on the city's east side would be closed as a traditional elementary and pupils assigned to Washington Elementary.

Since the approval early this year of the Blueprint plan, the district and state have been embroiled in conflicts over the return next year of the state-controlled district to the management of a locally elected school board -- with some limits -- and the state-directed end to the district's practice of collective bargaining with its employees.

Poore said Thursday night that "emotions are raw and everything is difficult" and "maybe it would be a good idea to pause" the reconfiguring of elementary and middle schools.

He noted said that district leaders had intended to take time during this school year to involve students, teachers and community members in aggressive planning for the kindergarten-through-eighth-grade academic program at Fair, but that work has not progressed in light of other issues. It could be done in the remaining part of the year but that classroom preparation for student testing in the spring would be a priority over the planning, he said.

Poore acknowledged that there will be consequences if the delay takes place. The reconfiguring of the schools was intended to save some $2 million that could be applied to employee salary increases. That money won't be immediately available, he said.

Any delay also would mean that a decision on the elementary and middle school buildings would be transferred to a school board that is newly elected in November 2020. The new board would have to make a decision on the campus uses right away.

Still another issue would be the need to make sure that Fair, which is one of the district's newer and best facilities "doesn't fall out of our hands" to an independently run charter school. He said that the district would alter its master facilities plan to include any delay but would continue to use Fair in the interim for athletics, the arts and employee training programs.

The five advisory board members present Thursday didn't object to the possible delay.

"I'm in support of slowing down but we must hear from others," member LaShannon Spencer said.

Jeff Wood, chairman of the advisory board, said that the board has been urged to defer matters to an elected board.

Melanie Fox, the board member who made the motion to approve the Blueprint plan in January, said she did so with the caveats of adequate funding and meeting the needs of the school district.

Audience members at Thursday's meeting generally welcomed the delay on the elementary and middle school changes. Several urged that current high school students be allowed to graduate from their current schools.

High school Option 1 would make Hall High School a magnet school with no attendance zone, enabling it to attract students districtwide with an academic focus on science, technology, engineering and mathematics, or STEM subjects, possibly in partnership with the city's medical facilities and using a career-academy organizational model.

Hall's existing attendance zone would be divided among Central, Southwest and the Pinnacle View School of Innovation, which now just has a ninth grade attached to Pinnacle View Middle School on Ranch Road.

Pupils attending the nearby Forest Heights STEM Academy for prekindergarten through eighth grade would be given priority for enrollment at Hall over other students in the district.

The current school attendance zones for McClellan High and J.A. Fair High would be combined, and those students in the merged zone would be assigned to the new Southwest High School at Richsmith Lane and Mabelvale Pike. Additionally, a section of the current Hall attendance zone -- south of Interstate 630, west of University Avenue and east of Shackleford Road -- would be attached to the Southwest High zone.

Option 1 also creates an attendance zone in northwest Little Rock for the so-called West High attached to Pinnacle View Middle School. That school will serve ninth- and 10th-graders in the 2020-21 school year. The new attendance zone would take in the northwest portions of the existing Hall and Central high attendance zones -- an area west of Interstate 430 and north of Hinson Road.

Option 2 is nearly identical to Option 1, with the only difference being that all students in the Pinnacle View Middle School attendance zone would have the option to attend the West High program -- based on seat availability -- instead of Central High.

The Pinnacle Middle School attendance zone is made up of the Terry, Don Roberts and McDermott elementary school zones. The area that could choose between Central and West High would be south of Hinson Road, west of I-430 and incorporating the Peachtree and Cherry Creek neighborhoods.

As in Option 1, Hall would not have an attendance zone but would be a magnet school open to students citywide.

Hall High not only would retain an attendance zone if Option 3 is selected, but the zone would be expanded on its west, southeast and northeast sides.

More specifically, the Hall zone would include a section of the current Central High zone that is north of I-630 and east of I-430 and south of Rodney Parham Road.

It would also expand into the very northwest part of the district west of River Mountain Road, including the Walton Heights neighborhood.