Rx-plan finder confusing to some 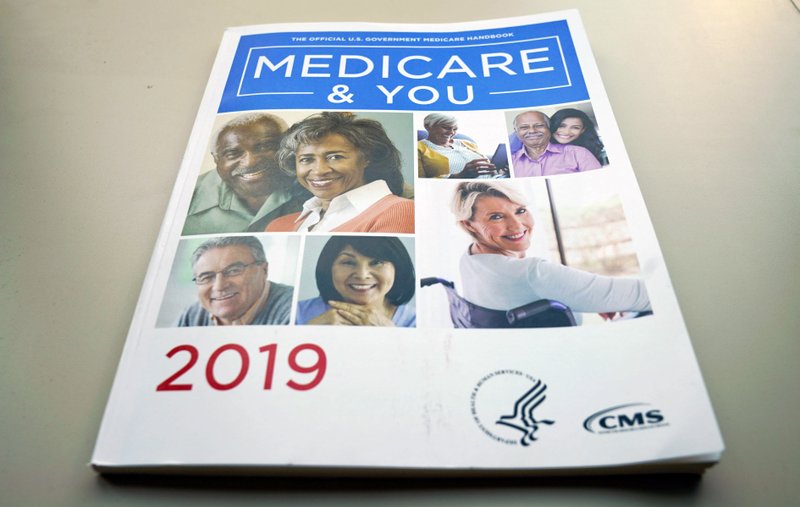 In this Nov. 8, 2018 file photo, the U.S. Medicare Handbook is photographed in Washington. Medicare's new prescription drug plan finder has a glitch that can steer unwitting seniors to coverage that costs much more than they need to pay. (AP Photo/Pablo Martinez Monsivais)

WASHINGTON -- Medicare's revamped prescription-plan finder can steer unwitting senior citizens to coverage that costs much more than they need to pay, according to people who help with sign-ups as well as program experts.

Serving some 60 million Medicare recipients, the plan finder is the most commonly used tool on Medicare.gov and just got its first major update in a decade. President Donald Trump's administration has hailed the new version and Medicare Administrator Seema Verma says it will empower beneficiaries to take advantage of their coverage options.

But as open enrollment goes into the homestretch Thanksgiving week, critics say the new tool can create confusion by obscuring out-of-pocket costs that people should factor into their decisions.

"I want to make sure people are given the most accurate information and they're making the best decision -- because they are the ones stuck with it," said Ann Kayrish, senior program manager for Medicare at the National Council on Aging, a nonpartisan organization that advocates for senior citizens and provides community services.

Government programs mixing health care and technology have faced struggles. Despite billions spent to subsidize electronic medical records, getting different systems to communicate remains a challenge. Former President Barack Obama's administration's debut of healthcare.gov resulted in a debacle when the website froze up the first day.

"It's obviously an effort that needs a lot more work to meet the legitimate expectations of seniors," Casey said. "Especially when you launch something new, [it] can go awry. People steered in the wrong direction should get a measure of fairness."

The Medicare plan finder's issue stems from a significant change the agency made for 2020.

The plan with the lowest premium now gets automatically placed on top, with the monthly premium displayed in large font.

But premiums are only one piece of information.

When out-of-pocket expenses such as copays are factored in, the plan with the lowest total annual cost is often not the first one shown by the plan finder.

It takes extra work for a Medicare enrollee to discover that.

"If they pick the plan based solely on the premium they are likely getting a plan that could cost them thousands more in a calendar year," said Christina Reeg of the Ohio Department of Insurance. She heads a program that helps Medicare enrollees find the right plan.

In a statement, Medicare said the monthly premium is a cost that consumers understand and will always be an important decision factor.

But the agency also said total cost paid out-of-pocket is at least equally, if not more important, particularly for people who take prescription drugs -- as do most senior citizens. Medicare said it's testing ways to encourage consumers to look at total costs, such as a pop-up.

The agency said it chose to prominently display premiums because user testing showed that's what consumers are familiar with. The total annual cost is included, but in a smaller font.

That's puzzling to Kayrish. The lowest premium "doesn't necessarily translate to lowest cost over the year," she explained.

Consumers using the plan finder first enter their medications and dosages. To get it to find plans by lowest total annual cost, they must take a few more steps, Kayrish said.

After the screen displays initial search results, consumers should look for the drop-down menu on the right of the screen. Next, she said, select the feature that lets you re-sort plans by "lowest drug + premium cost."

A reporter's sample search on a list of six medications for high blood pressure, high cholesterol and diabetes returned 29 plans in the Washington, D.C., area, topped by a lowest-premium option for $13.20 a month.

But after re-sorting for the lowest total cost, the best deal was a plan with a monthly premium of $25.80.

When out-of-pocket expenses were factored in, the second plan cost about $5,800 less a year than the initial lowest-premium option the plan finder displayed.

Costs can vary so much because plans have different coverage designs and they don't pay the same prices to drugmakers.

And Kayrish said there's another issue: The new plan finder can return options that don't cover all of a patient's medications.

If a low-premium plan has very high out-of-pocket costs, it's a clue that some drugs may not be covered.

People have until Dec. 7 to pick or switch "Part D" prescription drug plans or, if they're seeking comprehensive medical care through a private insurer, a Medicare Advantage plan. Coverage takes effect Jan. 1.