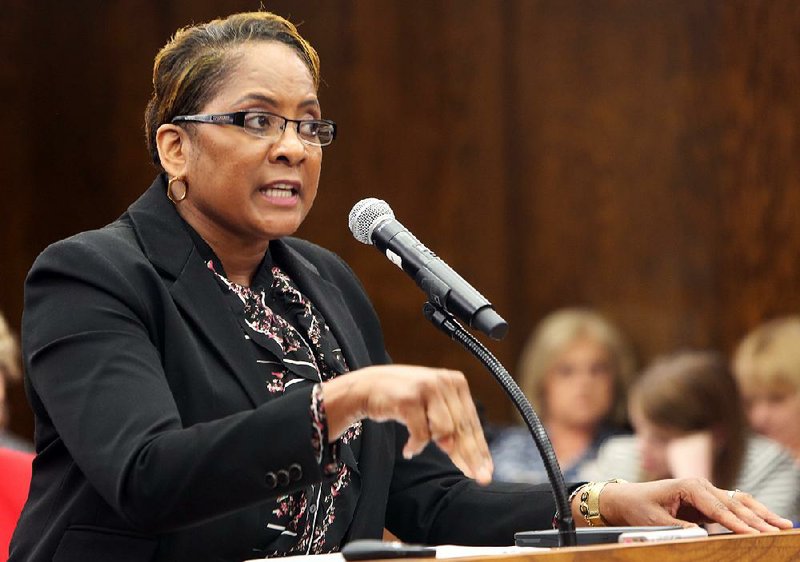 The former head of the defunct Covenant Keepers charter school has one week to return its missing financial records or answer to Pulaski County Circuit Judge Mary McGowan.

Valerie Tatum, the Little Rock school's superintendent for 10 years, testified that she does not have the records or knows where they are.

"You're the one where the buck stops," McGowan told Tatum after a 90-minute hearing. "It doesn't work to just say, 'I don't have it.'"

Failure to comply puts the 55-year-old Maumelle woman at risk of contempt of court, which can involve a fine, jail time or both.

Tatum also has a week to turn over an accounting of the nearly $200,000 she withdrew from Covenant Keeper's bank account in February, the judge said, citing the importance of accounting for taxpayer dollars.

The withdrawal, representing most of the school's money, prompted state charter regulators to immediately revoke Covenant Keepers' charter in February, ahead of its planned June closing. Authorities also reported the missing money to Little Rock police.

Tatum testified that she took the funds at the authorization of the Covenant Keepers school board to pay off the school's debts, including to its sponsor, City of Fire Community Development Inc., the 501(c)(3) nonprofit established by her husband, Tyron Tatum. Valerie Tatum resigned as superintendent in September 2018. She said the board authorized her to spend the money in October 2018.

Tatum was in court Thursday to answer to the state Board of Education about why she had not complied with a March board subpoena to turn over the missing financial records. Education authorities say they need the financial records to audit the school. The documents are also necessary to pay some still-outstanding bills.

The board took Tatum to court in June to get a court order to make her obey its March subpoena for the financial records and an inventory of furniture she removed from the school.

The board has been trying to get the documentation from Tatum since February when she went to the campus and removed furniture and filing cabinets, about three weeks after Covenant Keepers gave up its charter. Board attorney Mary Claire Hyatt said the filing cabinets contained the missing financial records.

Tatum did turn over four boxes full of documents in response to the subpoena, but the materials were not what the board required.

Tatum, questioned by her attorney, John Wesley Hall, told the judge that she took only materials that belonged to the IPromise Academy program that she operates at 6004 W. 53rd St., also with City of Fire.

The most immediate effect of McGowan's order Thursday was to give Tatum four hours and 45 minutes to turn over the other information sought by the Education Board, the means to access the Internal Revenue Service computer system to figure out how much the school owes in federal taxes.

Tatum is the only person with the user name and password, school officials said. Hall contended that school authorities could have already gotten the information by contacting the IRS themselves.

Later, at 2:46 p.m. Thursday, Tatum turned in the log-in information, Mary Claire Hyatt, an attorney with the Arkansas Department of Education, said in an email.

"We are in the process of verifying it," Hyatt wrote the Arkansas Democrat-Gazette.

Department of Education rules require that when a charter school reports it intends to close, like Covenant Keepers did, the school or its sponsor must provide a property inventory, banking information and an accounting of its debts to the agency within about two weeks.

Covenant Keepers College Preparatory School served sixth- through eighth-graders at a campus at 5612 Geyer Springs Road. The students were transferred to the Friendship Aspire Academy Middle School on West 25th Street after Covenant Keepers was shut down.

According to its most recent publicly available federally required financial disclosure, City of Fire listed $2 million in revenue and $1.9 million in expenditures with $45,693 in net assets. Tatum was paid $138,373, according to the report for the 2016 school year.