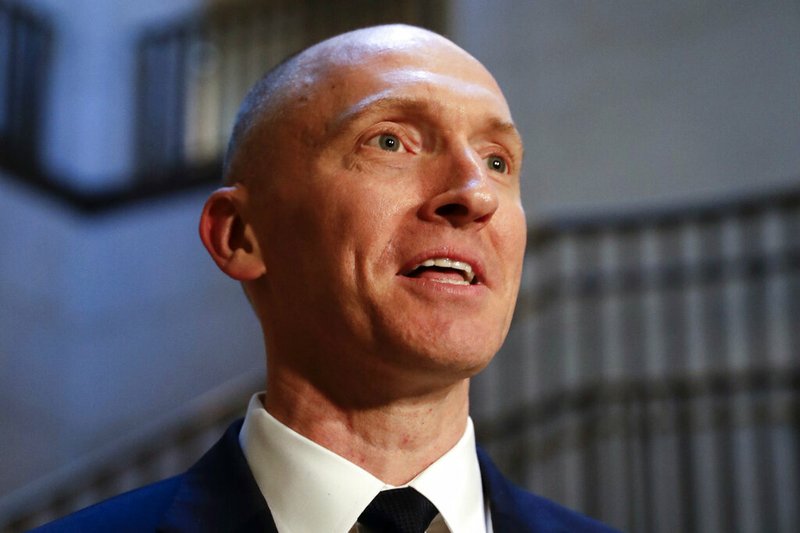 WASHINGTON — An FBI lawyer is suspected of altering a document related to surveillance of former Trump campaign adviser Carter Page, a person familiar with the situation said Friday.

President Donald Trump, who has long attacked as a "hoax" and a "witch hunt" the FBI's investigation into ties between Russia and his 2016 presidential campaign, immediately touted news reports about the accusation to allege that the FBI had tried to "overthrow the presidency."

The allegation is part of a Justice Department inspector general review of the FBI's Russia investigation, one of the most politically sensitive probes in the bureau's history. That election interference probe was ultimately taken over by special counsel Robert Mueller and resulted in charges against six Trump associates and more than two dozen Russians accused of interfering in the election. Inspector General Michael Horowitz is expected to release his report on Dec. 9.

Witnesses in the last two weeks have been invited in to see draft sections of that document.

The inspector general report — centered in part on the use of a secret surveillance warrant to monitor the communications of a former Trump adviser — is likely to revive debate about an investigation that has shadowed Trump's presidency since the beginning. It will be released amid a House impeachment inquiry into Trump's efforts to press Ukraine's leader to investigate Democratic rival Joe Biden at the same time as military aid was being withheld from the country.

The allegation against the lawyer was first reported by CNN. The Washington Post subsequently reported that the conduct of the FBI employee didn't alter Horowitz's finding that the surveillance application of Page had a proper legal and factual basis, an official told the Post, which said the lawyer was forced out.

"This was spying on my campaign — something that has never been done in the history of our country," Trump told "Fox & Friends" on Friday. "They tried to overthrow the presidency."

A person familiar with the case who was not authorized to discuss the matter by name and spoke to AP only on the condition of anonymity confirmed the allegation.

Spokespeople for the FBI and the inspector general declined to comment Friday.

The New York Times and the Post have reported that the investigation is expected to find mistakes by lower-level officials within the FBI but will not accuse senior leaders of being motivated by political bias.

The FBI obtained a secret surveillance warrant in 2016 to monitor the communications of Page, who was never charged in the Russia investigation or accused of wrongdoing. The warrant, which was renewed several times and approved by different judges in 2016 and early 2017, has been one of the most contentious elements of the Russia probe and was the subject of dueling memos last year issued by Democrats and Republicans on the House Intelligence Committee.

Republicans have long attacked the credibility of the warrant application since it cited information derived from a dossier of opposition research compiled by Christopher Steele, a former British spy whose work was financed by Democrats and the Hillary Clinton campaign.

"They got my warrant — a fraudulent warrant, I believe — to spy on myself as a way of getting into the Trump campaign," Page said in an interview with Maria Bartiromo on Fox's "Mornings with Maria." "There has been a continued cover-up to this day. We still don't have the truth, but hopefully, we'll get that soon."

FBI Director Chris Wray has told Congress that he did not consider the FBI surveillance to be "spying" and that he has no evidence the FBI illegally monitored Trump's campaign during the 2016 election. Wray said he would not describe the FBI's surveillance as "spying" if it's following "investigative policies and procedures."

Attorney General William Barr has said he believed "spying" did occur, but he also made clear at a Senate hearing earlier this year that he had no specific evidence that any surveillance was illegal or improper. Barr has appointed U.S. Attorney John Durham to investigate how intelligence was collected, and that probe has since become criminal in nature, a person familiar with the matter has said.

But Trump insists that members of the Obama administration "at the highest levels" were spying on his 2016 campaign. "Personally, I think it goes all the way. ... I think this goes to the highest level," he said in the Fox interview. "I hate to say it. I think it's a disgrace. They thought I was going to win and they said, 'How can we stop him?'"