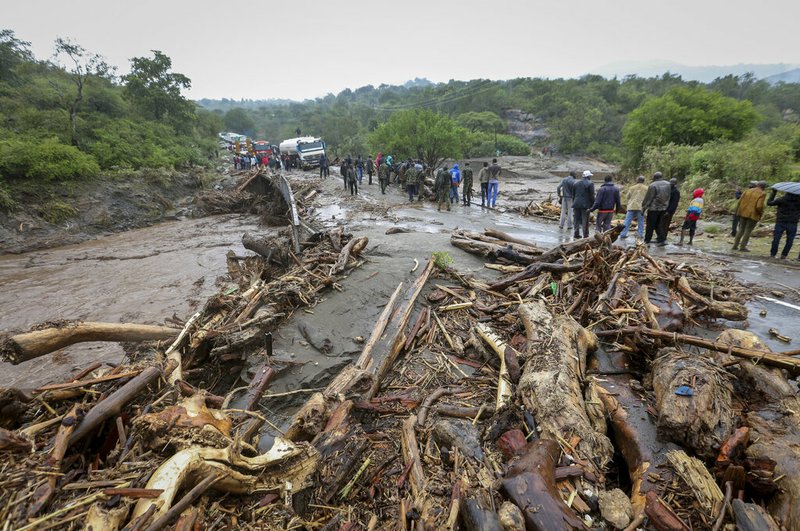 Passengers from stranded vehicles stand next to the debris from floodwaters, on the road from Kapenguria, in West Pokot county, in western Kenya Saturday, Nov. 23, 2019. ( AP )

NAIROBI, Kenya — Kenya's interior minister says 29 people have been killed in mudslides, among the 34 people overall who lost their lives Saturday amid flooding in the East Africa nation.

Heavy rains unleashed overnight floods in western Kenya. Interior Cabinet Secretary Fred Matiangi said 17 people died in a mudslide in the village of Takmal in the Pokot Central district, while 12 others lost their lives in mudslides in the villages of Parua and Tapach in Pokot South.

Five other people died when their car was swept away on the road between Kitale and Lodwar after two rivers overflowed their banks, said West Pokot County Commissioner Apollo Okello.

Matiangi said the government sent military and police helicopters to help those affected by the floods, but the scope of the disaster was not yet clear.

"While rescue and recovery efforts remain the priority, a full assessment into the extent of damage caused continues to be a challenge due to harsh weather conditions," he said.

More than 1 million people in East Africa have been affected by flooding after higher-than-normal rainfall. The latest deaths in Kenya bring to 72 the number of people who have died in a month and a half due to flooding-related causes.

The International Rescue Committee said this month that many people had been reeling from an earlier severe drought in the region. Now rains in parts of Somalia, South Sudan and Kenya are expected for four to six more weeks.

The torrential rain is uncommon for this time of year. Experts have said the changing weather patterns have a huge impact because close to 100% of Kenya's agriculture is rain-fed.