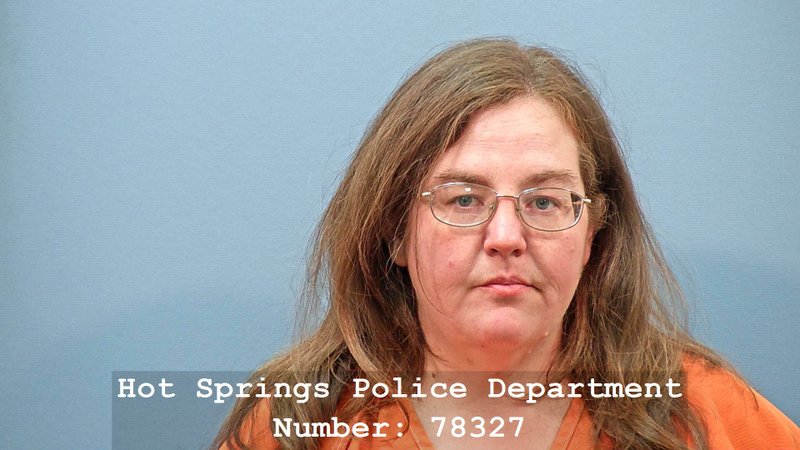 HOT SPRINGS -- A woman was sentenced to two life terms in prison without the possibility of parole after pleading guilty Friday morning to the murders of her 71-year-old mother and her 8-year-old daughter last year.

Melissa Ann Galey, 47, of Hot Springs appeared before Garland County Circuit Judge Marcia Hearnsberger and pleaded guilty to two counts of capital murder for the Nov. 21, 2018, deaths of her mother, Wanda Self, and her daughter, Megan Galey, at their residence at 2208 Lakeshore Drive.

Melissa Ann Galey was sentenced to life in prison on each count, to run concurrently. Prosecutors had previously indicated they planned to seek the death penalty had the case gone to trial.

A third felony charge of arson stemming from Galey's attempt to burn the house down was withdrawn as part of the plea arrangement. Galey has remained in custody without bond since her arrest the day of the murders.

Chief deputy prosecutor Kara Petro said after Friday's sentencing the plea deal was approved by the victims' family, including Galey's surviving daughter, noting that the family "wanted [Galey] to spend the rest of her life in prison without the possibility of being released."

"Ultimately, the family decided that they did not want to go to trial to seek the death penalty for [Galey]," she said.

The family felt "enduring a lengthy capital murder trial" would have put family members through additional trauma and risk re-victimizing those members who would have to testify, Petro said, which "would force them to relive the horrific events of what they observed in that house on that devastating day."

She also said a death penalty verdict would have exposed the family to "many more years of appeals and additional trauma," noting "we were able to give the family closure by resolving the case exactly one year and one day after this horrible tragedy, in large part due to the excellent investigation conducted by the Hot Springs Police Department."

Mark Fraiser, Galey's court-appointed attorney, said the plea deal was in her best interest, noting he felt the state "can and would succeed at trial in finding her guilty" and the only options for the jury would have been the death penalty or automatic life in prison without parole.

Appearing in a brown jail jumpsuit, shackled at the wrists and ankles, Galey stood at the podium during the hearing, answering the majority of Hearnsberger's questions with a simple, "Yes, ma'am," or "No, ma'am."

In attendance in the courtroom were several members of Galey's and the victims' family and several of the detectives and officers who worked the case.

Hearnsberger noted Galey had undergone a mental evaluation and was found to be fit to proceed with trial and culpable for her actions and, when asked, Galey acknowledged she was aware of the findings and accepted them.

Fraiser said a medical evaluation revealed Galey suffered from epilepsy and that an MRI showed she had lesions on her frontal cortex, "a scarring to the tissues," as a result of periodic seizures, but there were no signs of any psychiatric illness or mental disease or defect.

He said he had consulted with outside experts and "found nothing to contest the findings of the psychiatrists who found her fit to proceed."

As part of the proceedings, Petro outlined the case against Galey, noting that on Nov. 21, 2018, police arrived at the Lakeshore Drive residence and saw Galey's daughter in the doorway of the home, "nude and covered in blood," with stab and puncture wounds. There were char marks in the area as if it had been set on fire and a tack hammer and claw hammer were found.

Officers found Self inside a rear bedroom on her back covered in blood with multiple stab and puncture wounds. A knife was on a nightstand nearby.

Galey was found by Sgt. Allen Constant "hiding in the back of a crawl space located underneath the house," Petro said, noting she was also covered in blood and there were char marks in the area indicating a fire had been set.

When questioned later by detective Mark Fallis, Galey admitted to killing Self with a knife and killing her daughter with a knife and hitting her with a hammer. She reportedly told Fallis she had planned to kill both victims "for over a week." She denied having any plans to kill her older daughter.

When questioned about her statement Friday, Galey claimed Fallis must have misunderstood her and said, "I didn't anticipate it." When questioned further by Hearnsberger about whether she had time to "think about it while you were doing it," Galey admitted she did.

Petro said that on Nov. 29, eight days after the killins, Galey's older daughter had visited her in jail and their conversation was recorded. During the visit, Galey admitted to killing both victims and spoke about "getting mad" at Self because "she was taking stuff" and that Galey was "mad at the world."

Petro said DNA from the blood found on both hammers matched Galey's daughter and the blood on the knife "came back as a DNA mixture indicating the presence of two or more individuals," meaning Galey's mother and daughter.

The major female DNA component from blood found on Galey's left hand matched Self. An autopsy listed Self's cause of death was multiple stab wounds, which were found on her face, head, neck, chest and upper extremities. She also had contusions to her right forehead, left forearm and a laceration on the bridge of her nose.

Megan Galey's cause of death was found to be from multiple stab wounds and "blunt head trauma," including five lacerations on the back of her head and one on her front left scalp. She had "deep penetration stab wounds to her head, neck, chest and upper extremities," with internal injuries to her heart, lungs and right carotid artery.