Trump iffy on bill to back protesters in Hong Kong 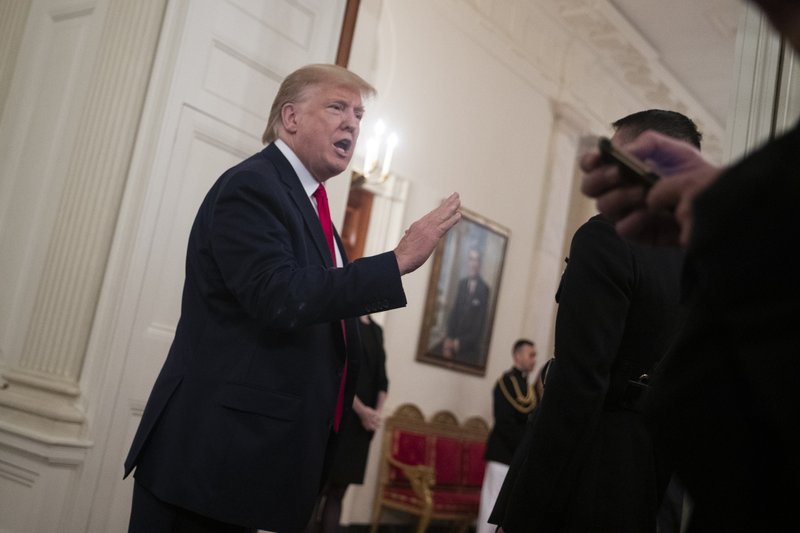 WASHINGTON -- President Donald Trump on Friday wouldn't commit to signing bipartisan legislation supporting pro-democracy activists in Hong Kong as he tries to work out a trade deal with China.

Trump's comments came after the House and Senate this week passed the Hong Kong Human Rights and Democracy Act in reaction to anti-government protests that have convulsed the semiautonomous Chinese city for more than five months.

The bill authorizes sanctions on Chinese and Hong Kong officials involved in human-rights abuses and would mandate the State Department to annually review special autonomous status that the U.S. grants Hong Kong on trade.

"Look, we have to stand with Hong Kong," Trump said in an interview on Fox & Friends. He continued: "But I'm also standing with President Xi [Jinping]. He's a friend of mine. He's an incredible guy."

At an unrelated event later Friday, Trump said he would give the Hong Kong bill a long look.

White House officials did not respond to a request for comment on where Trump stood on the legislation.

Trump said he asked Xi not to send in the military to stamp out the protests. The president added that he told Xi that efforts to quash the protests would complicate negotiations for a U.S.-China trade deal.

China has warned it will retaliate against the U.S. if Trump signs the bill supporting the Hong Kong protests.

Gallery: Scenes from the campus of Hong Kong Polytechnic University

Trump noted that the U.S. and China "are in the process of making the largest trade deal in history."

Trump asserted if it weren't for him, China would have responded to the unrest in Hong Kong with brutality, potentially killing thousands in the process. "The only reason he's not going in is because I'm saying, 'It's going to affect our trade deal, you don't want to do that,'" Trump said.

But Trump's apparent willingness to tie human-rights issues to progress on the trade front drew rebukes from Republicans and Democrats, who said such positioning risked compromising the United States' role as a global defender of democracy.

"Make no mistake: President Trump's words today do not reflect what the American people or the Congress think about President Xi's oppressive policies toward the people of Hong Kong," said Sen. Charles Schumer, the minority leader. "For a guy who promised to be tough on China, President Trump's reliable deference to President Xi is all the more bewildering."

Sen. Rick Scott, R-Fla., said that a veto from Trump "would be a mistake. Congress spoke loud and clear that we #StandWithHongKong." He added, "It's more important than a trade deal."

If Trump decides not to sign the legislation on Hong Kong, it will still probably pass into law.

Congress approved the bill with an overwhelming majority, meaning that it could easily overcome a presidential veto, in what would be the first override of Trump's presidency. Trump also could choose not to sign the bill without vetoing it, in which case it would become law Dec. 3.

Either course of action is likely to generate significant backlash from members of Congress who have urged the president to take a tough stance on China, including Sen. Marco Rubio, R-Fla., a sponsor of the bill in the Senate.

Speaking Thursday on CNBC, Rubio said his understanding was that the president would sign it. "There was a unanimous vote in the Senate and only one vote against it in the House," Rubio said.

In Hong Kong, meanwhile, a court on Friday temporarily reinstated a ban on wearing face masks that targeted anti-government protesters, after an earlier ruling found the law unconstitutional in what had been a rare victory for pro-democracy activists.

The judgment was handed down just days after China's top legislative body, the National People's Congress, said it would step in, if necessary, to overrule the city's judiciary. The warning was seen as the most decisive move yet by Beijing to intervene in Hong Kong's political crisis.

It also came just before citywide district elections Sunday that are being seen as a referendum on the protest movement.

The ruling, by Hong Kong's High Court, said the ban on facial coverings would be brought back for seven days to give the government an opportunity to apply for an appeal. The court said the ruling had been made "in view of the great public importance of the issues raised in this case, and the highly exceptional circumstances that Hong Kong is currently facing."

Dennis Kwok, a pro-democracy lawmaker who had challenged the mask ban in court, said he was "naturally disappointed by the judgment."

"If a law has already been declared unconstitutional and violates the basic human rights of the Hong Kong people," he said, "it should not be enforced at all, not even one day, not even one second."

The court had struck down the ban Monday, ruling that it violated Hong Kong's mini constitution, known as the Basic Law. The decision was a blow to the local government's ability to characterize the continuing protests as a situation requiring the invocation of emergency powers.

Simon Young, a professor at the University of Hong Kong Law School, said the court's ruling to reinstate the ban for seven days was "not normal." He said the Chinese government could directly intervene through an "interpretation," a rarely exercised authority granted by the Basic Law that allows Beijing to decide on the city's legal affairs. Such a move would almost certainly provoke widespread alarm and anger in the territory.

"Beyond seven days, whether the same court or the appeal court will maintain the suspension will no doubt be contested," Young said. But by the time the courts reach another decision on the mask ban, he added, an "interpretation" by the leadership of China's Communist Party may "have rendered these questions moot."

In the six months since the demonstrations began, in opposition to an unpopular bill that would have allowed extraditions to mainland China, the protesters' demands have grown to include calls for more democracy and an investigation into accusations of police brutality.

The extradition bill has since been withdrawn, but Beijing's assertion of authority over Hong Kong has caused concern in the city, where a more transparent court system has been a central feature of the "one country, two systems" policy that promises the territory greater freedoms than in mainland China.

The mask ban, which was enacted in October and had been mostly ignored by protesters, further inflamed tensions in the city and set off a series of violent clashes. The city's chief executive, Carrie Lam, imposed the ban without seeking legislative approval by invoking powers granted under a rarely used emergency regulations ordinance.

Also Friday, protesters trickled out of a besieged Hong Kong university campus as a weeklong siege appeared close to an end.

Half a dozen protesters, holding hands and wearing face masks, left Hong Kong Polytechnic University and surrendered to police around dawn, with two more following shortly afterward, raising to around 30 the number who have surrendered over the past day and leaving only a handful inside.

Police chief Chris Tang called on the remaining protesters to leave, but said there was no deadline to clear them. "The situation is really dangerous inside the campus, we encourage them to come out as soon as possible," he said.

Police have said those who surrender could face charges of rioting, which carry a maximum 10-year prison sentence, and there have been fears of more violence if police storm the campus. So far, though, the police have been content to wait out the remaining protesters, whose supplies are diminishing inside a campus they had transformed into a fortified base.

"Not all of them want to leave," said student leader Owen Li. "They still insist on staying and are refusing to be arrested to avoid any unfair circumstances."

Information for this article was contributed by Aamer Madhani and Kevin Freking of The Associated Press; by Ana Swanson, Michael Crowley and Elaine Yu of The New York Times; and by Simon Denyer, Tiffany Liang and Anna Kam of The Washington Post. 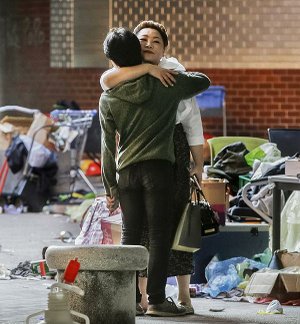 Photo by AP/ACHMAD IBRAHIM
A protester still holed up at a Hong Kong university receives a hug Friday. President Donald Trump said that he is the “only reason” the Chinese military hasn’t routed the protesters. More photos are available at arkansasonline.com/1123campus