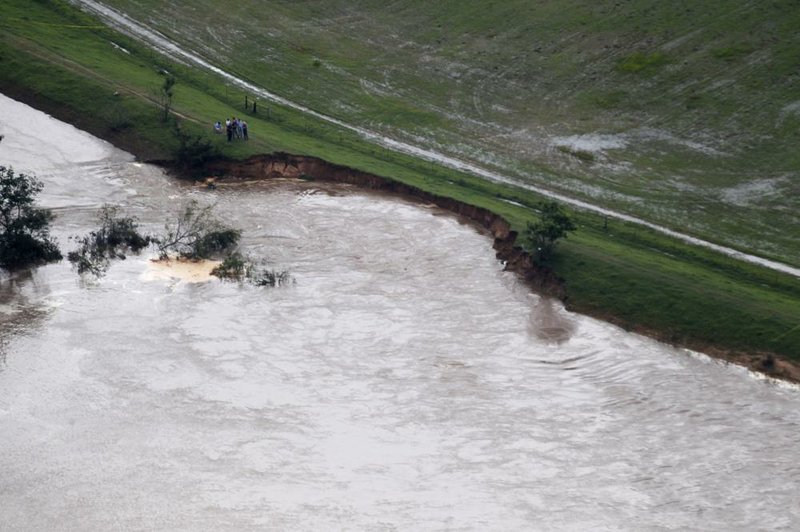 The U.S. Army Corps of Engineers has received $26.7 million to fix damage caused by this spring's Arkansas River flood.

That's part of $119 million total approved that will be disseminated in parts on a quarterly basis through next year.

So far, most of the funds are paying for dredging to aid the McClellan-Kerr Arkansas River Navigation System. Watercraft can pass through now, but not the typical barges that did before the flood. Those barges will drag on the excess mud and other materials without the dredging work, said Jay Townsend, a spokesman for the Corps' Little Rock district.

Eventually, the $119 million will pay for repairing other environmental damage related to the flood, such as stabilizing stream banks. Some of that funding will be supplemental funding for projects that aren't along the Arkansas River but that could have been delayed by work cleaning up after the flood. That includes improvements to Corps campgrounds.

The Corps originally expected to ask for $90 million, but another review prompted officials to up the amount. Coming up with those amounts required extensive surveying, Townsend said.

"We've gone up and down the river multiple times," he said.

The Arkansas River reached historic flood levels in May and June after the Corps released water accumulated from excessive rain in Oklahoma down the river.

The Corps also has asked for $10 million to reconstruct six levees to pre-flood conditions. It's received more than $600,000 for engineering and design on repairs for five of the six levees.

That's only one-seventh of the levees along the Arkansas River. The state has 42 levees there, many of which received damage but will likely be unable to receive federal assistance to repair. That's because they were run by levee districts that did not maintain them to standards high enough to place them or maintain their position in the Corps' Rehabilitation and Inspection Program.

In Oklahoma, the Corps suggested spending $140 million to repair Tulsa levees damaged by the flood. Those costs would have to be borne by local government because the levees were not meeting Corps standards.

Neither the state nor the Corps has estimated the total cost of damage to the levees along the river, according to the Corps, the Arkansas Natural Resources Commission and the Arkansas Department of Public Safety.

The commission is still reviewing applications for the $10 million that Arkansas Gov. Asa Hutchinson made available earlier this year for levee districts, Executive Director Bruce Holland said. Employees are making sure applicants have submitted all required information.

The federal government will make $1 billion available for flood control and another $908 million for operation and maintenance on levees related to damage incurred during the flood, Townsend said.

The Conway district doesn't yet have funding for engineering and design, but Townsend said, "We expect it any day."

Some of those levees had close calls this spring, when leaders thought they could breach.

To get more levees into better shape, the Corps has recommended that levee districts within the same levee system consolidate with each other, if not all of those districts are actively participating in the Corps' Rehabilitation and Inspection Program. A levee system is a system of multiple levees that depend on one another because of their locations.

The idea of merging levee districts has been discussed for months at the Arkansas Levee Task Force, which was created by Hutchinson in June.

Not all members have responded enthusiastically to the suggestion, but some counties hit hard by floods are already merging some of their levee districts.

Yell County Judge Mark Thone is doing so with a few of the county's levee districts. The main levee breach occurred in his county -- the Dardanelle levee, which was not active nor in the Corps' program and now can't be helped by the Corps.

Holland told task force members at their meeting Monday that he doesn't want to force people to do anything, but that consolidation could become necessary.

If life and property is at risk, Thone said, "We might have some teeth there to make people do things."

Pope and Conway counties are also consolidating some levee districts.

Other task force members contended that county judges already have the legal means to remove and reappoint levee board members if they are not upholding their duties.

At Monday's meeting, commissioners also discussed consolidating both legally required levee district reports into a single report but hadn't yet agreed on an ideal date in which the report should be submitted.

The task force meets again Dec. 16 to discuss finalizing their recommendations to send to the governor for improving the state's levees. Those recommendations would be for laws to pass during the 2021 Arkansas Legislative session.