Helena theater's president a fan since she was only 10 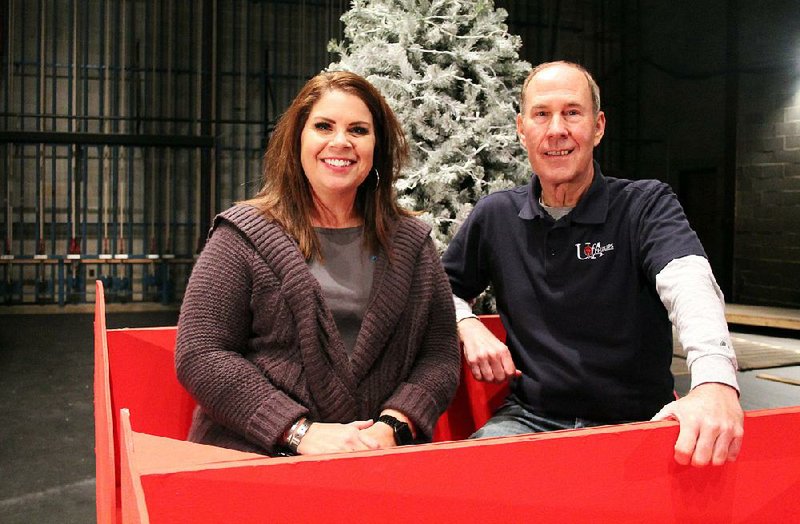 HELENA-WEST HELENA -- Dana Worstell remembers the first time she saw a production by the Helena Little Theatre. She was a 10-year-old fourth-grader at J.F. Wahl Elementary and she and her classmates were bused to Lily Peter Auditorium at what was then Phillips County Community College to see Oklahoma!

It left an impression.

"I can remember sitting there thinking that has to be the most fun thing I have ever seen in my life," the 49-year-old Worstell says.

Now, she is the new president of the nonprofit Helena Little Theatre, the plucky group that turns 85 this year and is gearing up for its Dec. 8 Christmas Extravaganza production.

Worstell's affection for the Little Theatre is obvious. Her first participation in one of the group's shows was when she was attending Phillips Community College and was student director on Crimes of the Heart under director Kirk Whiteside.

She continued to participate in productions, but when her son, Dylan, was in second grade, she stepped away. After he graduated high school Worstell jumped headfirst back in with the Little Theatre crowd, playing a nurse in the spring 2012 production of South Pacific.

"One of the things I enjoy about this is that we're sort of like a band of brothers," she says earlier this month in a room in the Bettye Hendrix Fine Arts Center at Phillips Community College of the University of Arkansas. "There are people I get to spend time with this time of year that I never get to spend time with. We get to spend these nights together practicing, rehearsing and singing. We get in a lot of trouble together."

Robert Murry, who has had small roles in several Little Theatre productions, is part of the chorus in this year's Extravaganza. He is also a Little Theatre board member and says that Worstell has "brought a lot of enthusiasm, for sure. She's full of enthusiasm, and she's had some good ideas, which is great. We like her."

Whiteside, Phillips community college's director of performing arts, teases Worstell during an interview for having missed a pair of recent rehearsals.

"I knew you were going to do this," she says as the two friends chuckle.

Whiteside is the Little Theatre's artistic director and has been at the helm of almost all of its productions for the past three decades.

The Little Theatre was organized in 1934 and produced dramas, comedies and mysteries, according to its website. There were two periods, in the late '40s and early '60s, when the group was briefly dormant. In 1968, it produced its first musical, Kiss Me, Kate. The 1973 production of My Fair Lady was the Little Theatre's first co-production of a musical with the community college and the first at the then-new Lily Peter Auditorium.

Among the titles staged by the Little Theatre are Steel Magnolias, Greater Tuna, Nunsense, Little Shop of Horrors, The Wizard of Oz and others.

In recent years, Little Theatre seasons have usually included two shows. For the past decade or so, the Christmas show is staged every other year along with a spring production. In years with no Christmas production, the group puts on a fall play, usually a comedy.

One of the more memorable productions was the 2017 staging of Mary Poppins, in which Worstell played not only mean Miss Andrew but a chimney sweep as well. And she helped strap lead actress Elizabeth Garcia into the harness that lifted her to flight.

"She flew," says Worstell, still excited about the production. "That was a great show. I was like a kid in a candy store. I loved it."

The Dec. 8 musical -- which is free and is presented by Warfield Concerts, the college and the Little Theatre -- is like "Branson comes to Helena," Whiteside says. "Act One is secular stuff. The set is like an outdoor winter wonderland. We have a fire pit in the middle and benches and a sleigh. Act Two is the sacred section, and we have a barn structure that has the manger scene."

The cast includes 13 adults and 14 children, says Worstell, who is the opportunity center manager for Southern Bancorp.

There are tentative plans to stage Always ... Patsy Cline, in the spring, she says. The theatre presented the two-person show a few years back, and Worstell is keen on reprising her role as Cline's friend, Louise Seger.

"That was so much fun, why wouldn't I do it again? I would take that act on the road."

Finding people to volunteer for productions can be a challenge, especially in Helena-West Helena, where the population has been in decline.

"The downsizing of our community means that a lot of our people are no longer here," Whiteside says.

Murry got involved when his daughters Hannah and Haley took part.

"I was just trying to help, and I turned out liking it," he says. "It's something I wish other people would do. People should try different things; put on a different pair of shoes and see how you dance."

The theater is important, Whiteside says, as "an outlet for those people who have talents and gifts to share them with the community, and it gives audience members a chance to see live theater without having to drive to Memphis or Little Rock."

The group gives out two scholarships to aspiring drama students and also provides two full scholarships to its summer Young People's Workshop in the Arts in memory of Eloise Kalb, a longtime Little Theatre member and director.

"We want to get more kids involved," Worstell says. "That bus trip when I was young, that's why I'm still involved. There is nothing like it." 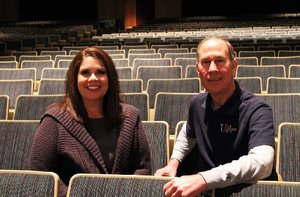 Photo by Sean Clancy
Dana Worstell and Kirk Whiteside of the nonprofit Helena Little Theatre sit in Lily Peter Auditorium, where the Little Theatre’s Christmas Extravaganza will be staged Dec. 8.

Print Headline: Helena theater's president a fan since she was only 10