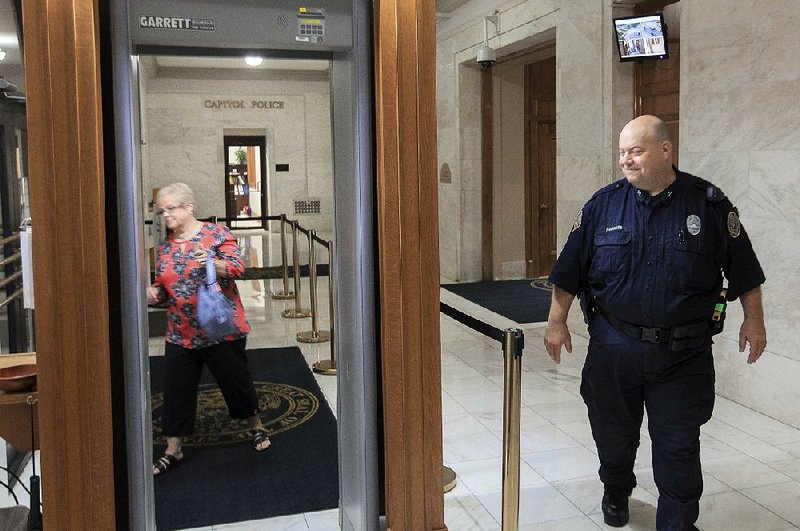 Brad Hartness of the State Capitol Police greets Jeannie McCarroll at an entrance to the Capitol in 2015. Some people, including lobbyists and others who don’t have offices in the Capitol, have been receiving electronic cards so they can avoid the security detectors, but a new policy by the secretary of state’s office will begin limiting the number of cards.

Secretary of State John Thurston's office has instituted a new policy aimed at limiting the number of people who have electronic access cards that allow the holders to avoid the metal detectors at main entrances of the state Capitol.

Several state senators were surprised to learn last week that lawmakers have been able to obtain the cards for lobbyists and other people who don't work in offices at the Capitol. They suggested that an end be called to that practice.

The electronic key card is "a computerized alternative to mechanical locks and keys that is based on a presentation of a card or other device in order to obtain entry," under the policy.

Officials for the secretary of state's office declined last week to say how many total cards have been issued, including for people who don't work in offices in the Capitol.

Capitol Police Chief Darrell Hedden said he can limit which entrances can be accessed with the cards and when the cards can be used.

"The previous administrations have been free flowing in cards," Hedden told the Senate Efficiency Committee during a meeting last week.

"The policy is to stop the free flow of cards," he said. "Everybody has an investment in security of the building. You do, I do. All agencies do."

Sen. Jonathan Dismang, R-Searcy, who has served in the Legislature since 2009, said he didn't know until recently that the cards were available to people who don't have offices in the Capitol.

That became evident when a lobbyist entered the building with an access card, while Dismang went through another door with metal detectors because his card didn't work, the senator said.

"There shouldn't be a political bias on who gets a card and who doesn't get a card," said Dismang, who is a former Senate president pro tempore.

"If you are giving us the latitude to go that far based on people who we recommend to have cards or whatever, I think you are going to find yourself in a bind someday if someone doesn't get a card that wants a card because they couldn't get sponsored and the lobbyist for the opposite side of that organization ... does have one," he said.

Dismang said he hasn't given anybody an electronic access card and doesn't intend to unless it's for his wife.

But, Hedden said, "There are other legislators that have" sponsored cards for others.

Sen. Bob Ballinger, R-Berryville, who has served in the Legislature since 2013, said, "Every year, it seems like we have taken another step to try to tighten security, so this basically is natural progression on top of that.

"It seems like a good step. Now, the question is, is it enough?" he said.

"As it is now, all you have to do is hang around either end of the building and wait a while and somebody is going to let you in," Ballinger said. "I know it is not supposed to be like that."

Dwight Southerland, the secretary of state's chief of staff, said it isn't a new practice to allow lawmakers to sponsor people for the electronic access cards.

"We wanted to accommodate currently what is in practice, but [with] some control on it, so going forward we did have control over those cards," he said.

Hedden said that under the new policy, new employees in the Capitol obtain access cards when an administrator in their offices fills out a form.

The new employees get the card for free, but if the card is lost or stolen, the replacement fee is $15 per card. Those who don't work in the Capitol pay $25 to cover the cost of a background check.

Lawmakers and the state's constitutional officers are allowed to sponsor people who don't work in the Capitol to get the access cards, he said.

"Say lobbyist Mr. Smith comes to you and says, 'Hey could I get an access card,' if you are willing to sign a sponsorship for that lobbyist, then he has to go and fill out another form. It's a criminal background check," Hedden said. "They are going to pay $25 for that background check and the card. Now if they come back with a criminal record, we are not going to give them a card at all and we are not even going to tell them why we are not going to give them the card because by law we can't.

"They can go get that information from somewhere else, but if you are willing to sponsor the person they have another step to go through," he said.

Sen. Joyce Elliott, D-Little Rock, said, "One hundred thirty-five people is a lot of people to be making that decision."

She was referring to the 100 House members and 35 senators.

That's "an excellent point," said Bill Huffman, chief deputy secretary of state. "I think we should visit with the House and revisit that point."

"My concern is once someone has a key card access and I'm a lobbyist, it is a pretty special thing to show all of your clients through the side door and they don't ever have to pass through the metal detector," Dismang said. "That's my concern. It's not one person in, one person out. It is one person with 15 others."

Officials in the secretary of state's office declined to tell the Arkansas Democrat-Gazette how many security cards have been issued.

Asked for a rough estimate of the total number of people with the cards, Hedden said Tuesday that he wasn't sure if state law would allow him to provide that information.

Without citing any numbers, Hedden said, "I don't think there is very many non-employees that have cards and the reason I say that is most of the people that were issued cards in the prior administrations was before the last [regular legislative] session [earlier this year] and during that time."

"They were given a year on the card and they should be expiring out within this month, next month, probably by the end of January," he said.

This newspaper subsequently submitted a written request to Thurston's office for the number of cards issued, and asked the numbers be broken down by elected officials, state employees, lobbyists, media employees and those who don't work in an office in the building.

For example, three Democrat-Gazette Capitol bureau reporters have these cards.

In response, Thurston's spokesman, Chris Powell, wrote that the information falls under the Capitol Police exemption to the state Freedom of Information Act.

Under Arkansas Code Annotated 12-14-109, a record or other information related to the operations, emergency procedure and security personnel of the state Capitol Police is confidential and not subject to disclosure under the Freedom of Information Act of 1967, including "records or other information that upon disclosure could reasonably be expected to be detrimental to the public safety, including without limitation records or other information concerning emergency or security plans, State Capitol Building or Capitol Hill apartment complex safety plans, monitoring capabilities, procedures, risk assessments, studies, measures or systems."

Powell declined to elaborate on how disclosure of the requested information "could reasonably be expected to be detrimental to the public safety."

Hedden told the Senate Efficiency Committee that a former senator had seven electronic access cards for seven people at one point, and "these cards do not only access the Capitol building, but they also access Capitol Hill" apartments for lawmakers.

That ex-senator, whom he declined to name, asked if a friend could have a card so the friend could stay for a week in the lawmaker's apartment in the Capitol Hill building. The friend's sick child was at Arkansas Children's Hospital in Little Rock, Hedden recalled.

"I did not want to dictate to him [and say], 'No, sir, we are not helping this family out, period,'" Hedden said. "I don't think it is my responsibility as the Capitol police chief to dictate who we are going to let in your office. That's your office."

"We should have the conversation about Capitol Hill. Capitol Hill is being rented by the members," Dismang said. "That's not the state Capitol. That is a very different circumstance in my opinion."

Kenneth Burleson, chief legal counsel for Thurston's office, said the office welcomed a discussion with lawmakers about the access cards.

"I think it is important we have buy-in from both the Senate and the House," Burleson said, because otherwise lobbyists will be asking lawmakers for help in getting the cards.

"If everyone knows there is a buy-in from the legislative level, then we are not going to have to deal with that from both of our perspectives," Burleson said.

House Speaker Matthew Shepherd, R-El Dorado, said in an interview that he needs to visit with the secretary of state's office about its new policy because "I'm not familiar with the ins and outs of the policy."

He said he also wanted to consult his fellow representatives.

Since becoming secretary of state in January, and during his time as the state's land commissioner from 2011-19, Thurston has not asked the Capitol Police agency to grant access cards to any non-employees, Powell said.

Lt. Gov. Tim Griffin, Attorney General Leslie Rutledge and Land Commissioner Tommy Land also have not asked the Capitol Police to grant cards to any non-employees, according to officials for these offices.

Treasurer Dennis Milligan's wife, Tina Milligan, is the only person not employed by his office who has a card for the Capitol, said Milligan's spokeswoman, Stacy Peterson.

"They are on call 24/7 to respond to IT emergencies, thus require access. The card is assigned to their employee who is dedicated to our account. This is the only instance," he said in an email to this newspaper.