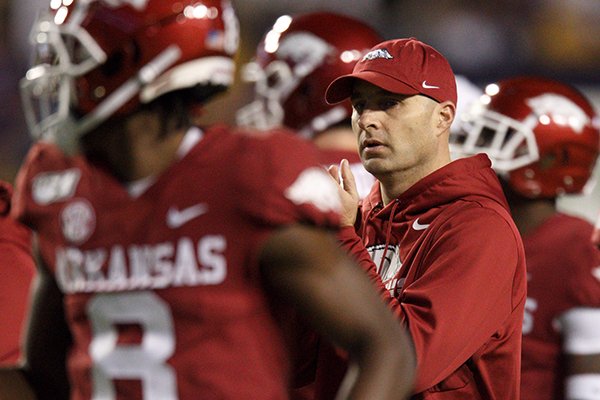 Arkansas interim head coach Barry Lunney Jr. is shown during warmups prior to a game against LSU on Saturday, Nov. 23, 2019, in Baton Rouge, La. ( Ben Goff)

• The quarterback depth chart this week is KJ Jefferson OR Jack Lindsey OR Nick Starkel.

• Our charge beginning in the locker room after the LSU game has been to play our best football game on Friday against Missouri. It's been a tough three years for this program and the fans. My vision as the acting head coach and a former Razorback is to put aside the last three years and unite for 3.5 hours and have a moment as a state. It hasn't gone the way we wanted it to go, but we have another opportunity to rally together and unite our fans and football team to create an atmosphere and result we're proud of.

• Quarterback: We're evaluating those guys. A short week creates a little more challenge there. I think we'll know a little more tomorrow about where this is heading.

• Missouri has lost some close and competitive games. Barry Odom is a tough coach and the team takes on his personality. We've had our challenges at home. They can still get to their sixth win, but there's a trophy on the line. There's plenty to play for.

• As far as Jack Lindsey goes, I've known him for a long time. He just kind of stays in the corner and stays quiet, but he just knows what is going on. He knows the offense in and out and knows where to get the ball. He's a football junkie and has a really good football IQ. In his first action at quarterback, he handled it very well. I was happy for him and I know it was a cool moment.

• The health of our players and staff is our top priority right now, and it always is. We're going to be as proactive as possible. I had chicken pox twice as a kid. I don't think I've ever had the mumps.

• Very aware of the three Fayetteville kids who are at Missouri. It's probably a little bit unique and strange for them as well. They had some pretty strong connections to this program, but it didn't work out here. They've done some good things at Missouri. They're great kids and I'll always root for them, except for this week.

• On the rivalry: There's not a player on this team that has beaten Missouri. That's a rivalry. That's got to mean something to them. There is a lot to play for. People are going to say there isn't a lot to play for because you're 2-9 and you have an interim coach. I would beg to differ. We lay out a lot of things: It's 1 of 12 games. You can't get ready to play after you work all summer for this? We're at home in Little Rock, too, playing an SEC game. We haven't won an SEC game there since 2011, I believe. Seniors, it's your last go around. They're going to be acknowledged. If you care about these seniors, you'll go all in on this game. We've lost 18 straight SEC games, and seven have been by one score or less. We've got a chance to break that streak. That sounds like to me there's a lot to play for. Those are just the facts. Pick out the one you want to pick and let's go play, because Missouri is going to be ready to play.

• It seems like forever ago that Jonathan Nance was a part of our program. I don't remember a lot about his game, but the most obvious thing he did was make some big plays against Texas A&M in 2017. He got behind them a couple times and broke the 100-yard mark, and he's done some good things there with Missouri. It's not necessarily groundbreaking that we are playing against a guy we're familiar with. I don't expect to have to change anything in terms of signals or calls.

• We've changed up some things like meeting schedules, meals and practice. My fingerprint, I wanted to put that on this team. I've implemented some changes and I think they've been noticeable to players. The players have been great with the changes. A short week causes some more changes. I think they enjoyed it when we had some Popeyes the other day.

• Kelly Bryant is a playmaker, there is no doubt about that. He has a great cast around him, too, so we have a great challenge ahead of us on Friday.

• What does the next coach have to do to be successful here: You've got to recruit here. More than that it is about development. You've got to tighten up your radius in terms of recruiting, but at the end of the day you better recruit the kids then develop them. Identify those players who can help you win games whether it is immediately or three years from now. Get the kids inside the borders, then beat the bushes for them. Then you start moving outside your radius. It's about recruiting. You have to get it right. That's the critical part. You've got to coach them up and have somebody who has a plan and build it up steadily. He doesn't have to necessarily have to be from here, but there should be an understanding of the program and its history.

• We're not going to go on the field until about 8 p.m. tonight. That will give us some time to gameplan, and there are also so class conflicts. We want to make sure when we're out there that the plan is not 50 percent done or 75 percent done. Quick turnaround on Tuesday at normal time. We're going to have Thanksgiving lunch with players and family, then we'll hit the road.

• On the defense: I was impressed early on with how we competed hard. I think we all saw we ran into a fantastic football team. They're more impressive in person than they were sitting on my couch last weekend. Despite playing really hard, we got in some spots where we became vulnerable to a great offense. Let's play our best defensive game this week for 60 minutes. We have to eliminate and purge the big plays on Friday. I saw some moments when I was really impressed.

• I'm always going to be partial to kids who grow up in this state because I was one. Saturday was about Razorbacks football for me, and when I got a chance to come here and live out a dream, I was vested and my community was vested in my success. There are players in this state who can help you maybe not right away but in Year 2-3. Is there a foundation of guys in this state you can build around? There is no doubt in my mind. We need them here.

• I think it's pretty easy to approach this week knowing we're probably not going to be together as a staff after Friday. It's about the players. We want them to experience the success we had as players. I think you just have to look yourself in the mirror and understand you got into this for the players. We have to give them our best, too. I've been pleased with the efforts of the coaches this week. We're focused on Missouri. There's not a lot of down time right now, not that there is a lot in coaching anyway.

• John David White is a kid whose family is rich in Arkansas tradition. Not all the guys who are going to help you are going to be scholarship guys. White and Jack Lindsey, they came here on their own dime, but they're important to the success here. You recruit those kids. I couldn't be prouder for JD White. He epitomizes what it means to be a Razorback.

• I hope for our fans and the people who are on the fence about coming to this game, I hope they come out. We'll have a football team and a fan base that will unite and show that true Razorback spirit this state really has. My time in high school, I got to play in a state title game there. My father coached in 11 state title games as a coach. War Memorial is a special place for me and my family. Some of my greatest moments are in that stadium as well. I just want our guys to experience that on Friday. I want them to walk away on Friday with their moment.

• We are riding the bus to and from Little Rock. That's the way I remember it. I'm looking forward to getting on the bus with the police cars in front of us. Lunney choked up thinking about getting on the bus. Rain, sleet, snow, fog, grab a poncho and let's get in there.