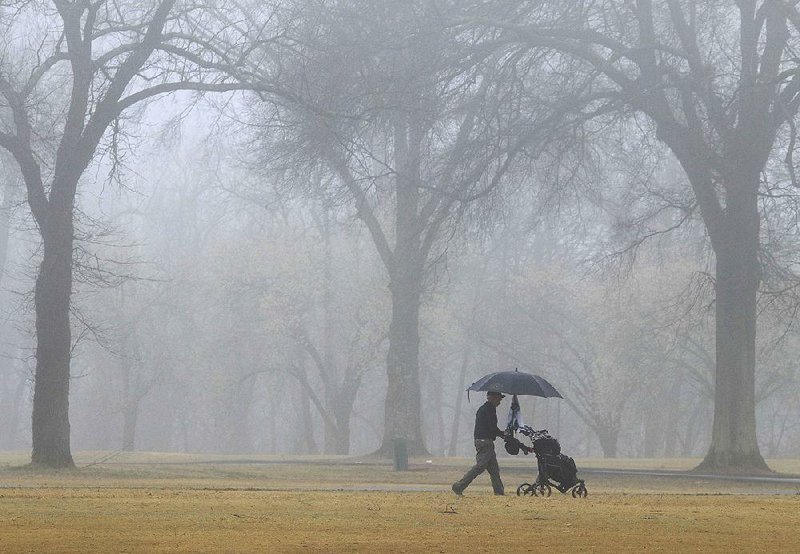 Ralston said the bump comes at a good time because revenue in the first seven months of this year was down $51,063.28 compared with the same period in 2018.

Officials attributed the drop in revenue to spring flooding along the Arkansas River that left much of the course under water.

"We lost $30,000 to $50,000 in revenue because of it," Hartwick said. "If that didn't happen, we would have been close to our expected revenue already because our memberships are up."

Officials cited various reasons for the increase in memberships but recognized that the closing of two city-owned courses in Little Rock, War Memorial Golf Course and Hindman Park Golf Course, played a significant role in the uptick.

Ralston said that over the past 10 years, multiple golf courses have closed in central Arkansas, leaving Burns Park as one of the few remaining public options in the area.

"The courses closing in Little Rock really helped us," Ralston said. "We are seeing a lot of new faces. A lot of those new faces are coming here from the closed Little Rock golf courses."

Earlier this year, Little Rock Mayor Frank Scott Jr. announced that the city would cease golf operations at its War Memorial and Hindman courses -- two of Little Rock's four city-owned golf courses -- as part of budget cuts and would repurpose the areas. The city's four courses, including The First Tee of Central Arkansas and Rebsamen Golf Course, lost about $1.2 million collectively last year.

Rounds at Rebsamen have increased slightly, officials said, but the uptick doesn't equal the number of displaced golfers from the War Memorial and Hindman courses.

"It's definitely not equal," Little Rock Parks and Recreation Director John Eckart said Friday. "There's an increase, but we're not absorbing all of those."

Rebsamen's numbers for August paralleled those of 2018, and over the next two months they were slightly higher than the previous year. Golfers played 3,009 rounds in August compared with 3,095 rounds in August 2018. Ninety-two more rounds were played in September than in the same month a year ago, and about 500 more rounds were played in October compared with the same period in 2018.

George Earls, facility supervisor at Rebsamen Golf Course, said the course has seen "a little bit of an increase" since the War Memorial and Hindman courses closed, but the riverside course lost revenue because of a 30-day closure caused by flooding along the Arkansas River from May 26 to June 25.

"Besides that, we started seeing increases because we're still honoring the passes," Earls said.

The city did not begin tracking rounds and revenue until July at First Tee, the public golf course off University Avenue that is the site of a nonprofit that aims to teach children life skills through golf.

The nonprofit managed the course's operations and maintenance until July; it's now managed by the city parks staff.

The course has had between 300 and 1,000 players each month from July to November, Eckart said. Those numbers don't include participants in the youth program.

Historically, the amount of money Little Rock has spent to maintain its public courses has outpaced the amount of revenue brought in by the courses. In 2018, the city spent nearly $2.6 million to support the four courses, which collectively accounted for about $1.4 million in revenue. The courses also saw deficits in 2017 and 2016.

Eckart said he couldn't remember the last year that the courses broke even, but it was likely in the early 2000s.

"We will subsidize golf this year," he said. "It will just be at a much lower rate."

According to a presentation on the 2020 budget that the Little Rock Board of Directors is set to vote on Tuesday, the city plans to spend about $1.5 million on golf next year, which is $508,010 less than it plans to spend in 2019.

Golf isn't profitable for North Little Rock, either, but city officials there said they are fine with that.

"The golf course is a great attraction for the city," Ralston said. "We talk all the time about how a golf course is one of the only things you have to continually improve just to stay level."

"We budget to take a loss when it comes to the golf course because it's an asset to the city," he said. "The first thing people ask when they come to see the city is how are our parks and how many golf courses do we have. When Caterpillar came here, they immediately asked about our golf courses."

The Burns Park course has undergone an expansive makeover that included resurfacing the golf cart paths, adding new tee boxes, improving greens and landscaping the fairways. Burns Park is also offering discounts to golfers who had previously paid for membership at the closed courses in Little Rock, Hartwick said.

Ralston said he hopes a new membership format and cleaner golf courses will help lure even more of Little Rock's displaced golfers across the Arkansas River.