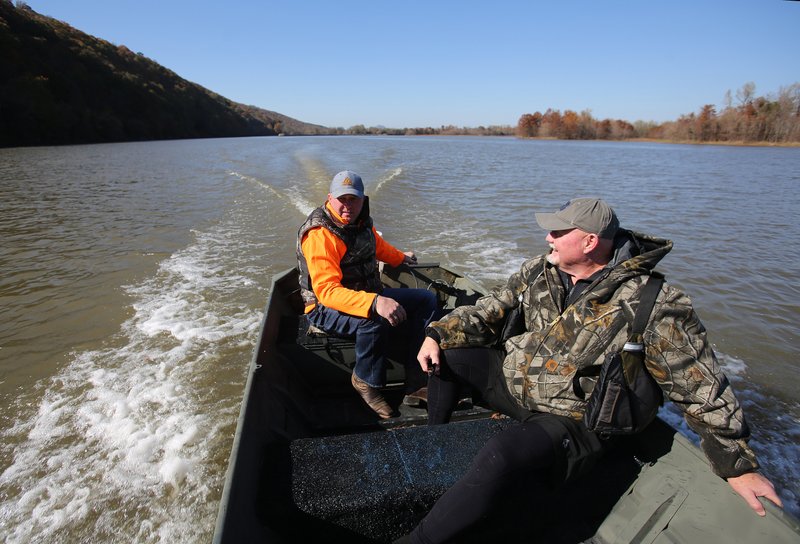 Arkansas Democrat-Gazette/THOMAS METTHE -- 11/15/2019 -- Andy Holmes (left) and his father, Danny, cruise down the Little Maumelle River near Two Rivers Park in Little Rock, on Friday, Nov. 15, 2019, as they test out a rebuilt engine on their boat in preparation for duck season. "It's better to find a problem now, than four in the morning on the opening day of duck season," said Danny Holmes. ( Arkansas Democrat-Gazette / Thomas Metthe)

Delays in the repair of a washout in Payneway Dam on St. Francis Lake may impact the amount of water available for duck season on St. Francis Sunken Lands Wildlife Management Area.

Jessica Homan, an Arkansas Game and Fish Commission wildlife biologist, said contractors with the U.S. Army Corps of Engineers arrived two weeks ago to begin rebuilding the washed out area because it had settled lower than its desired height after the original repair.

"They also needed to top the washout with stone and commercial base so rock trucks could haul 2-ton riprap to the opposite side of the washout, where more repairs are needed," Homan said. "Their plan was to do this work so Game and Fish could go forward with moving the water level to 212 feet above sea level on Nov. 15 to flood the hunting area."

Homan said the 7 inches of rain during the first week of November caused water to top the washout and prevented any work.

"Contractors got back to work Monday, but sank a trackhoe on the downstream side of the washout," she said. "We have to maintain the river at a lower stage right now for them to be able to dig out the equipment and resume work."

If everything goes smoothly, water can again reach the 212 mark needed to flood some of the hunting land on the management area.

"We're hopeful we can get some huntable water on the area for the first part of duck season, but additional rain may cause another delay if we're not lucky," Homan said. "Once they've recovered their trackhoe, Corps contractors will need the water level no higher than 212 feet above sea level until they complete their work, which they say may take up to 7 weeks with no further delays."