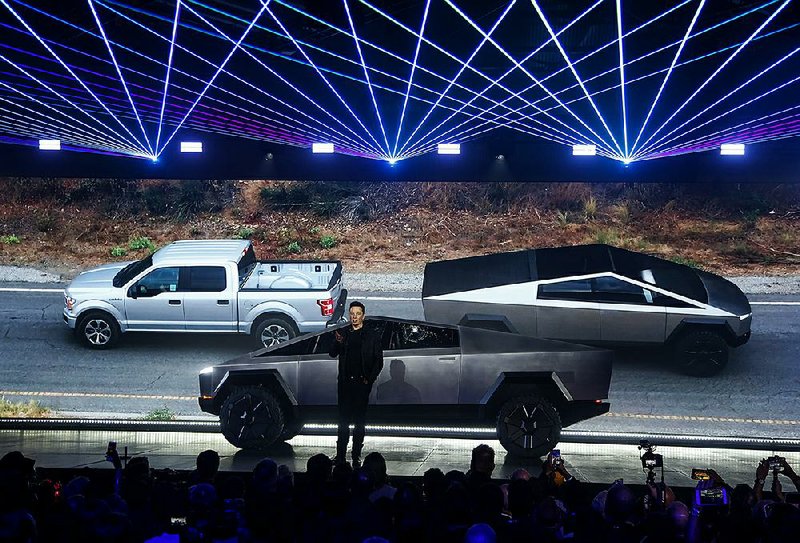 Tesla Chief Executive Officer Elon Musk introduces the Cybertruck last week in Hawthorne, Calif., as a video shows a tug of war between the pickup and a Ford F-150.

Tesla Inc.'s Elon Musk plainly said his pickup is a "better truck than an F-150." Ford Motor Co. is taking issue with that claim.

While releasing a series of specifications last week for the Cybertruck, Musk called up a video of the the pickup in a tug-of-war against Ford's best-selling F-150. He tweeted a clip of the test on Sunday showing his vehicle pulling a screeching Ford model backward up a hill.

Ford thinks Musk was making an apples-to-oranges comparison. The video the Tesla chief executive officer tweeted appears to show a two-wheel drive version of the F-150 against an all-wheel drive Cybertruck. Other details that could have factored in which pickup won out include curb weight and tire type.

Sundeep Madra, vice president of Ford X, the automaker's unit for developing new business models, challenged Musk on Monday to send Ford a Cybertruck. He linked to a post by the car-enthusiast site motor1.com that questioned whether Tesla's test was "fair game."

Tesla and Ford have been at this before. More than a year after Musk tweeted a boast about how much weight Tesla's truck would be able to tow, Ford released a promotional video of an electric F-150 prototype pulling more than 1 million pounds of double-decker rail cars.

As for the embarrassing, glass-cracking flub during Thursday's demonstration of the Cybertruck's "Tesla armor glass," Musk said Sunday that it was a mistake to start with the sledgehammer.

Musk had described the futuristic pickup as "really tough -- not fake tough." But two of the Cybertruck's supposedly unbreakable windows shattered when lead designer Franz von Holzhausen hurled a steel ball at them during the presentation, to Musk's dismay and the Internet's delight.

Musk said the "armor glass" was weakened by another strength test that preceded the steel ball: when Von Holzhausen whacked the Cybertruck's door with an orange sledgehammer. That blow did no damage to the truck's stainless steel skin, but it did damage the glass, he said.

"Sledgehammer impact on door cracked base of glass, which is why steel ball didn't bounce off," Musk tweeted Sunday night. "Should have done steel ball on window, then sledgehammer on the door. Next time .... "

Musk also tweeted a slow-motion video of Von Holzhausen performing the steel ball test before launch. It glanced off like a rubber ball.

The steel ball test was one of many over-the-top moments in the pickup's unveiling, which also involved extensive pyrotechnics and a hologram of Musk. The vehicle and the theatrics of its debut fueled a maelstrom of memes and criticism from those who scorned the Cybertruck's wedge-shaped design, which Musk had warned "may be too futuristic for most people." But the chaos did not obliterate interest: Tesla has already received 200,000 orders for the Cybertruck, despite "no advertising & no paid endorsement," Musk claimed Sunday.

The Cybertruck's steep angles have the Internet drawing comparisons between it and the DeLorean from the film Back to the Future, the Batmobile, the much-maligned Pontiac Aztek and an actual doorstop. He attributes its lack of curves to the machines that make it; they aren't strong enough to bend the ultra-hard steel, which is produced by Musk's companies. He plans to use the same alloy for SpaceX's Starship rocket.

"Reason Cybertruck is so planar is that you can't stamp ultra-hard 30X steel, because it breaks the stamping press," Musk tweeted. "Even bending it requires a deep score on inside of bend, which is how the prototype was made."

Information for this article was contributed by Keith Naughton and Dana Hull of Bloomberg News; and by Taylor Telford of The Washington Post.