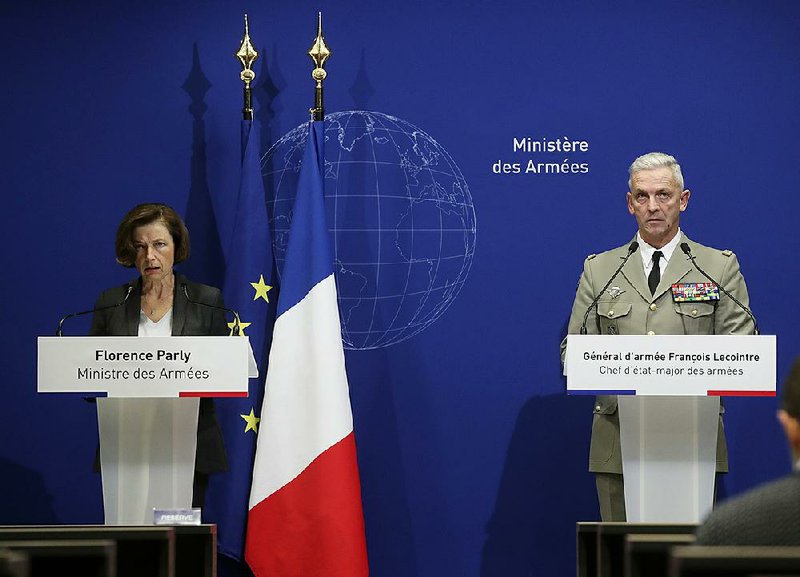 The deaths draw new attention to a worrying front in the global fight against extremism, one in which France and involved countries have pleaded for more support. In a surge of violence this month, attackers often linked to the Islamic State group have killed scores of troops in West Africa's arid Sahel region.

French President Emmanuel Macron expressed "deep sadness" after the Monday evening crash. It was France's highest military toll since 1983, when 58 paratroopers were killed in a truck bombing in Lebanon.

The military said the helicopters were flying very low when they collided and crashed in Mali's Liptako region near Niger while supporting French commandos on the ground pursuing extremists. No one on board survived.

French Defense Minister Florence Parly said the helicopters were operating "in the total darkness, which made the operation much more complicated." The helicopters' flight data recorders have been found and an investigation has begun.

BEIJING -- Taiwan detained two executives of a Hong Kong company accused of acting as a front for Chinese intelligence agencies working to undercut democracy in Hong Kong and Taiwan, the official news agency there reported Tuesday.

Taiwan's Justice Ministry ordered the two executives, Xiang Xin and Kung Ching, to remain in Taiwan while investigators looked into the assertions of a would-be defector in Australia that their company, China Innovation Investment Limited, acted on behalf of Chinese intelligence agencies.

The defector, Wang Liqiang, said he worked for the company and took part in -- or knew of -- covert operations that included buying media coverage, creating thousands of social media accounts to attack Taiwan's governing party and funneling donations to favored candidates of the opposition party, the Kuomintang.

Wang detailed his accusations in a 17-page appeal for asylum in Australia, where his wife and child had previously moved to study. While some analysts have raised doubts about Wang -- who the Chinese say was convicted of fraud -- two people briefed on his appeal in Australia said his claims were considered serious and reliable enough to warrant a deeper investigation.

If charged, the two men could face up to five years in prison.

In a statement posted on Twitter, the ministry said more than 20 others were wounded in the explosion in the village of Tal Half, near the city of Ras al-Ayn.

The ministry blamed the attack, the latest in a string of deadly car bomb attacks in the area, on Syrian Kurdish fighters.

Ankara views the Kurdish fighters as terrorists for their links to a Kurdish insurgency inside Turkey. The fighters had however partnered with the U.S. against the Islamic State group.

In a major shift in the power balance in oil-rich northeastern Syria, U.S. troops pulled back from the border with Turkey to avoid clashes with a NATO ally, opening the way for the Turkey-backed invasion.

German jewel theft not as bad as feared

BERLIN -- The thieves who carried out a nighttime robbery of a German museum's unique collection of 18th-century jewels got away with less than initially feared, officials in the eastern city of Dresden said Tuesday.

The director of Dresden's Green Vault, Dirk Syndram, said the thieves who broke into the museum early Monday seemed to have snatched only what they could reach through holes punched with an ax into three compartments of a display cabinet before making a hasty exit.

Among the items taken were a large diamond brooch, a diamond epaulette, and other treasures, Syndram said.

He didn't give a complete list of what was gone and said only that the losses were culturally "priceless."

Of some 100 dazzling pieces, many were left behind, including diamond-encrusted shoe buckles and buttons, the queen's pearl necklaces, and a diamond-studded sword.

"You don't see me relieved, but still far less frustrated than I felt yesterday when police said the glass case was empty," Syndram said. "It's not empty."

The Green Vault is one of the world's oldest museums. It was established in 1723 and contains the treasury of Augustus the Strong of Saxony, comprising around 4,000 objects of gold, precious stones and other materials. 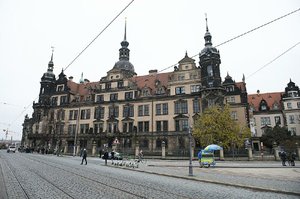 Photo by AP/dpa/SEBASTIAN KAHNERT
People on Tuesday walk past the former royal palace that houses the Green Vault museum in Dresden, Germany.