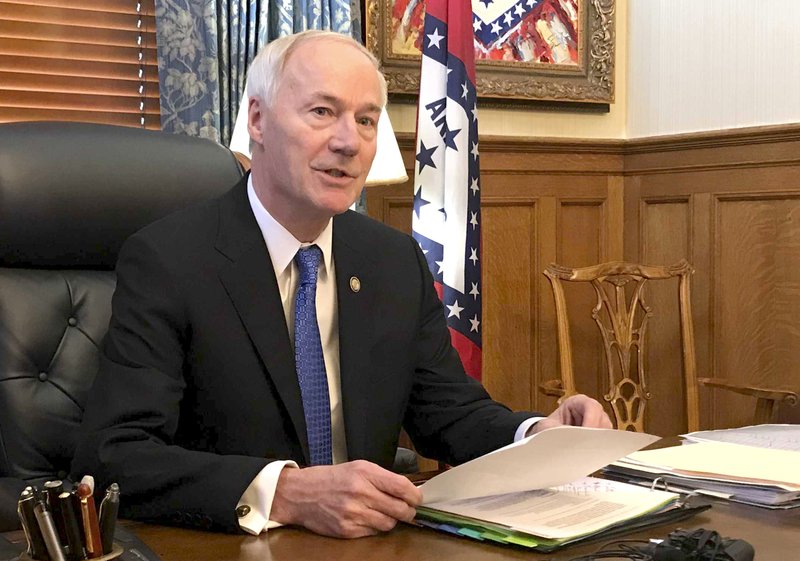 Gov. Asa Hutchinson said Tuesday that his top 2020 campaign priority is winning voter approval for a proposed constitutional amendment to make permanent the state's half-percent sales tax for highways and roads, and his attention won't be diverted from that goal.

"This is my No. 1 priority in terms of a state campaign here in Arkansas," the Republican governor told more than 100 people attending the annual meeting of the Arkansas Good Roads Foundation in Little Rock.

"Not anything is going to distract me from it," he said. "This is a focus because it is so critical to the future of our state."

Afterward, Hutchinson told reporters that he's expressed his opposition to proposed ballot measures to legalize recreational marijuana and he'll continue to express his view on them, but he's committed to pushing for voter approval of the half-percent sales tax permanent extension. He is a former director of the U.S. Drug Enforcement Administration under President George W. Bush.

The "Vote for Roads. Vote for Issue 1" committee will promote the proposed constitutional amendment on the road tax. The tax was originally approved by voters in November 2012 and is set to expire after 10 years.

Asked whether he plans to contribute money out of his Asa PAC to the "Vote for Roads. Vote for Issue 1" committee, Hutchinson said, "I will make that decision down the road."

"We want to raise money. I will be engaged in helping to raise money for this. Asa PAC is designed to support legislative candidates, but also ballot initiatives, so we'll just wait and see how that goes," he said.

In its latest quarterly report filed on Oct. 15, ASA PAC reported a balance of $153,110.37 after receiving $4,015 in contributions and and contributing a total $4,500 to four Republican legislators and three Republican groups in the quarter that ended Sept. 30.

Hutchinson previously estimated that it would take at least $2.5 million to run an effective campaign to advocate for voter approval of Issue 1.

"I always try to stay out of those, but I have expressed my support in one race up in Jonesboro," he said referring to Sen. John Cooper's bid to retain his seat against Rep. Dan Sullivan in the March 3 primary. "But I think it will be very limited [in 2020] on primary races."

Hutchinson said his involvement in several high-profile primary races in 2016 "was something I don't want to repeat." In that GOP primary election, Hutchinson endorsed eight legislative candidates and six of them won.

In his remarks Tuesday at the Good Roads Foundation meeting, Hutchinson provided further details on a poll conducted by the Gilmore Strategy Group in early October. The governor first mentioned the poll on Nov. 15 when he helped the "Vote for Roads. Vote for Issue 1" committee kick off its campaign.

Hutchinson said that 62% of 800 likely voters polled said they're either going to vote for Issue 1 or are leaning or likely to vote for it, and the poll has a margin of error of 3.46%.

"Even among Republican voters, it is 61%. Those are good numbers for it," he said.

Afterward, J.R. Davis, a senior strategist for the Gilmore Strategy Group, said 70% of the Democrats polled indicated they are going to vote for Issue 1 or are leaning toward doing so, and 60% of independents felt the same way.

Hutchinson said the poll showed that 68.6% of the people polled are more likely to vote for Issue 1 "if they are assured that it was going to be spent and invested in all four corners of the state."

Hutchinson said it's important that "the public must have the buy-in for" Issue 1.

"I am delighted that the [highway] commissioners, the [Transportation] Department will be holding 12 public hearings across the state between January and April of this year," he said. The town hall meetings will begin in Monticello on Jan. 21 and end April 2 in El Dorado, according to the department.

"This is critical because whenever the public wants to see how this money is going to be spent," Hutchinson said "They want to make sure that the divvying up and the allocation of those funds was not done simply behind a closed door, but that they had input into it, that they were able to express their views on it, they were able to see it on a map and to comment on it and help develop it and shape it."