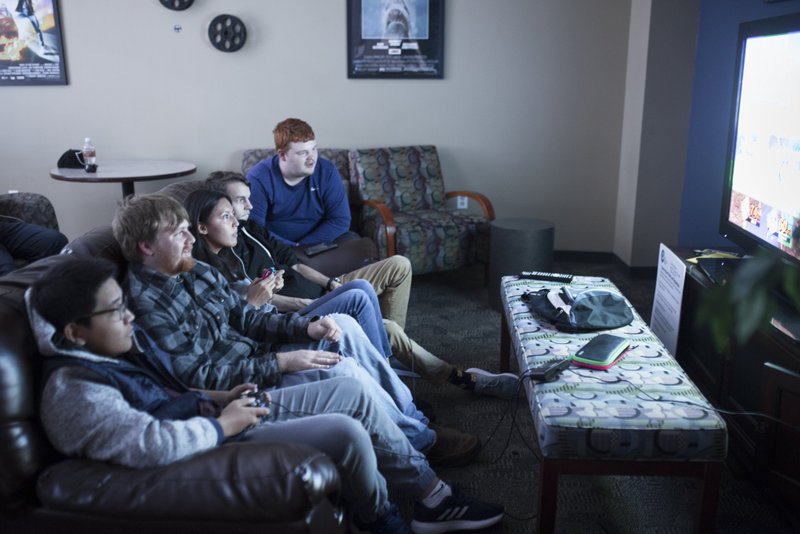 Students Phat Le of Springdale (from left), Miles Casey of Siloam Springs, Jakelin Calleros of Lowell, Steven Beard of Bella Vista and Brennan Kitchens of Centerton play Super Smash Bros. in the Northwest Arkansas Community College game room in Bentonville. The college is studying the possibility of adding dormitories to its campus.

The college hired Vogt Strategic Insights, a firm based in Columbus, Ohio, to do a market feasibility study on the matter for $10,300. The study will consider potential benefits and drawbacks of dormitories, and demand for student housing, said President Evelyn Jorgenson.

Trustees have discussed the issue since last year, and the college is gathering information, said Joe Spivey, board chairman.

"One of the things our community college has always done is plan out into the future," Spivey said. "It's good that we're at least looking at it and studying it so we're informed."

The Vogt study will consider area demographics and characteristics, planned and proposed projects affecting the college's property, the strength of the local apartment market and results of a student survey administered by the college.

The firm will offer conclusions that will include the number of residential units that could be supported at the college, recommendations for unit and project amenities, and what rent to charge to make student housing competitive with the local market, according to the contract between the college and the firm.

Vogt started the project earlier this month and expects to deliver its findings in mid-January, said Nathan Young, a partner with the firm.

The firm is still working with the college on the questions asked as part of the survey, which may not be administered until after the holidays. The goal is to get a sense of what kinds of amenities students prefer and how far they commute to and from the school, Young said.

"It will be pretty basic," he said.

That prompted Northwest Arkansas Community College officials to look at residential facilities at other community colleges. They visited Crowder College in Neosho, Mo., and two other small community colleges in Kansas last year.

In October, they made another trip to see what residential life is like at schools closer in size to Northwest Arkansas Community College -- North Central Texas College in Gainesville, Texas; Rose State College in Midwest City, Okla.; and Northern Oklahoma College in Tonkawa, Okla.

The enrollments of those three schools range between 4,200 and 10,500. Northwest Arkansas Community College reported an enrollment of 8,649 students this semester, a 4.1% increase from 8,308 the previous year.

"Overall, it was a great learning experience," said Rachel Harris, one of two trustees and four administrators who went on the October trip.

Northern Oklahoma, for example, had 453 students -- 11% of its overall enrollment -- living in campus dorms last fall semester, according to the college's fact book.

Rose State College, a commuter school, enrolls students from most of the 77 counties in Oklahoma, something the college attributes largely to the fact that it has on-campus housing for up to 166 students, said Tamara Pratt, Rose's vice president of external affairs. The college is building another facility with 114 beds that's expected to open next fall.

Northwest Arkansas Community College has land available on the north side of campus for buildings.

Jorgenson said people looking to attend college may be attracted to a community college because it's generally cheaper than a four-year university, but they also may be looking for the kinds of amenities associated with the four-year school experience, such as housing and athletic events.

"We have to be aware of that as we look to the future and make sure we're providing what today's students and tomorrow's students are going to be expecting of higher education, and make sure we don't miss the ball and end up scrambling to catch up," she said.

Two of the state's two-year colleges are building residence halls -- National Park Community College in Hot Springs and the University of Arkansas Rich Mountain in Mena.

National Park, a school of about 2,500 students, did a study before deciding to build Dogwood Hall that's expected to open in the fall, said Melony Ritter, the college's director of marketing and public relations.

The $9 million, 50,000-square-foot hall will house 180 residents in 52 furnished apartments. The college is partnering with Servitas, a nationwide student housing development firm, to build and operate Dogwood Hall.

Survey results at National Park indicated that more than half of the 586 respondents were ages 17-24 and 86% of them would consider on-campus housing. One-fourth of all respondents commute more than 40 miles a day to attend the college, and 15% travel more than 60 miles, according to a college news release.

"Our students are asking for safe, affordable housing," Ritter said. "We felt like it was something we needed to address."

About 70 miles west of Hot Springs is the University of Arkansas Rich Mountain, the smallest two-year college in the state with 866 students this fall. The school announced plans early this year to build four condominium-style halls to accommodate 138 students, said LeAnn Dilbeck, a college spokeswoman.

The $7 million buildings are expected to be completed by August. This fall, the college began housing 53 students in mobile homes on campus, Dilbeck said.

The school's main campus is in Mena, the largest town in Polk County with about 6,000 people. Rental housing in the area within the budget of a college student is limited, which is why the college was motivated to build its own, Dilbeck said.

The college saw enrollment increase 6% this fall compared with last fall, something Dilbeck attributes in part to the on-campus housing.

In addition, the university system last spring announced a new scholarship program that allows Rich Mountain associate-degree graduates to transfer to the University of Arkansas and continue paying the tuition they were paying at the community college. 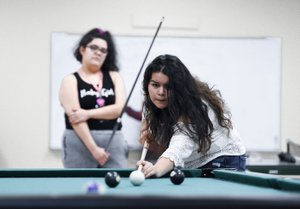 Photo by Charlie Kaijo
Diana Duran of Springdale shoots pool Nov. 21 at the Northwest Arkansas Community College’s game room in Bentonville. The college continues to study adding dormitories to its campus. The college is investing about $10,000 in a study by Vogt Strategic Insights. 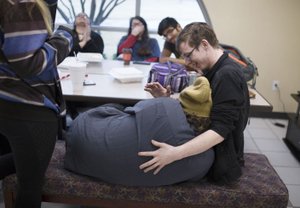 Photo by Charlie Kaijo
Greg Higginbotham (center) of Rogers leans Nov. 21 on Gregg Bartleson (right) of Bentonville as they entertain friends during lunch at Northwest Arkansas Community College’s game room in Bentonville. The college continues to study adding dormitories to its campus. The college is investing about $10,000 in a study by Vogt Strategic Insights.