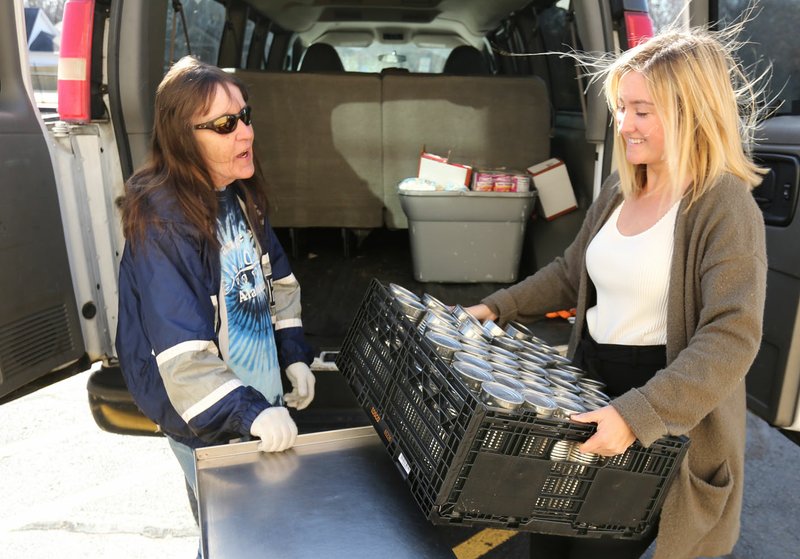 NWA Arkansas Democrat-Gazette/DAVID GOTTSCHALK Dimmie Tull (left), kitchen manager with The Salvation Army of Northwest Arkansas, and Blair Cook, public relations and volunteer coordinator with The Salvation Army of Northwest Arkansas, unload food for the Thanksgiving meal Wednesday at the Genesis Church in Fayetteville. The traditional holiday meal will be served from 11 a.m. to 2 p.m. today at the church at 205 Martin Luther King Jr. Boulevard .

The nonprofit group Serve NWA hopes to have its New Beginnings transitional housing project built and operational by next winter. A separate project to expand the Salvation Army's shelter will have to wait until next year to open its doors, although a date hasn't been set.

Organizers behind both projects originally intended to be open before cold set in this year. New Beginnings encountered challenges such as getting the city to waive fees and conforming design of the micro shelters to city code. Salvation Army struggled to find a way to do work without displacing the people at its shelter.

Both projects are still happening. It's just a matter of time, organizers say.

"We're just not going to let another winter pass," said Kevin Fitzpatrick, Serve NWA board vice president and director of the University of Arkansas Community and Family Institute. "We've got to get it done."

Joey Cox, 42, said the projects are going to help people. The last time Cox had his own place was in 2013. Since then, he's bounced around living facilities in Russellville, Clarksville, Little Rock, Bentonville and Fort Smith, he said.

Cox was born and raised in Gravette and graduated in 1997 from Fayetteville High School. He's worked some odd jobs, mainly in construction and waste management. He fell about 375 feet while doing a construction job in 2006. Scaffolding caught him on the way down, but he severely injured his back. Cox walks with a brace and has pins and screws in his back.

Cox will be able to move into an apartment at 7 Hills' Walker Community in a few weeks, he said. In the meantime, he's living outside.

He's unable to stay at the Salvation Army because of a misunderstanding. He said he's not mad at the organization. Cox has stayed at the shelter, and described cramped conditions. The shelter reaches capacity when it's especially cold outside, and people tend to get easily agitated being in such close proximity to one another, he said.

"You can't breathe when you're walking by somebody," Cox said. "If you let out the slightest little bit of air, everybody's up."

Cox was glad to hear of the shelter expansion and the New Beginnings project. At the very least, those two projects will give people some much-needed space, he said. It should help relieve tension, plus the line for meals at Salvation Army should shrink with an expanded dining area, Cox said.

Hopefully, Cox won't be needing to use those facilities, he said. He has a plan to get a Section 8 voucher soon after moving into temporary housing at the Walker Community. He wants to get a job at McDonald's and make a home in the city, Cox said.

"I've just got to hold on until my apartment becomes available," he said. 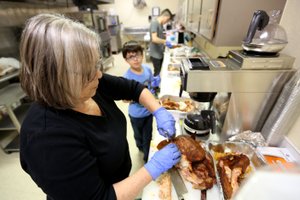 NWA Arkansas Democrat-Gazette/DAVID GOTTSCHALK Volunteers Diane Gaynor (from left), her grandson Caden Herrera, 9, and Jare Garcia slice smoked turkeys Wednesday in the kitchen of Genesis Church in Fayetteville. The traditional holiday meal will be served from 11 a.m. to 2 p.m. today at the church at 205 Martin Luther King Jr. Boulevard.

The New Beginnings project will start with 20 micro shelters on 5 acres Serve NWA owns south of 19th Street and School Avenue, next door to 7 Hills Homeless Center. The site will have enough room to build another 10 shelters in a later phase, Fitzpatrick said.

Also included is a 3,000-square-foot service building with showers, a kitchen and offices with caseworkers to accommodate needs of the homeless.

"You go in with your best guesstimate, and things happen," he said. "What looked like a simple grading plan becomes way more complicated. What looked like an easy run for a sewer line became three times more expensive. All of those things."

The goal will cover the cost of construction and a year of personnel and programming, Fitzpatrick said.

Private donations are keeping the project going. Serve NWA also received a $27,500 grant from the Walmart Foundation to build a teaching kitchen at New Beginnings. No public money has gone into the project, Fitzpatrick said.

The city waived about $5,000 in fees. The City Council earlier this month changed city code to include homeless shelters on the list of projects where impact and building fees can be waived. Previously, only affordable housing projects could have the fees waived.

The majority of the exempted fees were impact fees, meaning fees a new project has to pay based on the calculated cost of police, fire and water service, said Garner Stoll, Development Services director. Building permit fees are a small amount in comparison, he said.

The council is set to waive a $500 development fee for New Beginnings during its Tuesday meeting.

Other changes prolonged the project. The original plan was to make A-frame shelters for each member of the community. City code requires at least 5-foot-tall walls on a structure, so now the design looks more like a small house, Fitzpatrick said. The path of a sewer line had to change because a nearby property owner didn't want it running through his property. The Arkansas Department of Health had to sign off on the design of a grease drain at the property. Every change required going back and forth between architects and engineers.

The fact no other project like it exists in Northwest Arkansas means there's no template to refer to for the more technical aspects, Fitzpatrick said.

"Every little bump turns into a big mountain," he said. "These are all things we certainly couldn't anticipate, and neither, frankly, could the architects or the city. This is all new."

The Planning Commission on Monday extended the permit for New Beginnings for another year because it was set to expire.

Fitzpatrick said he believes the project should kick up dirt early next year. It should take six to nine months to complete, he said.

The plan is to start enlisting clients for case management by late summer or fall, and be up and running by winter, Fitzpatrick said.

There's a chance work to expand Salvation Army's shelter could start by the end of this year or early next year, but either way, doors won't open until next year, Capt. Josh Robinett said.

The Salvation Army has a shelter opening nightly, a dining hall and service and office building just south of 15th Street east of South School Avenue. The thrift store is a separate operation on the west side of School Avenue.

The plan is to more than double the shelter's capacity from 26 to 54 beds. The army's dining space also will double, enabling it to host its annual holiday meals on-site, rather than at Genesis Church, as it has done recently, Robinett said. There also will be a computer lab for people to search for jobs or housing or communicate with family, he said.

Two family-sized apartments also will be built at the Salvation Army property. The addition of the apartments will mean more privacy and better space for children, Robinett said. The idea is for families to have a place to stay while working with case managers to develop a housing plan and eventually move out, he said.

Development of the apartments goes in line with the army's revised operational model to go from serving people in a short-term, emergency capacity to a more housing-focused method, Robinett said.

"It didn't provide the time frame that was needed to get people housed," said. "By the time their exit was coming for the shelter, they didn't have a place to go. That model just wasn't working."

The organization faced hurdles trying to figure out how to continue serving people with extensive renovation work happening at the same time, Robinett said. The army provided more than 31,000 nights of shelter last year among all the people served and has probably already surpassed that number this year, he said.

"We're well beyond committed. It's going to happen," Robinett said. "It's just a matter of timing."

The project has an estimated cost of $400,000. The majority of the organization's money comes from donations, with about $50,000 coming from the federal Community Development Block Grant program.

Stoll said the shelter expansion likely will be exempt from the city's fees.

Several organizations, including those listed below, are helping people in the region who are experiencing homelessness. They need volunteers and donations.

• Monetary donations are accepted online. The organization asks for cots, food, plates and cutlery, and cleaning and personal hygiene products.

• Monetary donations are accepted online. Winter items such as coats, jackets, gloves, hats and long underwear can be dropped off at the center.