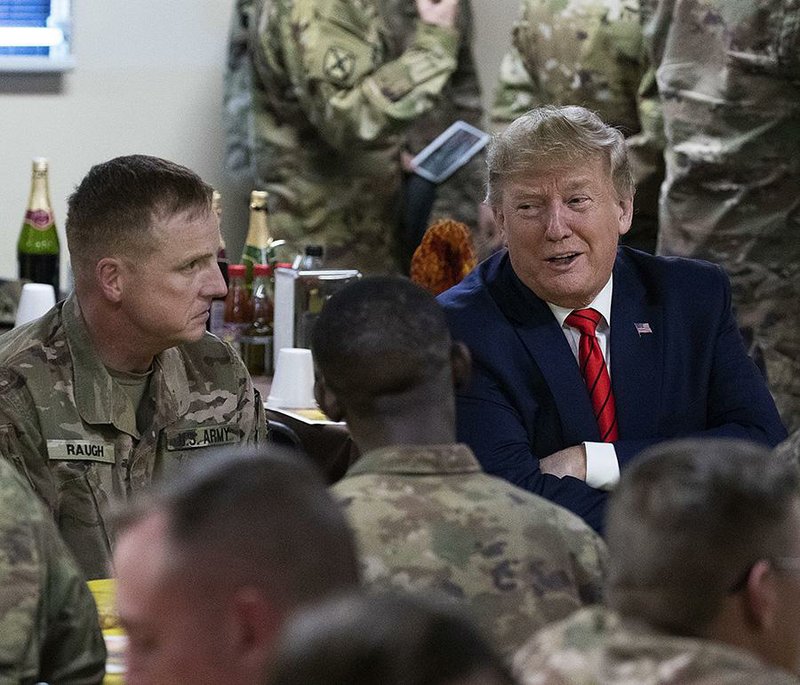 President Donald Trump talks with members of the military Thursday during a surprise Thanksgiving Day visit at Bagram Airfield in Afghanistan.

BAGRAM AIRFIELD, Afghanistan -- President Donald Trump made a surprise Thanksgiving visit to Afghanistan to meet with the country's president and U.S. troops, saying that peace talks with the Taliban have resumed in a push for a cease-fire and to reduce U.S. deployment in the region.

The president landed at Bagram Airfield about 8:30 p.m. Afghan time Thursday and spent 3½ hours on the ground. He greeted U.S. soldiers over a turkey dinner before meeting with Afghanistan President Ashraf Ghani at the airfield's Air Force headquarters.

Reporters were under strict instructions to keep the trip a secret to ensure the president's safety in the country.

Trump appeared in good spirits as he was escorted around the base by heavily armed soldiers, as the smell of burning fuel and garbage wafted through the chilly air. Unlike last year's post-Christmas visit to Iraq, first lady Melania Trump did not make the trip.

Trump summoned reporters for part of his meeting with Ghani and said talks with the Taliban are ongoing. The U.S. wants the Taliban to agree to a cease-fire and will continue to reduce its troop commitment to the region, Trump said.

The Taliban made no official comment immediately after the late-night visit, and Ghani said little afterward about any peace talks. "Both sides underscored that if the Taliban are sincere in their commitment to reaching a peace deal, they must accept a ceasefire," Ghani wrote on Twitter. "We also emphasized that for any peace to last, terrorist safe havens outside Afghanistan must be dismantled."

[Video not showing up above? Click here to watch » https://www.youtube.com/watch?v=K9YPiWzKEOI]

But while the Afghan government has long demanded that the Taliban agree to a cease-fire, no evidence has emerged that the group was willing to grant one. Instead, it has said it would discuss the possibility in negotiations with Afghanistan's political leaders over the future of the country once the Americans agree to leave.

Trump ran his 2016 campaign promising to end the nation's "endless wars" and has been pushing to withdraw troops from Afghanistan and in the Middle East despite protests from top U.S. officials, Trump's Republican allies in Washington and many U.S. allies abroad. For months now, he has described American forces as "policemen" and argued that other countries' wars should be theirs to wage.

Tens of thousands of Afghan civilians and more than 2,400 American service members have been killed since the war began 18 years ago.

Last week, Trump flew to Dover Air Force Base in Delaware to oversee the transfer of the remains of two Army officers killed when their helicopter crashed as they provided security for troops on the ground in Logar province in eastern Afghanistan. The Taliban still controls or holds sway over about half of the country, staging near daily attacks targeting Afghan forces and government officials.

Trump confirmed that he'd like to reduce troop levels to about 8,600 in Afghanistan from 12,000 now, but would like to go lower without affecting operational duties. "We can go much further than that, but we'll have it all covered," Trump said.

Trump and Ghani said it was an honor to meet. Trump spent about 45 minutes in the building where they met, with journalists in the room for only a portion of it. In brief remarks to reporters during the bilateral session, Ghani noted that U.S. combat casualties have fallen under Trump's presidency. Trump took office after the NATO mission in Afghanistan shifted to a training and advisory role.

Ghani thanked Trump for his leadership and called for a deal that won't give too much power to the Taliban, saying Trump should not put "limits on the type of peace that will ensure the gains of the past year, and will ensure your security and our freedom."

"President Trump, people talked a lot about bin Laden, but what you did to eliminate al-Baghdadi, who was an organizer and not a talker, is a much great accomplishment," said Ghani, in remarks to U.S. troops before Trump's departure.

Trump and Ghani then attended a rally-style event at a nearby hangar for U.S. troops, and Trump entered to the same song, "Proud to Be an American," he uses at campaign rallies. He then invited Ghani to speak to the U.S. troops, and the Afghan leader delivered an impassioned defense of the U.S. mission.

"Please thank your families for agreeing to miss you on this special occasion at home and for being here defending United States security and our freedom. Together, we will succeed," Ghani told the soldiers. "We will never permit the repetition of 9/11 again. God bless you, God bless the president."

At the rally, Trump reiterated that they're working for a peace deal in Afghanistan. "Rest assured that my administration will always be committed to annihilating terrorists wherever they appear," he told troops there, adding that he looked forward to the day "when we can bring each and every one of you home and safe to your family, and that day is coming and coming very soon."

Trump's remarks hit many of the same themes as his campaign events, including discussing highs in the stock market, the recent death of al-Baghdadi and the role that a U.S. military dog, Conan, played in that mission. He recalled serving turkey earlier to troops and missing out on his own meal.

"I had a bit of mashed potatoes, and I never got to my turkey," Trump told soldiers at the rally, saying he instead went to take photos with service members. "I should have started with that, and not the mashed potatoes. I made a mistake."

Afghanistan is America's longest-running war. He's said he wants to bring troops home even from regions where U.S. efforts are aimed at quelling terrorist activity. "We're not fighting, we're policing in Afghanistan," Trump said in October. On Thursday, he argued that technological advances would allow the U.S. to do more in Afghanistan with fewer soldiers.

During the Ghani bilateral meeting, Gen. Mark Milley, chairman of the Joint Chiefs of Staff, confirmed that talks with the Taliban are ongoing. "Hopefully those will be successful, and hopefully will then lead to an Afghan-to-Afghan dialogue in the not too distant future," Milley said.

Trump didn't indicate how close they are to any kind of peace deal. Earlier this fall, Trump abruptly scrapped a secret peace summit with Afghan and Taliban leaders at Camp David a day before it was scheduled to start, and, in doing so, was blamed for scuttling a potential pact.

White House press secretary Stephanie Grisham downplayed the trip's significance in any peace talks. "It's truly about Thanksgiving and supporting the troops," she said.

Trump was greeted at Bagram, the largest U.S. military base in Afghanistan, by Milley. He then headed straight to a dining hall, where he mingled with U.S. troops under Thanksgiving-themed decorations, streamers and paper lanterns, as TVs played the New York Macy's Thanksgiving Day Parade and other U.S. programming.

The White House took pains to keep the trip a secret after Trump's cover was blown last year when Air Force One was spotted en route to Iraq by an amateur British flight watcher.

Cellphones and other transmitting devices were confiscated for most of the trip from everyone traveling aboard Air Force One. And Thanksgiving-themed tweets were teed up to publish ahead of time from Trump's account to prevent suspicions arising about the president's silence.

A small group of reporters was told to meet Wednesday night on the top floor of a parking garage and was transported in black vans to Andrews Air Force Base. Meanwhile, the president was secretly flying back from Florida, where reporters had been told he'd be spending Thanksgiving at his Mar-a-Lago club.

The plane he'd flown to Florida -- the modified 747 painted in the iconic white and blue of Air Force One -- remained parked on the tarmac at West Palm Beach Airport to avoid revealing the president's movement.

About 9:45 p.m. Wednesday, the president boarded a nearly identical plane concealed in a hangar at Andrews Air Force Base, taking off and landing under the cover of darkness, with cabin lights dimmed and window shutters drawn.

Grisham said plans for the visit had been in the works for weeks.

"It's a dangerous area, and he wants to support the troops," Grisham told reporters before Trump landed. "He and Mrs. Trump recognize that there's a lot of people who are away from their families during the holidays, and we thought it'd be a nice surprise."

The president told the troops that he was honored to spend part of his holiday with them.

"There is nowhere I'd rather celebrate this Thanksgiving than right here with the toughest, strongest, best and bravest warriors on the face of the Earth," Trump said.

Information for this article was contributed by Josh Wingrove and Ryan Beene of Bloomberg News; by Jill Colvin of The Associated Press; and by Michael Crowley of The New York Times. 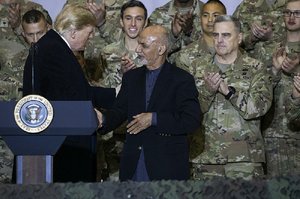