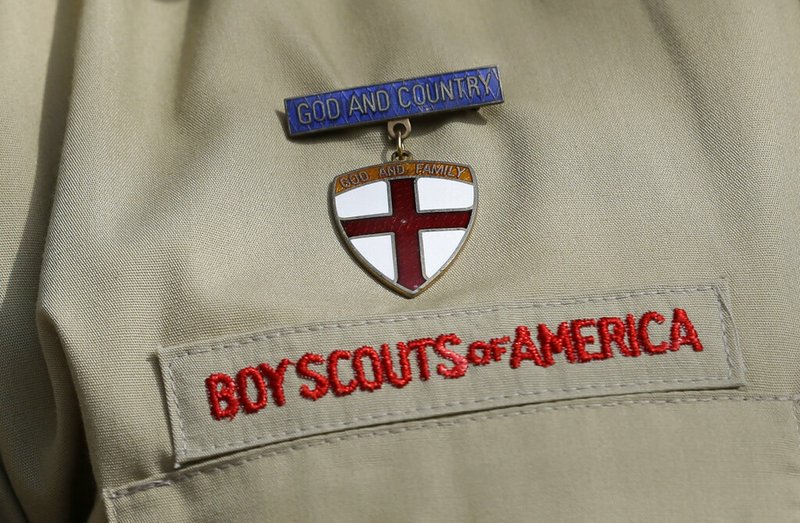 FILE - This Feb. 4, 2013 file photo shows a close up detail of a Boy Scout uniform worn during a news conference in front of the Boy Scouts of America headquarters in Irving, Texas. (AP Photo/Tony Gutierrez, File)

A new abuse lawsuit filed against the Boy Scouts says the largest youth organization in the United States purposely reassigned a scout leader who was a known sexual predator, resulting in the molestation of two prepubescent boys on multiple occasions during outings in Hot Springs, according to court documents.

The lawsuit, filed Wednesday in U.S. District Court in Little Rock, also accuses the Boy Scouts of actively concealing its history of "negligence and fraud."

The plaintiffs in the case are Travis Barkley of Mississippi and Jeffrey Burfeind of Florida, who claimed that scout leader Sam Otts sexually abused them at various times in 1979 and 1980. Barkley was 10 to 11 years old when he was abused and Burfeind was 9 to 10 years old, according to the lawsuit.

Barkley and Burfeind are represented by Little Rock-area attorney Joshua Gillispie, who also represents four other defendants in circuit court -- three in Pulaski County and one in Washington County.

[DOCUMENT: Complaint against the Boy Scouts of America » arkansasonline.com/1130complaint]

All six were molested by Otts, who was a scout leader for Boy Scout Troop 16 and its affiliated Webelos Unit 13, Gillispie said by telephone Friday.

"They're not alleging that their memories were repressed," Gillispie said. "What they've not known until recently is that the Boy Scouts knew all along that Otts was a pedophile and had abused boys prior to them allowing him to become a scout leader here in Arkansas."

In 1977, Otts was reported to the Boy Scouts for sexually abusing boys as a scout leader in Mt. Berry, Ga., court records show. The Boy Scouts determined at the time that Otts should be considered "ineligible" to volunteer with boys, but it still reinstated him two years later after he moved to Arkansas.

"They didn't tell anybody," Gillispie said. "They didn't warn anybody. They held him out to the community as a safe person."

Moreover, the Boy Scouts had documented the 1977 incident, kept it in a file and didn't release it until a court ordered the organization to do so 35 years later, according to the lawsuit.

Otts is not named as a defendant in the lawsuit. It isn't known whether he is still alive. If so, he would be 90 years old.

One of the suits filed in Pulaski County was dismissed in December 2018 after the judge in the case said it was filed too late. Gillispie filed a motion of reconsideration in the case, which has kept it alive, he said.

In 2012, an Oregon court ordered the release of 1,200 pages of documents detailing how the Boy Scouts had handled allegations of sexual abuse within its ranks. The documents are commonly referred to as the "perversion files" and go back as far as 1944.

The plaintiff in the aforementioned Pulaski County lawsuit, William Stevens, was the first of Gillispie's clients to discover the details about Otts through the "perversion files." He did so while doing a Google search in November 2016.

Gillispie filed the suit in June 2018, which he argued was within the three-year statute of limitations. The Boy Scouts of America argued that the statute-of-limitations clock started from the moment the "perversion files" were disclosed, not from the moment when Stevens learned about them.

Gillispie said news of those files was not widely circulated by the media. It is also unrealistic to assume that his clients should have been on top of the breaking news about Otts and the perceived cover-up by the Boy Scouts, Gillispie said.

"In the eyes of the Boy Scouts, they should have been scouring the internet every day for any mention of the person who sexually abused them, which is beyond ridiculous," he said.

Stuart Miller, an attorney representing the Boy Scouts, argued last year in Pulaski County Circuit Court that Stevens could have easily found out sooner than he did.

"With reasonable diligence, he should have known," Miller argued. "This stuff was out everywhere."

Gillispie pointed out that the Boy Scouts never disputed the abuse, nor its concealment of the abuse.

Records show the Boy Scouts did not notify law enforcement about Otts in either Georgia or Arkansas. Of the six clients Gillispie represents, only one of them told his parents about the abuse. Gillispie said those parents decided not to report it to police because they didn't want to put their son through the trauma of testifying in a courtroom, Gillispie said.

There was also the assumption on the part of those parents that the Boy Scouts would do the right thing, he said.

In December, the Boy Scouts notified the media it was considering filing for Chapter 11 bankruptcy protection because of mounting lawsuits, but no such announcement has been made.