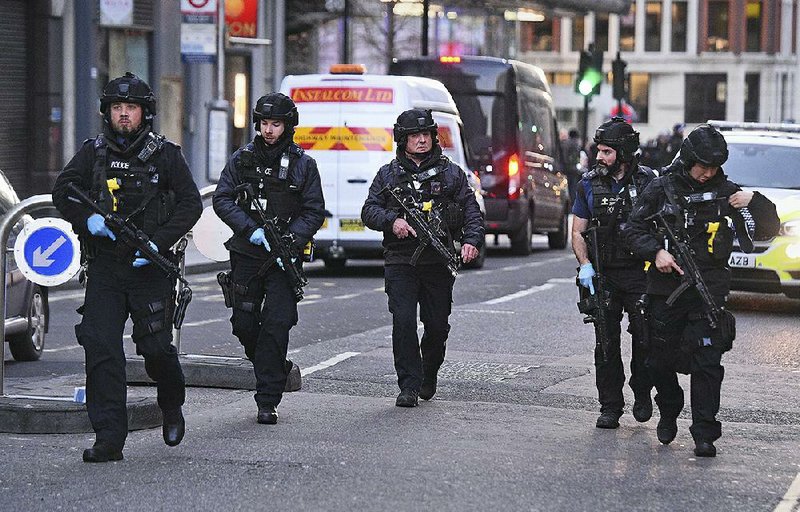 Police patrol Cannon Street in London near the scene where an attacker with a knife stabbed people on London Bridge and then was fatally shot by officers. More photos are available at arkansasonline.com/1130london

LONDON -- Two people were fatally stabbed, and the knife-wielding assailant shot dead by police, in a midafternoon attack Friday on the busy London Bridge.

"It has been declared a terrorist incident," said Neil Basu, assistant commissioner of the Metropolitan Police. "I must stress, however, that we retain an open mind as to any motive."

Police cited the fake explosive vest the attacker was wearing and the fact that the assailant had previously been convicted of a terrorism-related offense.

Hours later and about 200 miles to the east, another assailant stabbed three people in a busy shopping district in the Netherlands. Police were still searching for that attacker as of early today, authorities said.

[Video not showing up above? Click here to watch » https://www.youtube.com/watch?v=anoJDBKilO4]

Early today, police identified the assailant in the London attack as Usman Khan, 28, and said that no one else was being sought.

Police said Khan was convicted in 2012 of terrorism offenses and released in December 2018 "on license," which means he had to meet certain conditions or face recall to prison. Several British media outlets, including The Times in London and ITV, reported that he was wearing an electronic ankle bracelet.

The Guardian also said he was known to authorities because of his previous conviction.

Police said the incident started at Fishmongers' Hall, which stands beside the north entrance to London Bridge. According to The Times, the attacker was a guest at a conference hosted by Learning Together, a Cambridge University-backed program that works to educate prisoners. The event was focused on prisoner rehabilitation.

Cambridge Vice Chancellor Stephen Toope said he was "devastated to learn that today's hateful attack on London Bridge may have been targeted at staff, students and alumni attending an event organized by the University of Cambridge's Institute of Criminology."

The attack started inside the hall. A woman who said she was in the hall posted on Twitter that after the attack began, another man grabbed a 5-foot-long narwhal tusk from the wall and used it to confront the attacker.

The attacker then escaped to the bridge. As onlookers were trying to subdue the assailant, bystanders captured images of a man standing with a long white pole. The woman in the hall, Amy Coop, said that was the narwhal tusk.

Video captured by bystanders also showed another man, in a suit and tie, appearing to grab a knife and retreat as police approached. It has been widely reported that the man who picked up the knife was involved in trying to end the attack.

As the crowd held the assailant to the ground, at least three police officers responded with their guns drawn. Karen Bosch, who was on a bus crossing the bridge, said the attacker "pulled his coat back which showed that he had some sort of vest underneath, whether it's a stab vest, or some sort of explosive vest. The police then really quickly moved backwards, away."

Officials later described the vest as a "hoax explosive device."

Video from the scene shows police pulling the other people away from the man on the ground, and then an officer appeared to fire at least one shot, hitting the man and prompting screams from bystanders. The man died at the scene, police said.

A man and a woman were killed by the attacker, and three other people were injured and remain hospitalized.

Police vehicles blocked both sides of the roadway on London Bridge, which is one of the city's busiest arteries and a popular crossing for tourists and other pedestrians.

Noa Bodner, who was stuck in a restaurant near London Bridge, told BBC News that those sheltering inside had been told to keep away from the windows.

"There was a rush of people coming in, and everybody basically dived under the tables," she said.

Cressida Dick, commissioner of the Metropolitan Police, at a briefing at Scotland Yard said late Friday that police were working "full tilt to understand exactly what has happened." Detectives would also work "around the clock to identify those who lost their lives," she said, calling it "a very fast-moving, dynamic investigation."

London Mayor Sadiq Khan hailed the bravery of ordinary people who responded to the London attack.

"What's remarkable about the images we have seen is the breathtaking heroism of members of the public who literally ran towards danger, not knowing what confronted them," he said.

Khan noted that people would not have known at the time that the device worn by the attacker was fake.

"They really are the best of us, another example of the bravery and heroism of ordinary Londoners," Khan said.

Prime Minister Boris Johnson said late Friday that he had "long argued" that it was a "mistake to allow serious and violent criminals to come out of prison early."

"It is very important that we get out of that habit and that we enforce the appropriate sentences for dangerous criminals, especially for terrorists, that I think the public will want to see," he said.

Johnson said Britain would "never be cowed or divided or intimidated by this sort of attack, and our British values will prevail."

Jeremy Corbyn, Labor Party leader and Johnson's challenger in December elections, said earlier: "Shocking reports from London Bridge. My thoughts are with those caught up in the incident."

Both Johnson and Corbyn said they would briefly suspend campaigning. Britain is in the middle of a general election, and voters go to the polls in two weeks.

The attacker's history will raise difficult questions for Britain's government and security services.

President Donald Trump, who is headed to London next week for a meeting of NATO leaders, was briefed on the attack and was "monitoring the situation," the White House said in a statement.

"The United States strongly condemns all horrific acts of violence on innocent people, and we pledge our full support to our ally, the United Kingdom," the statement said.

Dutch police said the three people wounded in the separate stabbing attack in The Hague were all minors and were all released from the hospital late Friday.

The attack took place on a crowded shopping street about 12:45 p.m. Central time -- evening in the Netherlands. Police described the suspect as a man in a jogging suit between 45 and 50 years old. A Dutch police spokeswoman said it was too early to establish a motive for the attack in The Hague, and whether there was any connection to the attack in London.

The stabbing happened in an area teeming with shoppers. Supermarket chains and luxury shops were lit up with Christmas decorations.

Police sealed off a wide perimeter behind which onlookers were kept at bay.

Information for this article was contributed by William Booth and Karla Adam of The Washington Post; by Mark Landler and Megan Specia of The New York Times; and by Jill Lawless, Danica Kirka, Mike Corder and Raf Casert of The Associated Press.