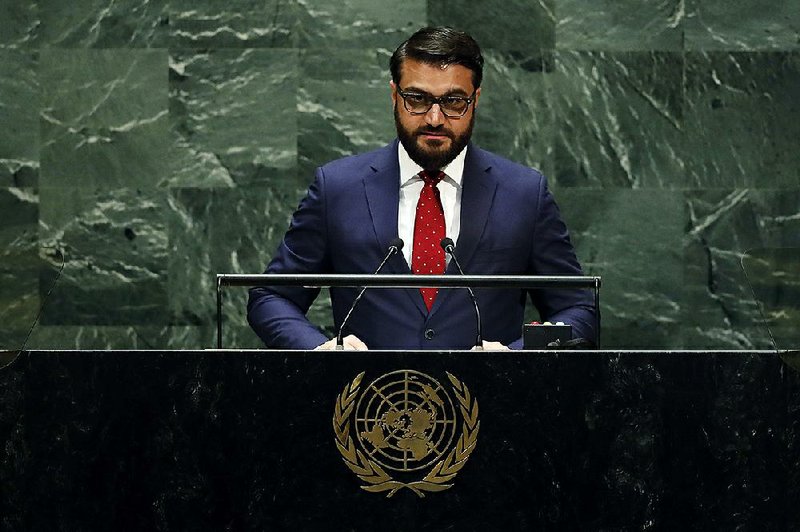 UNITED NATIONS -- As Afghans await the results of a presidential election roiled by Taliban threats, the government used its platform at the U.N. General Assembly on Monday to tell the insurgents: "Join us in peace, or we will continue to fight."

Afghanistan was not the only country sending a message on Monday. North Korea had one for the United States, saying it was up to Washington whether now-stalled nuclear negotiations "become a window of opportunity or an occasion that will hasten the crisis."

Monday morning's speeches came as this year's U.N. gathering of world leaders was beginning to wind down.

Afghan National Security Adviser Hamdullah Mohib spoke two days after Afghans voted in a presidential election in which hundreds of polling centers weren't opened because the country couldn't secure them against the Taliban.

The militants, who formerly ruled much of Afghanistan until they were ousted by a U.S.-led invasion in late 2001, now control or hold sway over roughly half the country and warned voters not to go to the polls.

[Video not showing up above? Click here to watch » https://www.youtube.com/watch?v=Jp54Ridm38A]

Results of the elections aren't due for weeks.

Mohib trumpeted the democratic commitment of Afghans who voted despite the threats. Some had fingers cut off by the Taliban during prior elections, he noted.

In a country where a new generation of leaders has grown up in wartime, "the opportunities afforded to us through the gains of the past 20 years have allowed us to change hope into something much more powerful -- belief," Mohib said.

"We believe in our abilities to bring about the peace we have hoped for all our lives."

The path is far from clear. U.S.-Taliban peace talks collapsed last month as a deal seemed imminent to end America's longest war. It began in 2001 as a U.S. effort to dislodge Afghanistan's then-ruling Taliban for harboring Osama bin Laden, the al-Qaida leader and mastermind of the Sept. 11, 2001, terror attacks.

The Afghan government had been sidelined in the talks; the Taliban refused to talk directly with an administration that the insurgents see as a U.S. puppet.

For North Korea, two summits with the U.S. haven't yielded a definitive plan for ending the North's nuclear program and the sanctions imposed because of it.

Negotiations have apparently been frozen since a summit between U.S. President Donald Trump and North Korean leader Kim Jong Un broke down in February, though the two met in June at the Korean border.

"The situation on the Korean peninsula has not come out of the vicious cycle of increased tension, which is entirely attributable to the political and military provocations perpetrated by the U.S.," North Korean Ambassador Kim Song said.

North Korea complains that the U.S. has boosted sanctions and resumed U.S.-South Korean military drills that Pyongyang has long decried.

At the same time, the North has continued conducting banned weapons tests.

Trump said last week that another summit meeting with Kim "could happen soon," but he didn't elaborate.