ASU loses another starter on defense 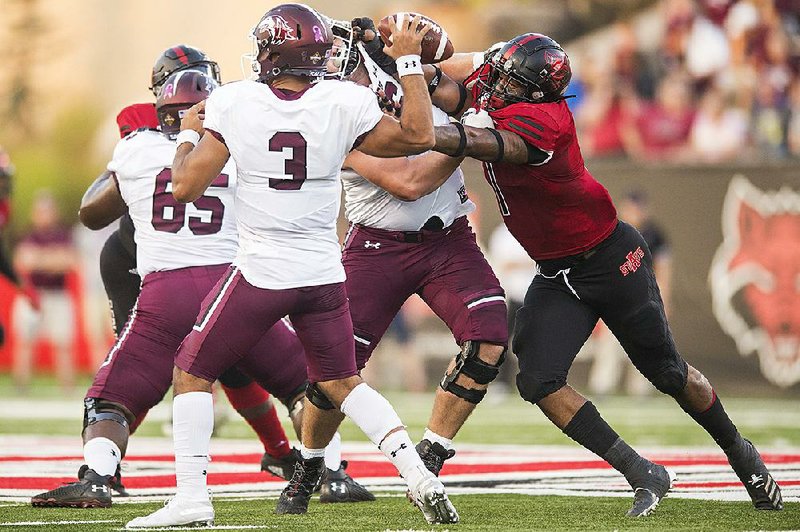 JONESBORO -- Another week means another Red Wolves player is out for the year with an injury.

Arkansas State University Coach Blake Anderson announced Monday that junior nose tackle Forrest Merrill is done for the season with a torn bicep. Merrill, who is second on the team in sacks with 3.5 and second in tackles for loss with 4.5, will have surgery this week.

"That's huge. I mean he's, to me, the best interior defensive lineman definitely in the league, if not in the country, at what he does," Anderson said. "[Troy Coach] Chip [Lindsey] asked me about [him] before the game. Every head coach has asked me, 'Where'd y'all find 92?' The guy's disruptive."

With Merrill out, ASU -- which travels to Atlanta to face Georgia State (2-2, 0-1 Sun Belt) on Saturday afternoon -- has lost four players -- including junior starting quarterback Logan Bonner -- to season-ending injuries within the past two weeks.

Other health issues include running back Ryan Graham being done for the year, senior wide receiver Dahu Green and sophomore running back Marcel Murray still battling injuries, and freshman running back Isaiah Azubuike suffering a hip pointer Saturday. ASU (3-2, 1-0 Sun Belt) was relying on fifth-string running back and senior Jamal Jones for much of the 50-43 victory over Troy.

Anderson and defensive coordinator David Duggan said Monday they'll have to get creative with moving some players to create depth.

That's six starters on defense who are hurt.

"It's just where we're at ... but we got to find a way to win," Anderson said. "Our kids just have to be resilient. We felt like we did some things creatively on defense this past week to help us against Troy's offense. We're gonna have to do similar things against Georgia State and future opponents as well."

Duggan said he hasn't seen this amount of injuries to one of his defenses since 2013, when he returned to Southern Miss as the defensive coordinator and linebackers coach under coach Todd Monken, who is now the Cleveland Browns' offensive coordinator.

There, when guys went down, it hurt Duggan even more.

"I told Todd Monken if we lose any one of these five players, we'd be sucking pond water," Duggan said. "And don't you know it, I jinxed myself and we lost all five. So yes, I have been in that situation, and it's no fun.

"But fortunately here we have a little bit of depth at some of the positions where we've lost some players, so that's obviously helped us a little bit here."

So are the Red Wolves close to "sucking pond water?"

"Not yet," Duggan said with a grin. "I still got my head above water. I haven't started to suck the water yet."

The rash of injuries hasn't stopped ASU's defense from making some big plays.

Aside from the Georgia matchup, ASU has forced at least one turnover in every game. On Saturday against Troy, the Red Wolves had a 40-yard fumble return for a touchdown, forced a safety and had an interception.

"It's making the plays when you need to," Duggan said. "I was disappointed that we couldn't get off the field faster, but we made plays."

There are still plenty of issues. The Red Wolves rank last in the Sun Belt in total defense, giving up an average of 500 yards per game. ASU also has given up a league-worst 125 first-down conversions and is eighth is scoring defense, allowing 36 points per game.

But ASU is ranked second in the league in red-zone defense, allowing points on 74.1% of trips. In Anderson's previous five seasons, the Red Wolves allowed scores on 78.4% of trips.

Eight of the 20 red-zone scores ASU has allowed have been field goals. On Saturday, the Red Wolves forced Troy to kick field goals from 20, 22 and 22 yards.

It's a welcome sign for Anderson, who had been frustrated the last few seasons with how many touchdowns ASU was giving up. He said he made one thing clear to Duggan at the beginning of the year.

"I said, 'I do not care about yards. I do not care about any stat but making them kick the ball,' and that's what we're doing well," Anderson said. "And it's not pretty at times. We are struggling. We're without bodies, and we're throwing the kitchen sink at them ... and I know it's frustrated Dave. If Dave had any hair, he'd be losing it at a fast pace." 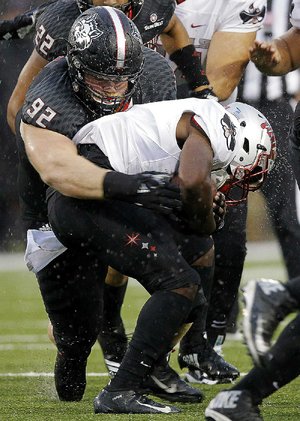 Photo by Thomas Metthe
Arkansas State’s Forrest Merrill tackles UNLV’s Lexington Thomas for a loss during a Sept. 22, 2018, game at Centennial Bank Stadium in Jonesboro. Merrill, a junior nose tackle, is done for the season with a torn bicep.