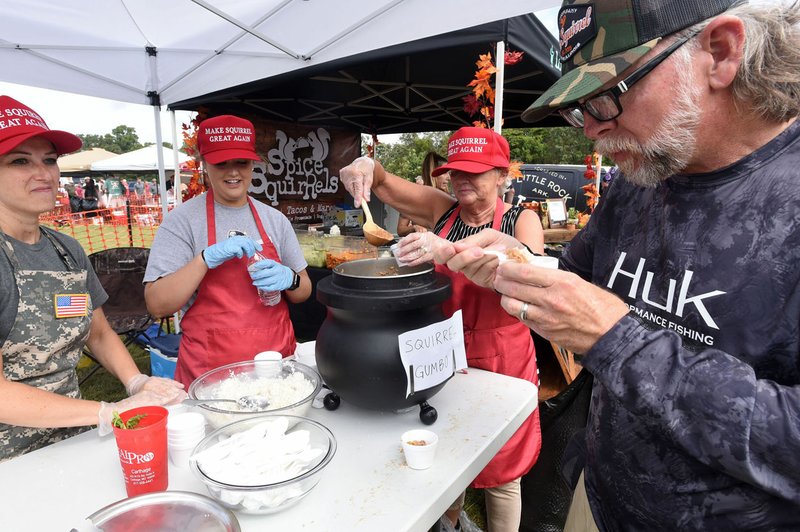 It's obvious why all ages on the branches of the family tree go nuts over the annual World Championship Squirrel Cook Off held each September west of Bentonville.

The wait staff will laugh if someone orders squirrel at any of the fine restaurants in Northwest Arkansas. The cook-off features fried squirrel, grilled squirrel and smoked squirrel for the tasting.

and their main dish

There’s ample opportunity for hunters to bag a mess of squirrels for dinner. Arkansas squirrel season opened May 15 and runs through Feb. 29. Daily limit is 12.

The world championship is free. This year's event, the eighth annual, was held Sept. 21.

Teams of squirrel chefs are happy to share squirrel treats they've whipped up, but the supply is naturally limited. Free squirrel gets scarfed up quickly as the crowd files in at the spacious Benton County Quail property near the Hiwasse community.

These gurus of the grill, such as team "Filet of Gray," aim to please, so several cooks whip up chicken dishes that use the same sauces, spices and vegetables as the squirrel dishes they prepare for the judges.

Some go out on a limb and offer free samples of deer jerky, elk summer sausage or roasted javelina hog. Sam Carrier, a cook from California, prepared the small Texas pig from start to finish right there at the cook-off.

Teams are proud of their catchy names like "Chicken of the Tree" and "Spice Squirrels." It's fun, but serious, too. This year, 22 teams chopped, sliced and sautéed hoping to bag the $1,000 first prize.

Each year, teams from right here at home, from distant states and the occasional foreign country sign up, said Joe Wilson, founder of the World Champion Squirrel Cook Off.

"I don't know where the Netherlands is, but I think you could get lost driving there," Wilson said of this year's Netherlands team.

Wilson, sporting his trademark cowboy hat, sunglasses and autumn camouflage sport coat, got a notion for the contest nine years ago.

One rule is that 80% of the meat in a main dish has to be squirrel, Wilson said. Pre-cooking squirrels isn't allowed. Judging is done behind closed doors.

David Evans of Owasso, Okla., a team "Chicken of the Tree" member, has been cooking and eating squirrel all his life. The team is a mixture of Arkies and Okies.

"My first recollection is growing up and hunting squirrels with my grandpa," he said. "We'd bring 'em back and clean 'em and my grandma would cook 'em up.

"And they're delicious," Evans testified. "A lot of youngsters have never had squirrel, and some of them get to try it here."

That includes Jackson Tasker, age 1, sitting in his comfy stroller. His dad, Jordan Tasker of Joplin, Mo., sampled a cup of squirrel gumbo and gave his son a taste.

"Where else can you go to eat squirrel? The whole idea is fun," he said. "It's unique. Everybody is real down to earth here."

J.P. Fairhead traveled from Jonesboro to whip up a most unusual dish -- squirrel eggs Benedict. There at his table he cooked a waffle and topped it with a grilled patty of squirrel meat while an egg poached in steaming hot water. It all got topped with a tasty cherry jalapeno sauce he fixes.

Print Headline: Treats from the tree