Gotta have F*R*I*E*N*D*S: 25 years after the sitcom debuted on NBC, it proves it can be more popular 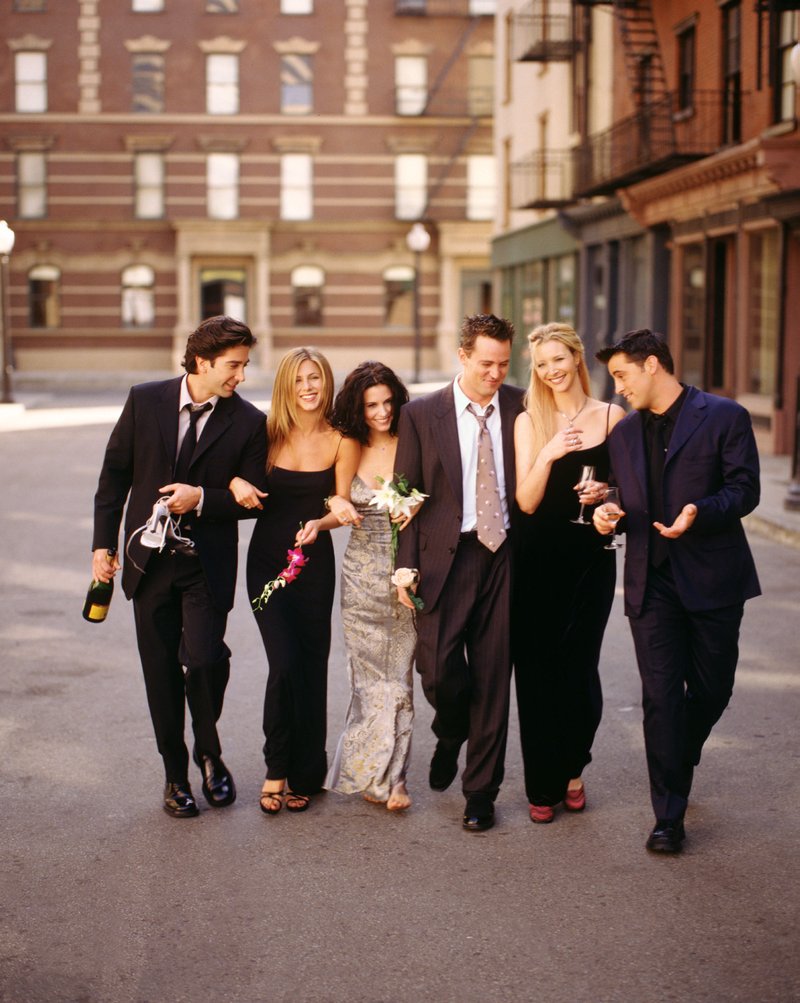 LOS ANGELES — Friends is getting old. Its fans have never been younger.

As the sitcom about six 20-somethings marks its 25th anniversary, it has spawned a devoted youthful viewership, especially among ’tween and teen girls who weren’t yet born when it went off the air in 2004.

In an era when everyone assumed they would move on to YouTube and Instagram video, young girls have embraced the series and its old-fashioned, studio-audience, sitcom format, bingeing its 10 seasons on Netflix through their tablets and phones, wearing T-shirts with the show’s logo and constantly quoting catch-phrases.

“It is old but you can’t tell that much when you’re watching,” said 15-year-old Sammy Joyce of Long Beach, Calif. “It’s too funny to care about how old it is.”

Some first hear about the show from Generation X parents who watched the initial NBC run, but the show has caught on mostly via word-of-mouth between friends.

“My friends all really liked it. They were all really into it and they would always be quoting it so I decided to give it a try,” said 15-year-old Adelaide Driver of Taos, N.M.. “I kind of immediately was super into it.”

Lucia Mozingo, 10, of Long Beach, says she’s been spreading her love for the show “like a disease” among her grade-school classmates.

She and Sammy, who watches her after school, can mimic their way through entire episodes, sing every word to Phoebe’s song “Smelly Cat” and can do impressions of every major character and many minor ones.

The show has become almost a rite of passage in some circles, where their Friends phase is almost a coming-of-age.

For girls like Lucia, understanding the show’s adult-but-not-too-adult subject matter can feel like a step into sophistication.

“My parents showed me the show Friends when I was 8, and I didn’t really get it, so I wasn’t really into it.”

Then, trying it again at 10, it all clicked, and she understood why Ross and Rachel got together, and why they broke up, and why they got back together again.

Friends, some fans said, is a piece of the past that allows them to fantasize about their future. They swoon at the notion of living in a big-city apartment with their best friend the way Courteney Cox’s Monica and Jennifer Aniston’s Rachel do, with two more friends across the hall like Matthew Perry’s Chandler and Matt LeBlanc’s Joey.

“I would love to live across the hall from my best friends,” said 12-year-old Imogen Schwartz of Glendale, Calif. “When you watch it you wish you had a Rachel and a Chandler and a Joey and everyone else.”

The characters also have fledgling careers that the girls can see themselves aspiring to.

“My favorite moments are whenever they’re talking about their jobs: actor, musician, masseuse, fashion-person,” said 13-year-old Esme Goldman of Pasadena, Calif. “I think jobs are interesting.”

And they live and work in an idealized New York, a dream of some young fans.

“I want to live in New York. I want to pursue my dreams in New York,” Esme said, “even though their version of New York is completely unrealistic. I’m not going to have an apartment like that.” 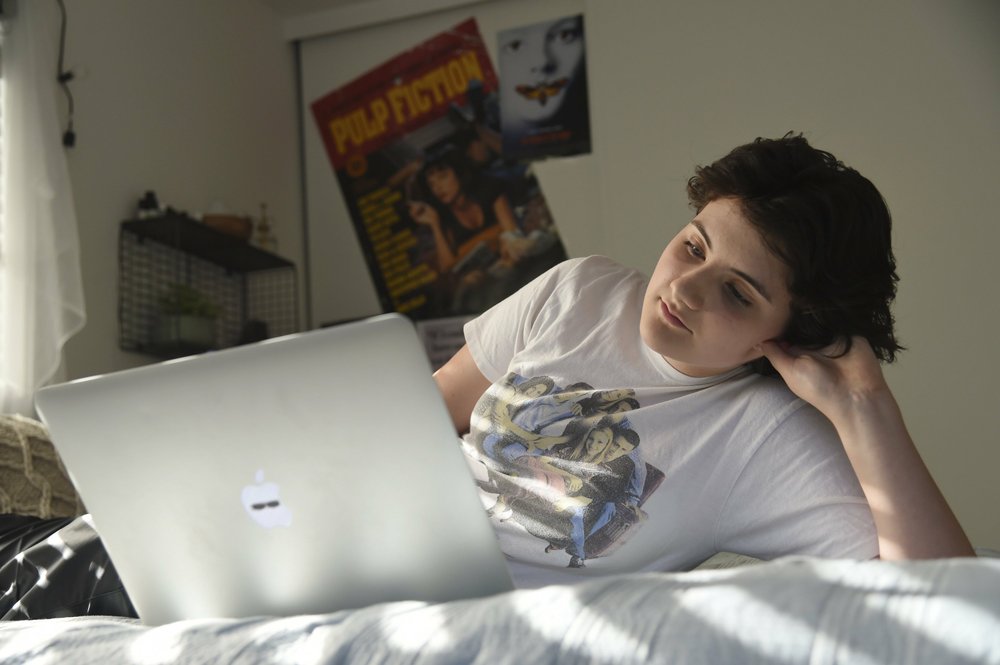 Esme Goldman, 13, of Pasadena, Calif., watches episodes of Friends on her laptop. “I want to pursue my dreams in New York, even though their version of of New York is completely unrealistic. I’m not going to have an apartment like that,” Esme said. (Photo by Chris Pizzello via INVISION/AP)

Marta Kauffman, who along with David Crane created the show that premiered on Sept. 22, 1994, agreed that its aspirational qualities are a huge part of its appeal for younger viewers.

“For the characters themselves, this is that kind of time in their lives when their friends are their family, I think that’s incredibly aspirational,” Kauffman told The Associated Press. “Teenagers who imagine it are imagining that kind of life when they’re with their friends.”

Lisa Kudrow’s Phoebe, and her proudly eccentric persona, has special standing among young-girl fans, who overwhelmingly name her as their favorite character.

“She’s different, but she doesn’t really care,” Lucia said. “Like, she’s always trying to cleanse your aura, and like, she’ll make her own shoes with candy on them.”

Phoebe’s personality, with her strange folkie songs and odd observations, would make her a social-media star.

“Phoebe would be a very popular YouTuber,” Imogen said.

Most young fans also immerse themselves in Friends on social media. Its archetypal characters including David Schwimmer’s Ross and catch-phrases make it incredibly meme-worthy, and many say they first decided to watch it after being prompted on Instagram or Snapchat.

Netflix, which paid a reported $100 million to stream Friends through 2019, rarely releases streaming figures, and declined a request for them for this story, making it difficult to know how broad the trend truly is. There’s an abundance of anecdotal evidence — the number of T-shirts at malls and school campuses alone — that suggests it’s vast.

Other sitcoms, such as The Office, also have masses of surprisingly young viewers, but few are as old, or as traditional in format, as Friends.

Yet its age could also be an asset. While a current show might only offer a few short seasons to plow through, Friends has a decade’s worth, 236 episodes to binge on and return to repeatedly. That’s more time than some young girls have spent with most of their real-life friends. They feel like they really know the characters.

“You got to watch Chandler and Joey and Monica and Rachel and Phoebe and Ross all, like, throughout a decade go through ups and downs and everything between,” Imogen said.

And some may not even realize it’s old at first.

The days of Friends on Netflix are now numbered. WarnerMedia is moving the series to its own streaming platform, HBO Max, next year.

That has some young fans scrambling to gorge on episodes, unsure if their parents will spring for the new channel.

“Since they’re taking it off Netflix,” Imogen said, “I want to get in as much time watching Friends as possible.”

Print Headline: Gotta have F*R*I*E*N*D*S: 25 years after the sitcom debuted on NBC, it proves it can be more popular