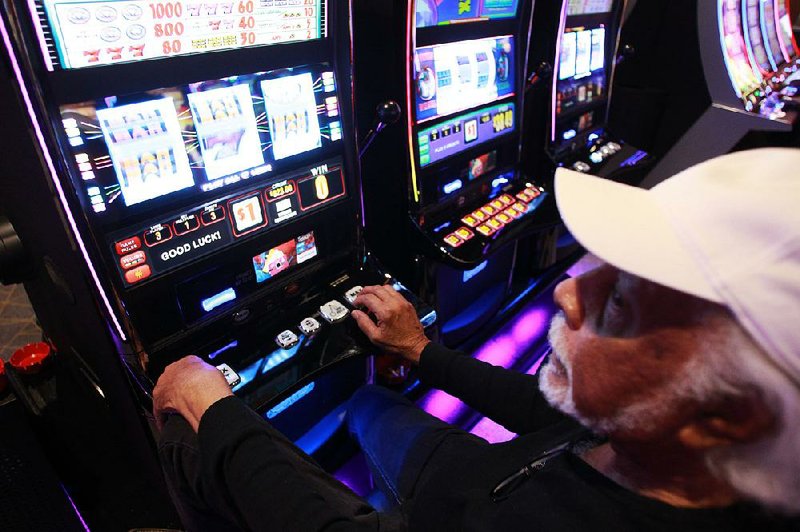 "It's an amenity," casino project manager Carlton Saffa said when asked how much gambling casino officials project each year for sports betting. "It's one more option. In terms of a projection, we'll see."

John Berry, chairman of the Quapaw Tribe, added that the tribe doesn't offer sports betting at its casinos in Oklahoma. The racing commission in June approved the license application of the tribe's Downstream Development Authority to build the Jefferson County casino.

Casino officials plan to open an 80,000-square-foot casino with 2,000 slots across the street by the end of next year.

The Saracen operation is the second Arkansas casino to win the seven-member racing commission's approval to begin sports wagering.

The commission -- chaired by Alex Lieblong of Conway -- approved the casino's sports wagering plans during a meeting that lasted about 15 minutes. The commission also includes Mark Lamberth of Batesville, Butch Rice of Beebe, Denny East of Marion, Michael Post of Altus, Bo Hunter of Fort Smith and Steve Landers of Little Rock, according to its website.

In contrast, more than $150 million was bet on the casino's 1,234 machines in each of these months, the records show.

Oaklawn General Manager Wayne Smith said Monday in a written statement that "sports betting at Oaklawn has gone as anticipated over the past 3 months -- starting with our soft opening July 1 to the month of September with a full month of college and pro football."

The racing commission hasn't considered any sports betting plan for Southland Casino Racing in West Memphis yet, Scott Hardin, a spokesman for the state Department of Finance and Administration, said after the commission's meeting.

"Delaware North [Southland's owner] is working to enlist a technology partner for sports wagering and does not have a start date for our sportsbook at Southland Casino Racing," said Glen White, a spokesman for the New York-based company.

"When we have a partner selected, we will make an announcement," White said in a written statement.

Oaklawn selected SBTech as its sole provider for onsite sports wagering, according to Oaklawn's proposal.

Saracen is working with International Game Technology to use its sports betting platform known as "Play Shot" as its technical and general provider, according to the casino's proposal.

The Saracen Annex will open with a "sample sports book" that consists of sports betting kiosks that allow smaller wagers with maximum bets of $500, according to the casino's proposal.

"The sample sports book, or 'limited betting' option, will be a sports betting introduction to the local market and provide an introduction for the full-scale sports book that will be located at the Saracen Casino Resort," the proposal states.

Amendment 100 to the Arkansas Constitution, approved by voters in November, opened the door for Oaklawn and Southland to expand their "electronic games of skill" into full-fledged casinos and offer sports betting.

The constitutional amendment also allows the Racing Commission to license casinos in Jefferson and Pope counties, as long as they have the support of local elected officials, and allow for sports betting at the casinos.

In June, the commission rejected all five applicants for the Pope County casino license because they didn't meet a commission rule that specified that the endorsements had to be from current officials.

After the county endorsed Cherokee Nation Businesses in August, the commission opened a second 90-day window to accept applications, which closes Nov. 18.

Tennessee is one of five states in which sports betting is authorized but not operational yet, the association reported.

Louisiana, Missouri and Texas are among 18 states in which sports betting legislation is dead for this year, and Oklahoma is among eight states that had no sports betting bills this year, the association said.

Helped in part by the expansion of sports betting, the commercial casino gaming sector logged its fourth consecutive year of gaming revenue growth in 2018, surging nearly 3.5% to $41.7 million, the association reported in June.

Arkansas is the 25th state to legalize commercial gambling and the 41st state with legal casino gambling, including tribal casino operations, according to the American Gaming Association. Among Arkansas' surrounding states, there are commercial casinos in Louisiana, Mississippi, Missouri and Oklahoma, and there are tribal casinos in Louisiana, Mississippi, Oklahoma and Texas, the association reported.