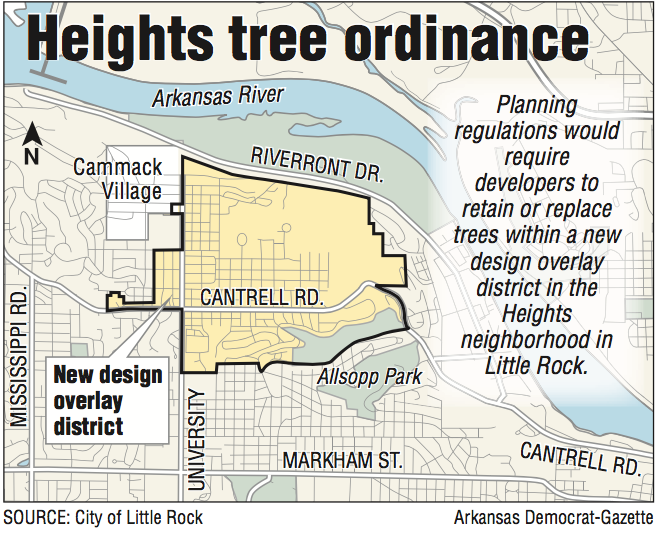 A map showing the area of the Heights tree ordinance.

Tree preservation rules for Little Rock's Heights neighborhood are set to go before the city board for final approval tonight.

The Little Rock Planning Commission voted unanimously in April to recommend an ordinance establishing a design overlay district encompassing the neighborhood to the Board of Directors.

The new regulations would affect anyone constructing a new residential unit or making an addition of more than 600 square feet of foundation area on the property. If the proposed ordinance passes, such property owners and developers will either have to maintain the existing trees on the property or plant one new 2.5-inch caliper tree per 40 feet of street frontage, or retain one tree 12 inches or greater.

A group of Heights residents, concerned that an influx of development would jeopardize the tree canopy that they say makes the area unique, began working to develop proposals for regulations. The Heights Neighborhood Association participated and recommends approval of the ordinance. Others have expressed concerns about the ordinance infringing on property rights.

The new regulations wouldn't apply to structures approved for commercial use.

Any request to vary, alter or modify specifications of the design overlay district would be processed as a request for variance considered by the Little Rock Board of Adjustment, according to the proposed ordinance.

"People in the Heights are very upset," she said. "They're losing trees every day."

The city board's voting meeting will be on a different night this week because of National Night Out being observed Tuesday. The meeting is scheduled for 6 p.m. today in City Hall at 500 W. Markham St.