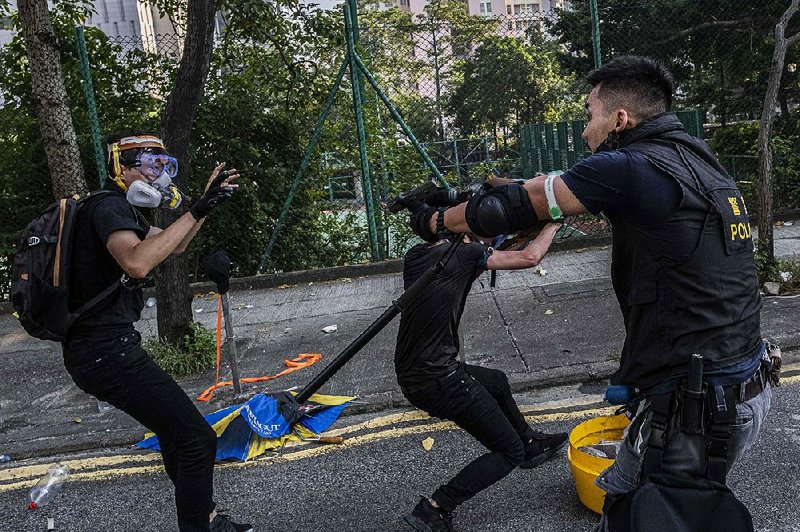 A police officer points his handgun at a protester Tuesday during one of several clashes around Hong Kong. More photos are available at arkansasonline.com/102march/

HONG KONG -- In an escalation of force against protesters, Hong Kong police for the first time fired live ammunition directly at demonstrators Tuesday during street clashes as China celebrated the 70th anniversary of Communist Party rule. At least one protester was seriously wounded.

The live fire was a new level of violence in a city already on edge over allegations of police brutality and an erosion of freedoms -- all unfolding on a sensitive date for China under its leader, Xi Jinping, as he presided over grand military processions in Beijing.

The clashes are likely to provoke a fresh wave of anger on the streets as Hong Kong's unrest spills into its fifth month. Hong Kong leaders, meanwhile, face a possible reckoning over whether to keep ramping up their tactics as protests show no sign of easing and during a severe breakdown in trust between residents and police.

In Beijing, Xi used the anniversary ceremony to boast of China's military and economy power -- and its unity.

[Video not showing up above? Click here to watch » https://www.youtube.com/watch?v=vQBPaeQPJQ0]

"Forging ahead, we must remain committed to the strategy of peaceful reunification and 'One Country, Two Systems.' We will maintain the long-term prosperity and stability of Hong Kong and Macao," Xi said, referring to the principle that the former European colonies have a degree of autonomy from Beijing.

But Xi's message faced a counterpoint in Hong Kong. Hundreds of thousands of protesters -- ignoring warnings from authorities -- sought to reinforce their stance against Beijing: protect Hong Kong's freedoms and grant it full democracy, or face continued dissent.

"We have to send a message to the government and the police, that we are not afraid of them, and that going out to protest is our right," said Fok, a 24-year-old who spoke on the condition that he be identified only by his last name, as he has already been arrested for protesting. "It is time to show China they picked the wrong people to bully. This is a war, and we will win it."

Right after daybreak on Tuesday, the Chinese flag was hoisted accompanied by the national anthem in Hong Kong. But because of safety threats, officials watched from inside a convention center. A planned fireworks display was canceled.

Protesters were carrying Chinese flags with its stars rearranged into swastikas, and ripping celebratory banners from buildings in protests in marches that spread out over more than five Hong Kong districts.

Half of the subway network was closed by night, and protests had spread to more than a dozen areas.

"They are squeezing our necks so we don't breathe the air of freedom," said King Chan, a 57-year-old homemaker who marched with her husband.

By sundown, police used tear gas, water cannons filled with blue dye and baton charges to clear away the protesters, some of whom were peaceful while others threw bricks and fuel bombs.

According to a pro-democracy lawmaker and a video filmed by the Hong Kong University Students' Union Campus TV, a protester in the Tsuen Wan neighborhood who was dressed in black, wearing a helmet and respirator, and carrying a homemade shield was shot by a police officer wielding a revolver. The video shows the man swinging a rod at the officer before the officer fired once, at close range.

The shot sent the protester tumbling backward over another officer, who was already on the ground.

Police Commissioner Stephen Lo said there was no order for police to shoot if they are under threat but they can use appropriate force. He described protesters as "rioters," saying they have committed widespread criminal acts -- from attacking police officers, including 25 who were injured, to destroying public property and vandalizing shops and banks linked to China.

"The officer was under attack, his life was threatened. ... He made a very quick decision and shot the assailant. I believe it was his best judgment at the time," Lo said.

He added that although the officer also had a rifle for rubber bullets, the event unfolded very quickly. He didn't answer questions on why the officer fired at the teen's chest and not his limbs.

Apart from the incident in Tsuen Wan, he said officers also fired five warning shots in four other areas. Police arrested more than 180 protesters, he added.

Hong Kong's hospital authority said the teen was one of two people in critical condition, with 66 injured

"Whilst there is no excuse for violence, the use of live ammunition is disproportionate, and only risks inflaming the situation," U.K. Foreign Secretary Dominic Raab said of the protests in the former British colony that was returned to Chinese rule in 1997.

Carrie Lam, the Hong Kong chief executive who protesters decry as a pawn of Beijing, was not in the city, but instead attending the parade in the Chinese capital. Lam had traveled to Beijing for the anniversary with a delegation of more than 200, including business tycoons and pro-China lawmakers.

The protests started in June as a rebuke against a now-scrapped piece of legislation that would have allowed fugitives to be transferred from Hong Kong's independent legal system to mainland China.

But perceptions of government inaction and shock over police use of force have turned the movement into a full-blown rebuke of Beijing's tightening control over the city, and revived a yearslong demand for direct elections of city leaders.

Some of the people in the march wore "We are Hong Kongers" T-shirts, a rejection of Chinese identity, and held their hands up showing all five fingers for their five demands. The government has met one of these demands -- the withdrawal of the extradition bill -- but has declined to make further concessions, including an independent investigation into the police.

A handful of pro-China rallies took place around the city, with people gathering in small groups to wave the Chinese flag and sing the national anthem.

Meanwhile, President Donald Trump congratulated China on the 70th anniversary of communist rule in a tweet that drew a sharp contrast with other Republican messages.

"Congratulations to President Xi and the Chinese people on the 70th Anniversary of the People's Republic of China!" Trump tweeted Tuesday morning.

Senate Majority Leader Mitch McConnell said the occasion should serve as a reminder of the "many millions of lives lost under Chinese communist rule."

McConnell, along with Sens. Tom Cotton and Ben Sasse, called attention to protests in Hong Kong.

"The freedom-seekers in Hong Kong mourn this anniversary, and the American people stand with them against those who deny their God-given dignity."

And Cotton, R-Ark., said, "From the Great Leap Forward to the Cultural Revolution to the camps in Xinjiang today, it has been a ghoulish 70 years of Chinese Communist Party control."

"This is not a day for celebration," Cheney said in a joint statement with Rep. Mike Gallagher, R-Wis. The United States will use the occasion to "rededicate ourselves to ensuring that the Chinese Communist Party is left on the ash heap of history," they added.

While Trump has gotten bipartisan praise for taking a stronger stance against China's trade practices and theft of intellectual property, some lawmakers from both parties have urged him to hold China accountable for human-rights abuses. The two countries also are negotiating a trade truce after scaling up tariffs that are beginning to drag on economic growth in both countries.

Information for this article was contributed by Shibani Mahtani, Timothy McLaughlin, Casey Quackenbush, Anna Kam, Tiffany Liang, Anna Fifield and Colby Itkowitz of The Washington Post; by Eileen Ng, John Leicester and Kelvin Chan of The Associated Press; and by Daniel Flatley of Bloomberg News. 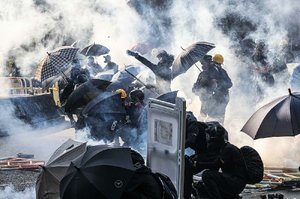 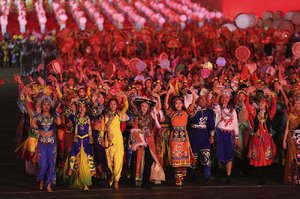 A map showing the location of the Hong Kong protests.