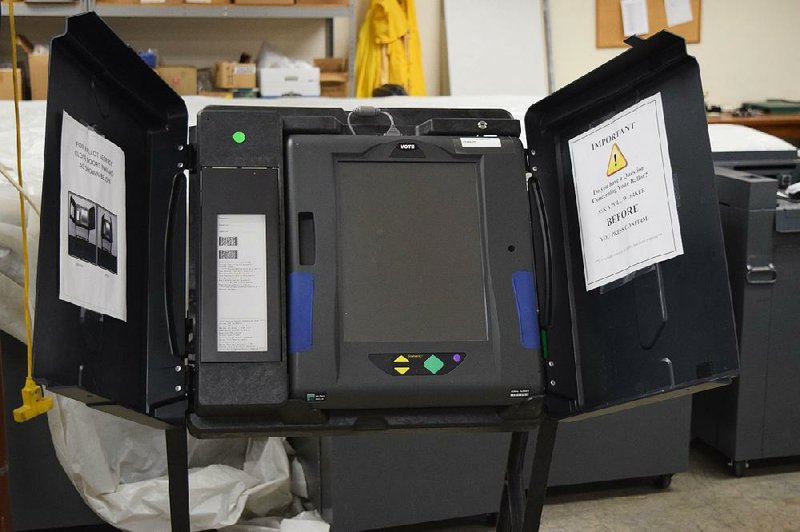 Some of Pulaski County’s voting machines, including more than 250 iVotronics like this one, were purchased in 2001. They use processors that were introduced in the 1980s and have 1-2 megabytes of memory.

New voting equipment is coming to Pulaski County, but not in time for the March primary election, officials said Monday.

At a meeting of the Pulaski County Election Commission, chairwoman Evelyn Gomez provided an update on funds set aside by Secretary of State John Thurston's office to support the purchase of updated equipment.

County officials thought that a dollar-for-dollar match was required to secure those funds, but that turned out to be incorrect, she said.

"We were under the impression that there was a match, and it was dispelled," she said.

The funding for new voting equipment had agitated leaders in some counties around the state after Gov. Asa Hutchinson announced $8.24 million in funds marked for that purpose.

In previous interviews with the Arkansas Democrat-Gazette, some officials said a match was required, and Jefferson, Van Buren and Fulton county governments expressed doubts about their ability to contribute.

For Pulaski County, the situation was cleared up at a meeting last week that included commissioners, two representatives from Thurston's office and county and circuit clerk Terri Hollingsworth.

Gomez said she thought there had been "some miscommunication" from the secretary of state's office, but she did not wish to speak for them, regarding the source of the confusion.

The upshot is a payout of roughly $1.6 million to replace aging voting equipment in the state's most populous county.

But Gomez said a purchase likely won't take place until at least February, after the county's budgeting process is complete.

That's in hopes that there will be carryover county funds at that time to shore up a buy, and some changes also are being made to estimates regarding the types of equipment that will be purchased.

The timeline means new equipment won't be rolled out by Pulaski County for the presidential primary scheduled for March 3.

Considering a learning curve for new machines and training of poll workers, it's possible that machines ordered even in October wouldn't have been ready for the primary, Gomez added.

"Instead of piece-mealing, I think waiting a couple of months would be appropriate," she said.

She was optimistic about the prospect of new voting stock being in play for the 2020 general election.

On Monday, Gomez apologized on behalf of the commission for its meeting with the secretary of state's office, which she said violated the Arkansas Freedom of Information Act by not being appropriately announced to the public and the media.

Hollingsworth brought the violation to her attention as the group convened, and commissioners Joshua Price and Kristi Mckinnon were dismissed from the gathering to rectify the situation, Gomez said.

When the group returned, commissioners voted to take an unspecified disciplinary action against an unnamed employee. More would be disclosed at a future public meeting, they said.

Asked in an interview if that personnel matter would include a suspension or termination, Gomez reiterated that it was a disciplinary action.