RESTAURANT REVIEW: The Butcher Shop has dazzled diners in Little Rock for decades 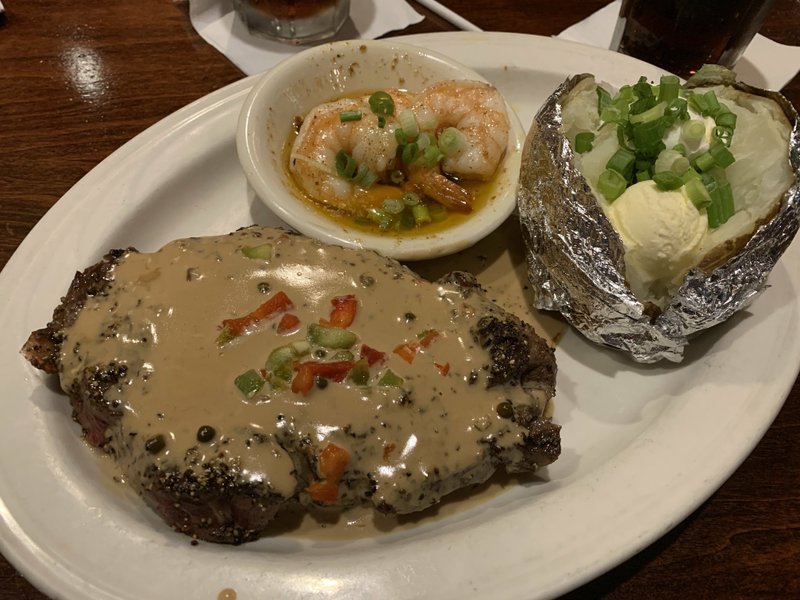 The Butcher Shop has been serving quality steaks for nearly four decades, more than two of those in its current west Little Rock location.

It opened in 1982 on Asher Avenue west of University. (It succeeded two previous restaurants there, and how many establishments, most recently a series of short-lived private clubs, have passed through that building at 7200 Asher since?)

Based on a model field-tested in Memphis, the "gimmick" was that customers selected their own house-cut-and-aged beef and grilled it themselves at one of three charcoal pits. The flat cost was $9.95, which included endless baked potatoes, French bread or garlicked Texas toast — you could grill that yourself, too — and an all-you-can-eat salad bar. Beverage extra.

The ads proclaimed, "Prepared by the best chef in the world — You."

If you didn't consider yourself much of a chef, and/or didn't want to do the cooking yourself, the staff would do it, for an extra buck. ("After all," as we observed in our initial 1982 review, "when you go out you're looking for service, right?" And we noted this disadvantage: "If it's not cooked the way you like it, you can't send it back.")

There was, very briefly, a second location at 2811 Cantrell Road in the mid-'80s, and meanwhile, The Butcher Shop had expanded into a mini-chain with Dallas and two more Tennessee cities (Cordova and Knoxville). As far as we can tell, only the Cordova restaurant also survives.

The Little Rock restaurant moved at the end of 1998 to the former Austin's Wood Grill on Hermitage Road. (One end of the short street connects to Shackleford Road, the other to Financial Centre Parkway.)

The original cook-your-own option is still available, though few now exercise it. (You can even still grill your own Texas toast.) However, the restaurant still, according to its website, cuts its own steaks "from the highest quality grain-fed beef direct from the Midwest, ... aged four weeks before being skillfully hand cut by our 'in house' butcher." And you can still choose your steak from a glass-fronted cooler where the dining room meets the kitchen.

Wheelchair access: Through an entrance on the right side

Unlike some area steakhouses, where steaks are seasoned to the extreme, those at The Butcher Shop are very simply seasoned, if at all. That's a big plus if what you want most out of a steak is to taste the meat. Many people do.

Some diners don't. Among them: Intrepid Companion, who declared her 10-ounce bacon-wrapped filet ($26.95) bland and boring. Even the smoke flavoring in the bacon didn't add much savor. A larger filet (additional options: 6-ounce, $26.95, or 14-ounce, $37.95) or a smaller plate might have made the plate presentation of steak and loaded baked potato look a little less lonely.

In the kitchen's defense, the steak was otherwise perfectly prepared — medium rare, just as we ordered it; well-trimmed, practically exterior-fat-free (not, of course, counting the fat in the bacon) and exceptionally tender.

You do have options. You can add salt and pepper — they're on the table. And the server will provide steak sauce — she specifically mentioned A1 and Heinz.

And for an additional $1.50, you can have your steak blackened, "encrusted with our blackening spices and seared to desired temperature. Very spicy."

The steak was well-marbled and a little fatty around the edges, but that's in keeping with a good rib-eye. Not all the peppercorns were cracked, which gave the steak a layer of texture we weren't expecting. The demiglace sauce, perhaps just this side of a thin gravy, was certainly flavorful, but a not entirely appetizing sort of green-gray, specked with bits of green and red bell peppers. It was definitely not bland, but it might have taken our rib-eye a bit too far in the other direction — had there been any more of it, it would have been very easy to lose the steak. We got it as a $28.95 that-night special with three Cajun shrimp (otherwise $4.50 as an a la carte add on or as a six-for-$8.95 appetizer), sauteed in a zippy Cajun-seasoned butter. Worth checking out.

The Butcher Shop is one of the few, and certainly one of the better, places around here to get prime rib, which it serves in two sizes — a 12-ounce Regular Cut ($25.95) and a 20-ounce King Cut ($30.95). Our 12-ounce cut was plenty, perfectly medium rare (you can get it cooked "darker" than that, but with prime rib, that's heretical), served with a small plastic cup of "au jus" and a small plastic cup of a mild horseradish sauce, neither of which particularly improved the beef.

All steak and prime-rib dinners come with a house salad of mixed greens — adding, at the server's suggestion, bleu cheese crumbles helped kick up the bland bleu cheese dressing a little; substituting a blandly dressed small Caesar for $1.95, however, wasn't an improvement — and choice of baked potato or fries. Our potato was baked to just the right degree of in-skin mashability; they're available fully loaded, but we were more than satisfied partially loading one with butter, sour cream and a possibly over-generous portion of chives.

Our sauteed mushrooms appetizer ($6.95; half-order $3.95, also available as an add-on or as a $1.95 cup-size substitute for a potato) appeared to be sauteed more in its own juices than butter, without perceptible garlic or red wine, and while we appreciate the firm texture and full mushroom flavor, they were underwhelming. The full portion was plenty for two. You should order the half portion if you're by yourself or otherwise not planning to share.

The Jumbo Shrimp Cocktail (also $8.95) consists of a half-dozen good-size, fully chilled, firm-fleshed shrimp ("jumbo" may be a bit of an exaggeration), laid flat on a plate flanking a small vessel of cocktail sauce that had some, though not a lot, of kick.

The Butcher Shop has been, and remains, a pleasant place to dine, remaining on the right side of the division between grand and grandiose, retaining the brick-and-plant decor that it has had for two decades, with the addition of a few new framed artworks and chandelier-style lighting fixtures.

Seating is still in booths around the edges and at tables in the middle of the main dining area, which has a large wood-and-glass island, festooned with plants, at the center; satellite dining rooms provide additional seating and can be sectioned off for large or private parties. You can see the big open kitchen from almost anywhere in the restaurant. Service was good-to-excellent.

But drat and blast — last Friday was the last Steak Burger Friday lunch of 2019, and we missed it.