Trump touts support for Medicare, slams ‘Medicare for All’ 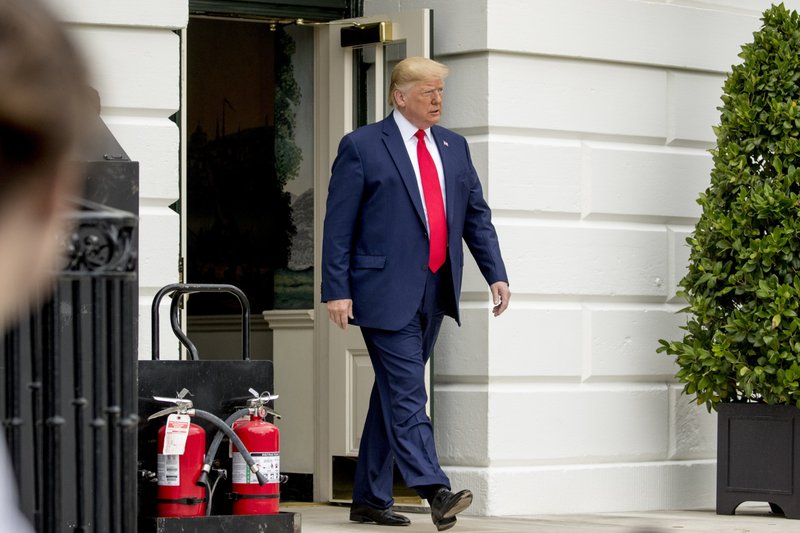 President Donald Trump walks out of the White House to speak to the media on the South Lawn in Washington, Thursday, Oct. 3, 2019, before boarding Marine One for a short trip to Andrews Air Force Base, Md., and then on to Florida. (AP Photo/Andrew Harnik)

WASHINGTON — President Donald Trump intends to tout his support for Medicare and slam left-leaning Democrats on their “Medicare for All” proposal when he visits Florida on Thursday.

Administration officials say Trump plans to sign an executive order that calls for a series of changes, including a broader role for Medicare’s private insurance option, as he visits The Villages, a bustling community for adults in Central Florida. That part of the state overwhelmingly supported Trump in 2016.

The trip is political messaging combined with a dose of health care policy, and it comes as the Republican president angrily defends himself against House Democrats’ impeachment inquiry.

Trump is calling the Medicare for All plan from Vermont Sen. Bernie Sanders a “socialist” idea that would destroy Medicare. Sanders’ “single-payer” approach would cover people of any age under a new government plan for all.

Medicare administrator Seema Verma said on Thursday that Trump is a “great protector of the Medicare program” and that Sanders’ plan would “eviscerate” it. She called Sanders’ idea not just impractical but “morally wrong,” saying it would “demote American seniors to little more than second-class status.”

The Sanders plan would incorporate the Medicare program, but private health insurance — including the Medicare Advantage option used by about one-third of seniors — would no longer have a role. Sanders, who unexpectedly underwent a heart procedure this week, says Medicare for All would offer seniors broader benefits and lower costs.

Sanders’ style of single-payer health care has long been popular among liberals, but polling lately has shown that a majority of Democrats and independents who lean Democratic prefer expanding coverage by building on the Affordable Care Act, or “Obamacare.” Trump is asking federal courts to overturn that law as unconstitutional, after a Republican-controlled Congress failed to repeal it his first year in office.

Trump’s executive order does not involve a major overhaul of Medicare, which would require congressional approval. Instead, it pulls together a series of technical changes and administration priorities.

The subject of prescription drug costs also is sure to come up. Trump enthusiastically endorsed a plan by Florida’s Republican Gov. Ron DeSantis to allow patients to import lower-cost medicines from abroad and is pursuing a federal version. But the impeachment inquiry has cast a cloud on prospects for major legislation to reduce drug prices.

Trump’s executive order is basically a to-do list for the Department of Health and Human Services. It will require months of follow-up. Among the priorities are an expansion of telemedicine and changes to avoid overpaying for procedures just because they get done in a hospital instead of a doctor’s office.

Much of the order focuses on Medicare Advantage, the private insurance option under Medicare. Medicare Advantage plans offer savings on premiums and an annual limit on out-of-pocket costs. They provide one-stop shopping, eliminating the need for separate supplemental insurance. Offered by major insurers, the plans also cover prescription drugs in most cases.

But there are trade-offs. Seniors joining a Medicare Advantage plan generally must accept limits on their choice of hospitals and doctors as well as prior insurer approval for certain procedures. If they change their minds and decide to return to traditional Medicare, they’re not always guaranteed supplemental “Medigap” coverage, which is also private.

Health and Human Services Secretary Alex Azar said Trump’s order directs his department to examine whether its current policies and practices put traditional Medicare ahead of the private Medicare Advantage option. Some advocates for older people say that it’s the other way around and that the administration is trying to put private plans ahead.

The order also would seek to expand the range of additional services that can be offered by the private plans and would direct regulators to find more ways for seniors to financially benefit from plans that provide cost-efficient service.

Many Medicare Advantage insurers offer some dental and vision coverage, along with basics like transportation to medical appointments. But the industry lately has started to experiment with in-home assistance, including nutritious meals, and financial help with safety-related home improvements.

As a presidential candidate, Trump promised not to cut Medicare. As president, he has avoided calling for privatization of the program or raising the eligibility age beyond 65 or rolling back benefits.

However, Trump’s latest budget proposed steep cuts in Medicare payments to hospitals and other service providers, prompting protests from the industry and accusations by Democrats that he was going back on his promises to seniors. The Medicare cuts have gone nowhere in Congress, as Republicans backed away from the president’s budget.