Wolves get ready for subdued setting 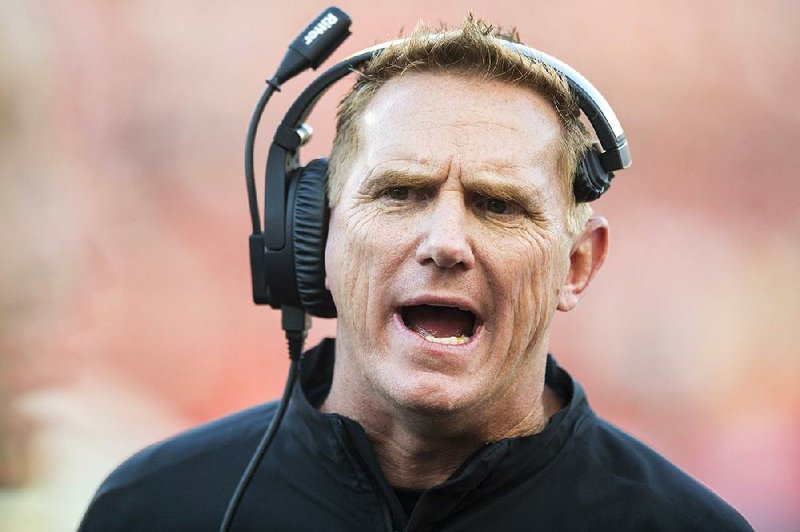 Arkansas State Coach Blake Anderson said this week he has prepared the Red Wolves “for less of an energetic environment” in today’s game against Georgia State at Atlanta. ( Jeff Gammons)

There was no music blaring from the speakers, as is customary with all practices. But it wasn't because of technical failures or anything of the sort.

NOTEWORTHY ASU has won its past three road games in Sun Belt play. … ASU is playing its fourth road game in the past five weeks. … Blake Anderson said sophomore running back Marcel Murray (ankle) and senior wide receiver Dahu Green (knee) are game-time decisions, although Murray said this week he expects to play. Freshman running back Isaiah Azubuike (hip) and junior defensive end Jeffmario Brown (shoulder) are probables. … ASU and Georgia State are nearly identical in some major statistical categories. ASU is averaging 32.8 points and 432.8 yards per game, while giving up 36 points and 498.6 yards per game. GSU is averaging 32.5 points and 419.3 yards per game, while surrendering 493.5 yards and a league-worst 41.5 points per game.

This week, the Red Wolves (3-2, 1-0 Sun Belt Conference) wanted to turn off the music and make the environment as humdrum as possible in an effort to simulate what they expect to be a similar atmosphere this afternoon.

ASU faces Georgia State (2-2, 0-1) in Atlanta at 2:30 p.m. The Panthers play in a converted baseball stadium -- the old Turner Field, which is the former home of the Atlanta Braves -- and it's not exactly a raucous college football venue that gets packed with fans.

Anderson said he believes this is the type of game where bringing your own energy is at a premium.

"We've gone without music every day to try to simulate a little bit less of an energetic environment than we're used to. We're used to pumping out here," Anderson said. "So we don't want to expect the energy to come from off the field. We need it to come from inside.

"I think the guys have handled that well. That's different. We've been playing music for the last 10 years, longer. And you wouldn't think that's a big deal, but when you get out here and it's quiet, you got to find it."

Energetic environment or not, Georgia State is a team that can't be taken lightly. The Panthers are a month removed from a 38-30 upset victory over Tennessee in Knoxville in the season opener.

Since then, Georgia State has come down from that high. The Panthers narrowly beat FCS Furman the next week before getting blown out by Western Michigan and losing in overtime two weeks ago to Texas State. Georgia State was off last week.

But the Red Wolves are fully aware of what this team is capable of doing.

"We talked about it on Tuesday, when we kind of give a preliminary scouting report, about [how] these guys have beat Tennessee, they've gone into Neyland Stadium -- regardless of what you think of Tennessee, we know they got good athletes on the field," Anderson said. "So you got to respect everything they do.

"We've had to play these guys down to the wire before in past history. We're playing at their place. We know the environment's gonna be different than what we're used to, so there's a lot of challenges."

ASU is in the second week of the Layne Hatcher era at quarterback, after junior starter Logan Bonner was lost for the season four games in with a torn ligament in the thumb of his throwing hand.

Hatcher passed the eye test in his first start last Saturday at Troy, throwing for 440 yards, 4 touchdowns, 2 interceptions and completing 71.4% of his passes while guiding the Red Wolves to a 50-43 victory.

Hatcher is settling in to his new role as ASU's starting quarterback.

"I feel comfortable," he said. "I felt like [offensive coordinator Keith Heckendorf has] done a great job getting me ready, really trying to hit on the stuff that I'm more comfortable with and focus on my strengths and not necessarily putting me in a situation where I have to work off some of my weaknesses. He's done a great job of play-calling and just getting me in situations that I really like."

Georgia State has a dual-threat quarterback in senior Dan Ellington, who's proven to be a tough player to defend.

Through four games, Ellington has thrown for 846 yards, 11 touchdowns and 2 interceptions, with a 62.5 completion rate. Ellington is also the Panthers' second-leading rusher with 244 yards and a touchdown, and he ranks second in the Sun Belt in total offense, averaging 272.5 yards per game.

"Any time he's got the ball in his hands, he's a really dangerous weapon on their side," ASU defensive coordinator David Duggan said. "They run the option phase with him ... so he's a very dynamic player, and he can throw it well enough that you got to worry about defending the passes well. Sometimes when you get option-type schemes, they don't throw it quite as well. This guy can throw it and run it, so he can hurt you both ways."

Ellington and Georgia State's capable offense will serve as another test for the battered Red Wolves defense, which is now down three starters because of injuries, including two on the defensive line.

Anderson announced Monday that junior nose tackle Forrest Merrill is out for the season with a torn bicep, and senior defensive tackle Kevin Thurmon is still out with a broken hand. Anderson said Wednesday that it's "very conceivable" Thurmon could return after the bye week to face Louisiana-Lafayette on Oct. 17.