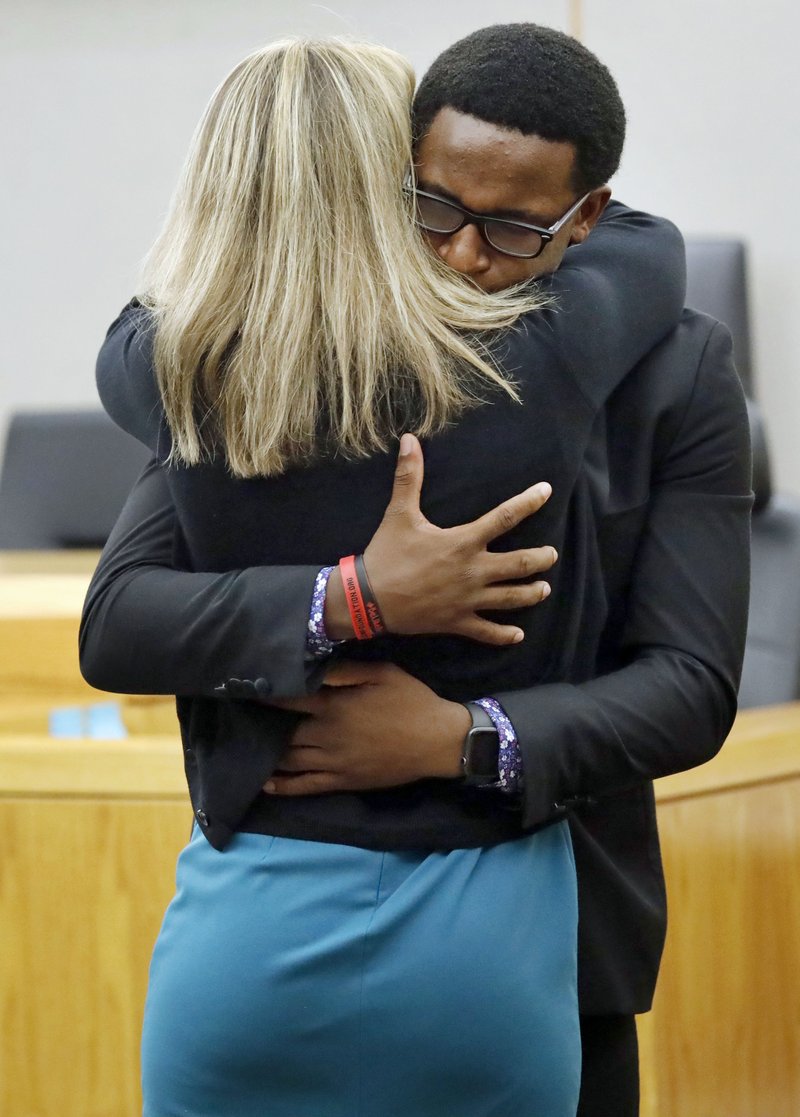 Botham Jean’s younger brother Brandt Jean hugs former Dallas police officer Amber Guyger after delivering his impact statement to her in Dallas, Wednesday. Guyger has been sentenced to 10 years in prison for killing her black neighbor in his apartment, which she said she mistook for her own unit one floor below.

None of us is saved by justice. God forbid we get what we deserve! There is a certain Book that reminds us of that, and tells us that by grace are we saved, for we cannot save ourselves. If justice awaited us all, the end--whatever that is--would be worth fearing. There would be no heaven if we had to earn it.

In one of the great speeches that Shakespeare ever put on paper, Portia explains it:

The quality of mercy is not strain'd,

It droppeth as gentle rain from heaven

Upon the place beneath: it is twice blest;

It blesseth him that gives and him that takes:

'Tis mightiest in the mightiest: it becomes

The throned monarch better than his crown.

She says the earthly power of a king most resembles God's when he shows mercy to those asking for it. It applies to those of us who aren't kings, too. As we pray for mercy, we soon learn to be merciful ourselves. If He created us in His image, then maybe mercy is a way that we can attempt, feebly, to live up to that image. The weak cannot forgive, another wise man and Great Soul once told us. Forgiveness is the attribute of the strong.

This past week we saw pictures of an angry president on the front pages, barking at the press and the hounds that chase him, but we repeat ourselves. Dirty words, once paraphrased or disguised, now make the news. A film in theaters this week, about a comic book character no less, has people on edge. There was a plane crash. Stock shares crash, hopes are dashed, people forget.

And then, in yet another story that might keep many of us from getting out of bed in the morning, either because of depression or fear, came a certain restoration. Like a repair or mend. Consider it more renovation than patchwork. The highlight of the story: a simple embrace.

It was as if the rest of the news stopped for a moment. We can imagine the video editors at television stations across the land pausing, and rewinding the tape. Hey, boss, you should see this. Should we lede with it? Can we lede with something kind and special and uplifting?

Of course, news being news, the story didn't start out to be pleasant. An innocent man is dead. A man with Arkansas ties. A man strong in his church, with a family who loved him and friends who miss him. He was in his apartment, minding his own business and life, when a Dallas police officer mistook the apartment for her own, and shot him dead.

The former officer now faces a decade in prison. A jury has decided that should be her punishment. The whole thing was a mistake, but there are plenty of people in jail right now because of mistakes. Their number will increase by one.

But that part of the story only made the jump on Thursday. Because reporters thought the main point should be higher in the article: The younger brother of the dead man took the witness stand, forgave the former cop, and . . . asked for a hug.

In what could be described as a bizarre accident of fate, if not a miracle, his request was granted. In an American courtroom!

Brandt Jean and Amber Guyger made the front pages, and led the broadcasts, with an embrace.

The whole thing wasn't just an example for modern America. It was a message. A message that was taught thousands of years ago, and was written down by another king named David. In a Psalm, specifically No. 25:

Remember, O Lord, thy tender mercies and thy lovingkindnesses; for they have been ever of old.

Remember not the sins of my youth, nor my transgressions: according to thy mercy remember thou me for thy goodness' sake, O Lord.

Good and upright is the Lord: therefore will he teach sinners in the way.

All the paths of the Lord are mercy and truth unto such as keep his covenant and his testimonies.

For thy name's sake, O Lord, pardon mine iniquity; for it is great.

Pardon our iniquities, for we have a lot of them. Isn't that the story of mankind, from the garden to today? It's a powerful story. But one that's not complete. Every day we write another chapter. Another psalm. And, heaven help us, sometimes even journalists see an ecclesiastic narrative they can't ignore. And must get it in print.

All paths to the Lord are mercy. It's enough to make even the most hardened inky wretch pause and think prayful thoughts. And make the effort not to bury the lede today: We can bridge these canyons.