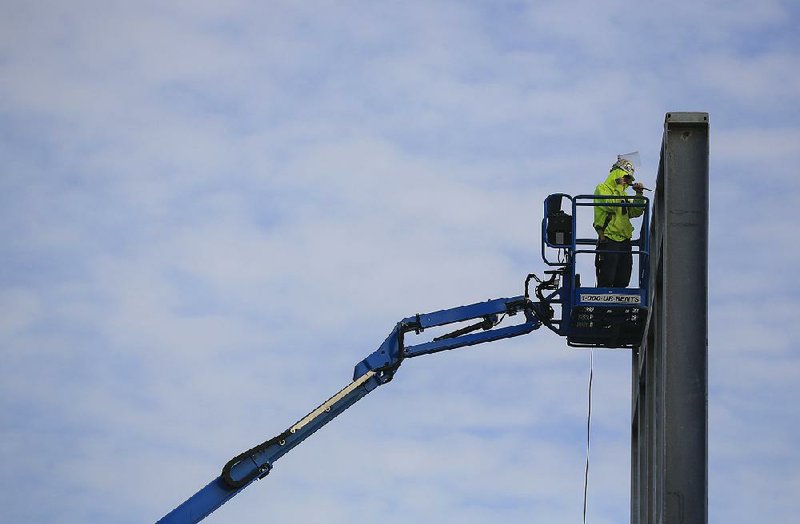 In this file photo a construction worker stands on a lift Thursday as he works on the steel being put up as part of the Argenta Plaza project in downtown North Little Rock. ( Arkansas Democrat-Gazette / Staton Breidenthal)

With much of the work already done at North Little Rock's Argenta Plaza downtown, it's become easier to imagine the different activities and possibilities the public "town square" will offer residents, office workers and city visitors alike.

Thousands of 6-inch-by-12-inch concrete pavers have been laid, the swings that evoke the feeling of a front porch are up, and the framework for a cascading waterfall has been installed for the $5.36 million city property at 510 Main St.

The plaza won't open to the public until Nov. 30 as part of North Little Rock's Northern Lights Festival that will kick off the Christmas holiday season downtown.

Preparing for that event, the North Little Rock Convention and Visitors Bureau staff spent part of a warm afternoon last week visualizing lunchtime workers, families and sightseers milling around the plaza's 42,000 square feet, sitting in the swings, watching the sprays of water from the jetted fountains or listening to live music from a raised stage.

"For me, it just makes it all the more real," Stephanie Slagle, marketing director for the Convention and Visitors Bureau, said of her firsthand look at the plaza. "We've been looking at diagrams of the plaza for months. To actually be in it and see the work that's been done and visualizing that a tent can go over here and there's music happening on the stage, you can see how it all fits together.

"It will be a really cool venue."

When the protective screens have been taken down for photo shoots or for testing of the fountains on some recent evenings, curious onlookers have been drawn to what's been done so far, said Bob Major, the Convention and Visitors Bureau's chief executive officer.

"We've actually had people wander in to ask if it was open and to see what was going on," Major said. "There is a lot of excitement right now about the plaza from people who are ready to experience something new in North Little Rock and something really new in Argenta.

"When you look at something on paper, you see one thing, but when you actually can stand down there on the paving stones and look around, it gives you a whole different perspective," Major said. "You really get excited about the potential of all the different things that can happen in the plaza area.

"The whole concept of the plaza is having an open space that can have so many different uses, from a concert on stage, to people coming down and enjoying what we call the front porch with the swings installed there and just relaxing."

The Convention and Visitors Bureau, now in Burns Park, will manage the plaza and its events. That will be easier to do once the $8.37 million, three-story 600 Main Building under construction just to the plaza's north is completed early next year. The bureau will relocate to 600 Main's first floor, complete with a Visitors Center and retail store to sell souvenirs.

"The welcome center will be right next door," Major said. "We're so excited about moving downtown and being part of Argenta. Argenta is the front porch of North Little Rock. People can stop in our new building and get information about the city if they're a visitor, but somebody who lives here might want to send a friend a T-shirt, or a coffee cup, from North Little Rock.

"In general, it's a new and different way to advertise and promote North Little Rock."

The Visitors Center, not far off the Burns Park exit from Interstate 40, serves about 10,000 visitors each year, according to the bureau. Almost three-quarters of hotel guests in North Little Rock traveled to the city by personal automobile, according to market research done for the bureau.

With the new Visitors Center to be in downtown, more visitors will be coming off of Interstate 30, instead of I-40, possibly changing who stops by and why. The new center also will be nearer attractions such as the Old Mill, Arkansas Inland Maritime Museum, Simmons Bank Arena, the Arkansas River Trail, Dickey-Stephens Park baseball stadium and, across the Arkansas River in Little Rock, the River Market District, the Clinton Presidential Center and the Statehouse Convention Center.

"There is going to be a little bit of a learning curve," Slagle said. "We just don't know how many people will come off [I-30 into downtown]. Some of that we'll have to figure out as we go. Our main focus will be servicing the visitors and to make sure they have all the information they need, if they need a hotel or need to know where to eat. That's what we're there for."

Having a downtown Visitors Center also should simplify the bureau's job of trying to persuade tourists to stay, shop, eat or visit an attraction, Slagle said, because they'll already be "right in the middle of things."

"They can feel the activity going on," she said. "I think, from our end, it will be a whole lot easier to direct people."

Argenta Plaza is being counted on by the city to be a destination in itself, especially with the 600 Main office building and the $17 million, five-story First Orion office building under construction directly behind the plaza, supplying a potentially heavy amount of daily users of the plaza's estimated 3,000-person maximum capacity.

While the Northern Lights Festival next month will be a public opening, the entire space won't be ready until the First Orion building is completed early next year.

"We're talking about having more of a ribbon cutting and grand opening of the full plaza, maybe in March or April, when it's warmer and the whole plaza is finished, once we get First Orion built as a backdrop to the plaza," Major said.

The bureau will oversee renting the taxpayer-owned plaza for private events, such as receptions, fundraisers or weddings, but its primary intended purpose will be for the public to enjoy, Major said.

"The key is not renting it all the time, but keeping it open all the time for the public, for people to say 'Let's go down to the plaza,'" Major said.