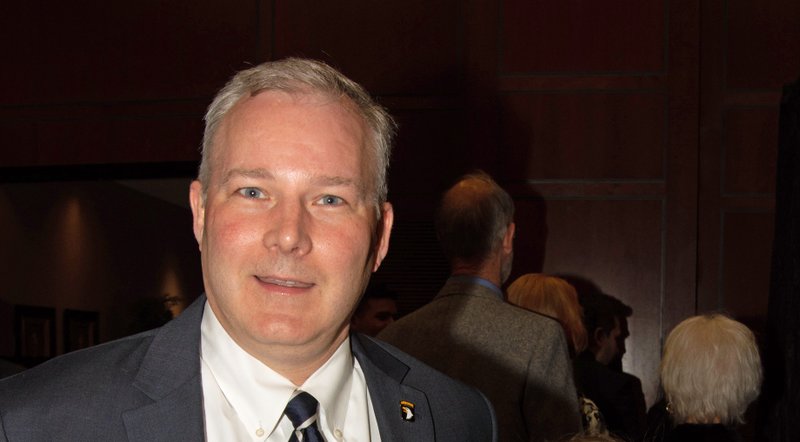 The 30-second ad will air about two months after the Little Rock Republican said he will be a candidate for governor in the 2022 election to succeed term-limited Republican Gov. Asa Hutchinson.

He said he has made it clear that "I cannot be an official candidate until May 2020 under state law."

Griffin's potential Republican rivals for governor in 2022 include former White House press secretary Sarah Huckabee Sanders, who is now a Fox News contributor and whose father is former Gov. Mike Huckabee; Senate President Pro Tempore Jim Hendren of Sulphur Springs, whose uncle is Hutchinson; and Attorney General Leslie Rutledge, who served a stint as an aide to Huckabee.

Arkansas Competes is a 501 (c) (4) issue advocacy group and its directors include Ryan Holder of Little Rock and Carl Vogelpohl, according to Vogelpohl. Vogelpohl is a former chief of staff to Griffin when Griffin served in Congress and to Rutledge in the attorney general's office. Vogelpohl has worked in campaigns for both of them.

When asked who is financing the group, Vogelpohl said Arkansans financially support Arkansas Competes, subject to the rules governing 501 (c) (4) groups. The group's 501 (c) (4) designation became effective Jan. 28 of this year, he said.

"Arkansas Competes will lead the conversation on issues important to all Arkansans," the group's chairman, Madison Murphy, said in a news release. "I am excited to be working with Lt. Gov. Tim Griffin and Arkansas Competes to advocate for lower taxes, leaner government and world-class education, ingredients necessary if we are to grow jobs and compete globally."

Murphy of El Dorado is chairman of the board for Murphy USA Inc. Murphy USA operates more than 1,470 retail gas stations in 26 U.S. states under its brands, Murphy USA and Murphy Express, according to its website.

Appearing in the ad holding a football, Griffin says STEM education, lower taxes, and leaner and smarter government are essential to grow good-paying jobs. He urges people to support Arkansas Competes. Vogelpohl provided a copy of the ad to this newspaper Thursday. STEM stands for science, technology, engineering and mathematics.

"We will have a robust buy that will help us deliver our message statewide to Arkansans who care about these issues," Vogelpohl said when asked whether the ad would air statewide or in a regional market. He declined to provide details such as the cost of the ad buy.

Griffin said he is participating in the ads because "I have long believed we need to communicate on issues important to Arkansans year round, and this is an opportunity to do that.

"For years, I have encouraged Arkansans to speak out on issues through this sort of group, and finally we have one," he said in a written statement.

The 8th U.S. Circuit Court of Appeals at St. Louis is considering an appeal of a federal judge's ruling regarding an Arkansas law that prohibits candidates for statewide office from accepting campaign contributions more than two years before an election.

The next primary for governor will be May 2022.

On June 17, U.S. District Judge James Moody Jr. granted a preliminary injunction to prevent the law's implementation until its constitutionality is decided. However, Moody stayed the order two days later, at the state's request, allowing the blackout period that has been in effect since 1996 to continue being enforced while the 8th Circuit considers the appeal.

Vogelpohl said this Arkansas Competes ad wouldn't run afoul of state law with Griffin, an announced candidate for governor, because "issue advocacy is protected by the First Amendment to the U.S. Constitution and applies to all Americans, elected or not."

He also referred to an Arkansas Ethics Commission advisory opinion, issued on Oct. 19, 2018, to attorney Bob R. Brooks Jr. of Little Rock, as well as a letter dated Jan. 29, 2015, from commission Director Graham Sloan in which the commission dismissed an ethics complaint filed against Rutledge regarding a 527 group. A 527 group is a type of U.S. tax-exempt organization created primarily to influence the selection, nomination, election, appointment or defeat of candidates to federal, state or local public office.

"Note that Arkansas Competes is a 501 (c) (4), and not a 527, but the Ethics Commission addresses the issue of coordination in that case," Vogelpohl said in a written statement in response to questions posed by this newspaper.

In the commission's advisory opinion to Brooks, the commission said if a non-candidate committee organized under federal law as a 501 (c) (4) runs issue ads in Arkansas not asking for votes for or against a specific candidate, the committee's activity wouldn't constitute a contribution or non-monetary contribution under state law.

"Assuming the ads were issue speech paid for by the committee, current Arkansas law does not demand that it automatically be considered a contribution subject to reporting by a candidate," the commission opined.

"If it is not a contribution, then the current $2,700 per election contribution limit would not be applicable," according to the commission's 2018 opinion.

In January 2015, the commission dismissed an ethics complaint filed against Rutledge by attorney and political blogger Matt Campbell about $300,000 in advertising that featured Rutledge, but was paid for by the national Republican Attorneys General Association.

Arkansas laws didn't require the ads to be counted as campaign contributions -- subject to the then-$2,000 per candidate limits -- because the ads didn't expressly ask listeners to vote for Rutledge, the commission said. Such ads often ask listeners to call the candidate and voice their approval, or call the opponent and voice their criticism over a particular issue.

In the 2015 regular session, state Rep. Clarke Tucker, D-Little Rock, won the House's approval for his legislation that aimed to end unfettered spending by outside groups by making "coordinated" campaign ads. He proposed that the efforts directly involving a candidate should count as campaign contributions and be subject to state limits. But the bill failed to clear the Senate.

That bill would have addressed the campaign ad paid for by the Republican Attorneys General Association in which Rutledge appeared on camera and told voters to support her in her fight against government intrusion from Washington, D.C. That legislation would have allowed coordinated ads like Rutledge's to run, but they would have faced the then-$2,000 contribution per election limits.

Griffin has served as lieutenant governor since 2015 and was re-elected to his second four-year term in the post in November 2018. He was Arkansas' 2nd District congressman from 2011-15. He is a colonel in the U.S. Army Reserves and is a former aide to then-President George W. Bush and a former interim U.S. attorney.

Asked how often Arkansas Competes will be financing ads in which the lieutenant governor appears, Vogelpohl said, "Those decisions will be made depending on the issue, but Lt. Gov. Griffin is an excellent spokesperson and we hope to use him as much as he is willing."