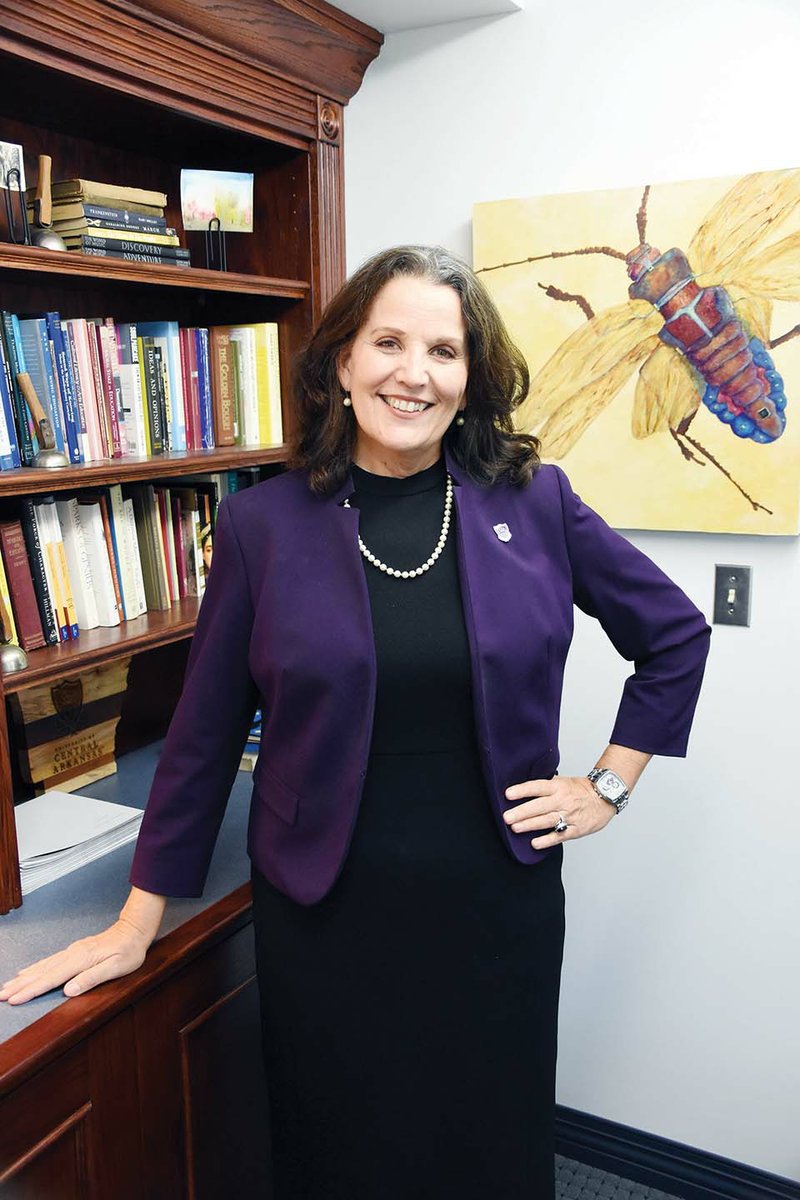 Patty Poulter, provost and executive vice president of academic affairs at the University of Central Arkansas in Conway, stands in her office in front of artwork created by her daughter Annie Cunningham. Poulter, 60, started in the position in July 2018. In July this year, she was diagnosed with two kinds of breast cancer. She said the Conway and UCA communities have been caring and supportive. “I love it here,”she said.

Patty Poulter said she believes life is all about saying yes.

That attitude led her to the University of Central Arkansas in Conway as the first female provost and executive vice president of academic affairs.

“Saying yes to everything along the way has led me to being in the best place I could be,” she said, sitting in her campus office surrounded by original artwork and photographs of her two daughters and two young grandsons.

The 60-year-old Illinois native is just over a year into the position that she specifically applied for because of what she knew about UCA’s president, Houston Davis, and about Walnut Ridge, where her father grew up.

Poulter came to UCA from Kennesaw State University in Georgia, where she served as dean of the College of the Arts. Davis was interim president of Kennesaw State before he was hired at UCA.

Conway is also the best place to be, Poulter said, because of something unexpected — a breast-cancer diagnosis.

She was diagnosed with cancer July 3 after her annual mammogram.

“It’s mammo day — thumbs up,” she said, smiling big and re-enacting how she posed in her selfie.

It took three hours for all the rechecking; then the radiologist came out to talk to her.

She has invasive lobular carcinoma, which represents 10 percent of breast cancer, according to breastcancer.org, and also invasive ductal carcinoma, “the most common,” she said.

“It wasn’t what I expected to hear,” she said. She underwent two lumpectomies, the second on Sept. 11.

Her radiation treatments will start in a few days and last just under five weeks.

“My prognosis is outstanding,” she said.

Poulter praised the Conway Regional Medical Center staff, adding that her Little Rock and Conway doctors are “the dream team.”

“I don’t believe in predestination,” she said, shaking her head, “but whenever we say yes to things, it puts us right where we need to be. By saying yes to this job, it put me where I need to be to have amazing co-workers and friends, wonderful doctors. I have two aunts who are nurses, one in Jonesboro and one in Hot Springs.”

Those women helped care for her after the surgeries, she said.

“I’m here at a smaller university that’s in a different kind of caring community,” she said.

Poulter said her neighborhood in Georgia had 1,500 houses in the subdivision.

“I had to use GPS to get out of my subdivision,” she said, laughing.

Even though Houston Davis had been interim president at Kennesaw before being hired at UCA, they only met once, she said.

Poulter said she doesn’t apply for everything that comes along.

“It’s about who can I serve?”Poulter said. “What can I learn from the person I’m working for? … Houston’s reputation as a person of integrity and brilliance — he’s not just intelligent, he’s a brilliant person — and discernment — he has great discernment — when I saw he was here, him choosing this place and this place choosing him told me a lot about it.”

UCA’s values align with hers, she said, especially the focus on improving the lives of first-generation college students. Thirty percent of UCA’s students are the first in their families to attend college.

“All the things about UCA resonated with me,” she said.

Poulter’s father, the late Lloyd Gaines, grew up in Walnut Ridge in Lawrence County, as did generations of his family. He didn’t finish the sixth grade, but Poulter said, “He was so smart,” as were other relatives who didn’t attend college. Her father and his brothers moved north in the 1950s to find jobs, and she grew up in Winnebago, Illinois, with two older sisters and a younger brother.

Each December, they’d visit Poulter’s grandparents and relatives in Arkansas.

“Every Christmas night, we loaded up into the station wagon and drove all night [to Walnut Ridge],” she said.

“What I remember the most is they would all go rabbit hunting … my dad, my uncle, my grandpa, brother Bob, the minister. … They’d get the beagles, and [the men would] all have on these coveralls. And my grandma made the biscuits and gravy. She made the best biscuits and gravy,” Poulter said.

“We joke that our family crest should be a fork and a guitar, because we love food and music,” she said. “My memories of Arkansas and Walnut Ridge — it was a house full of people, a house full of music and stories.

“I always loved music. My earliest memory is standing with my ear on Dad’s guitar, and I have it now.”

In addition to the guitar, Poulter plays ukulele and piano. She said she started taking piano lessons at 4 or 5 years old.

When she moved to Conway, she gave her piano to a former student who is teaching in a high-needs school.

“I figured she needed it more than I did,” Poulter said. “If I had one, I’d play it every day.

Poulter’s plan is to buy a piano when she finishes her radiation treatments.

Being raised in a musical family set the stage for her career, and so did music teacher Dixie Leden at Poulter’s school in Winnebago,” she said.

“I was in second grade in music class, and it dawned on me, ‘You can do this for a job.’ I didn’t know how to get there — I was 7 — but music is the way I knew the world and lived,” Poulter said.

And she knew Mrs. Leden believed in her.

“I think our lives are about saying yes and listening to what that voice of possibility is,” Poulter said. “That does not guide just my decisions, but how I try to encourage others. I’ll meet people and students and say, ‘What’s possible today? What’s possible today?’ I believe that frames the way we look at our choices.”

Poulter was the first in her family to graduate from college. She earned a bachelor’s degree in music education and a master’s in choral conducting from Eastern Illinois University in Charleston.

When she graduated with her degree in music education, Poulter sent roses to her former music teacher.

Leden, who still lives in Winnebago, was a general music teacher and choir director.

“She sort of went in the same footsteps as mine, and I think she got further,” Leden said of Poulter. “She was a very natural musician and such a willing and able person. I was so proud of her — one of my outstanding students in Winnebago.”

Poulter was a public-school music teacher in Illinois and Minnesota for almost 10 years before she decided she wanted to “teach people how to be teachers.” She earned a doctorate in music from the University of Illinois at Urbana-Champaign.

She was a professor of music education at Eastern Illinois and sang professionally with a seven-voice group, Choragos. They sang 15th- and 16th-century music.

“I was able to travel around the world,” she said. Poulter was also a professional conductor of choirs and chamber orchestras.

When she got into administration, she didn’t have time to travel.

“The provost is the person who helps set academic vision and mission,” Poulter said.

She didn’t realize she was the first female provost until someone pointed it out to her.

“What I think is especially important is, the more students can see themselves in faculty, in business leaders, in leadership, wherever those roles might be — if they see people who look like them, it helps them envision themselves there,” she said.

Poulter, who is reluctant to toot her own horn, said the most significant accomplishment she’s implemented since coming to UCA has been to bring together enrollment services under one person, Associate Vice President for Enrollment Management Kevin Thomas, who started in the position July 1. Prior to that, all the areas under enrollment services — admissions, recruitment, financial aid, the registrar’s office and academic advising — reported to different people.

“We need to bring all these folks together if we want students to succeed,” she said.

Poulter also made a $25,000 personal commitment to help students succeed by establishing the Lloyd and Vivian Gaines Scholarship in honor of her parents. Her 85-year-old mother still lives in Illinois and is active in her community. Poulter’s father started a bluegrass festival 36 years ago, she said, and her mother has been running it since her father died in

The scholarship will be awarded to first-generation students, with a preference given to those from Lawrence County.

“There are brilliant people all over this state who need a little leg up,” Poulter said.

Poulter’s goals for UCA include that it “continue to be a place that matters and that really revolves around student success,” she said. “I’m humbled to be here and help faculty and staff be the best they can.”

Poulter said her cancer treatment is expected to cause fatigue, but it will not stop her.

“If anything, I feel I should be here doing my work,” she said, with a clap of her hands for emphasis. “People care for me and want me to do well.”

And when she said yes to the job, she meant it.