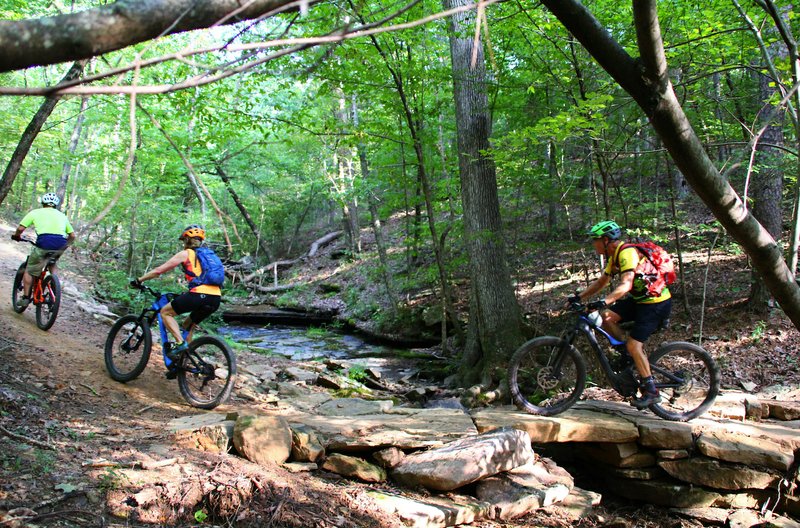 Arkansans already are enjoying the benefits of what has been described by Arkansas State Parks officials as the largest trail-construction project in the parks' history since the Civilian Conservation Corps built the first park trails in the 1930s and '40s.

The project is a group of soft-surface, multi-use trails built with cycling in mind but attractive to runners and hikers, too. They are called Monument Trails, and they are, or will be, in four state parks using private money and grants. 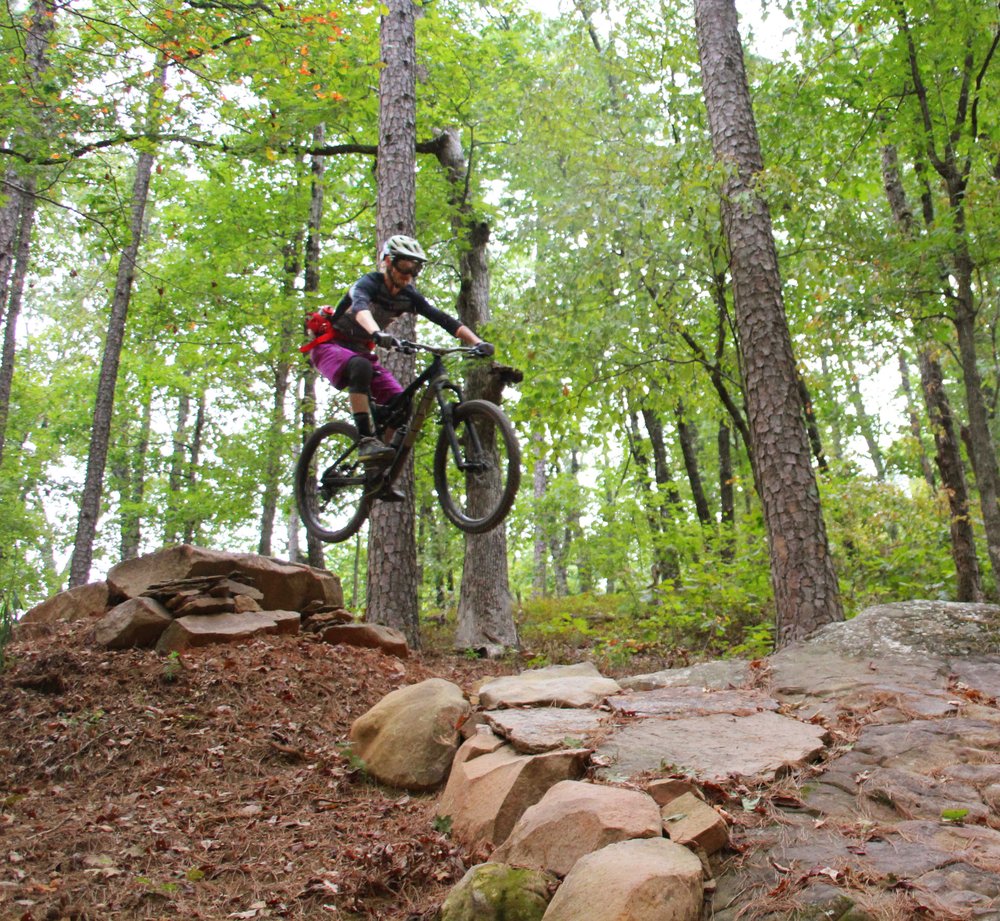 This is the work of the Arkansas Parks & Recreation Foundation, with Little Rock lawyer John Gill as founding board chairman. The foundation is a 501(c)(3) nonprofit with a mission to support, protect and add value to places that provide exceptional recreation experience across the state.

"Until now, there hasn't been an effective way to channel private resources into our parks for worthy projects," Gill said.

Other states have similar organizations, but until the foundation formed, Arkansas did not possess a philanthropy conduit through which the private sector could funnel support for park trail construction. To jumpstart the new organization, the Walton Family Foundation provided a three-year, $310,000 grant, earmarked for new infrastructure projects, upgrades to existing facilities, and maintaining outdoor offerings.

Working with state park representatives such as Grady Spann, Arkansas Parks director, the foundation set out to create multi-use, unpaved paths that would be an effective way to expose visitors to nature. The trails would be designed with an emphasis on cycling, but they would differ from many other mountain bike trails found throughout the state.

Suzanne Grobmyer, Arkansas Parks & Recreation Foundation executive director, explained, "We do want to encourage visitors to not just ride the trail, but to take in everything natural the area offers."

They should be at least 10 miles long and designed to last a long time without a lot of maintenance. They should include a kid-friendly campground loop, and each mile should be a meaningful experience. (See related story.)

With an extensive history of support for bike trails in Northwest Arkansas, the Walton Family Foundation was the first private donor to support this new endeavor.

"Trails are a signature characteristic of the quality of life in Northwest Arkansas and an economic engine for tourism in the region," said Tom Walton, the foundation's Home Region Committee chairman.

The family foundation contributed a $2 million dollar grant toward development of the state's first Monument Trail, at Hobbs State Park-Conservation Area at Rogers. Phil Penny, owner of Rogue Trails construction, was selected to design and build the trail. Penny has a bachelor's degree in environmental science and engineering and nine years of experience gained working in hydrology with the Arkansas Game and Fish Commission.

As riders leave the parking lot of Hobbs State Park Visitor Center, the trail routes them through dense pine forest on a gently rolling, groomed path that is suitable for entry-level riders.

Enroute to a tunnel, which provides safe passage under Arkansas 12, more experienced cyclists have the option to choose a fast and steep downhill path, with potential for a little "airtime," descending the ridge by way of two different one-way routes. Sawtooth and Timberjack Trails are filled with fun rollers, twists and turns sure to satisfy adrenaline junkies' needs.

As riders exit the tunnel on the other side of the highway, they follow Wolf Den Loop for a gentle, flowy descent off the ridge top. As the wide, groomed trail winds in and around its drainages, Penny and his crew assimilate the hillside into the flow to provide tall, natural earthen berms that allow riders to glide through turns without using momentum-killing brakes.

Halfway through this first loop, the trail crosses a connector to Karst Loop, which, flowing alongside the lakeshore and past beautiful bluffs, is the most scenic path in the system. 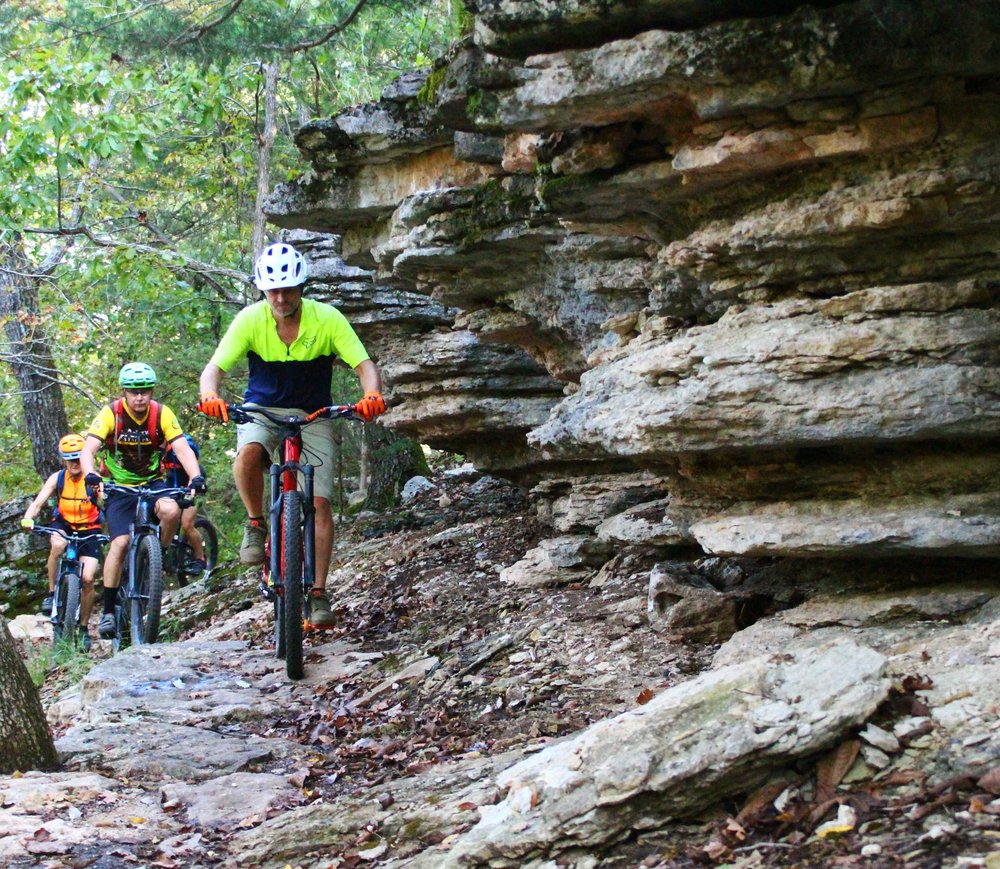 These karst rock formations are an example of nature's art and the Arkansas Parks & Recreation Foundation wants visitors to see it. Without the trail, only a small number of visitors to the park would have the opportunity.

The Hobbs Monument Trail opened to the public in June. While camping recently in Northwest Arkansas, I met cyclists from Colorado, Kansas, Missouri and other states who already had the Hobbs trail on their to-do list.

In addition to the 18 miles of new trail already open, Rogue Trails will add a hike/bike into the campground, for those wishing to extend their Monumental experience into the night.

Concurrent with construction of the Hobbs trails, a second Monument Trail was built at Mount Nebo State Park.

In keeping with Arkansas Parks & Recreation Foundation's plan that each trail should highlight unique qualities of its particular park, and with Mount Nebo's outstanding feature being elevation, the Chickalah Loop features a long, sweeping, downhill thrill ride.

A grant provided to Arkansas Parks & Recreation Foundation by the Walton Family Foundation at the recommendation of Tom and Steuart Walton in the amount of $519,000 supported construction of the first phase at Mount Nebo. Aaron Rogers' Rock Solid Trail Contracting built Phase I. (They also constructed the Lake Leatherwood Gravity Trail Project near Eureka Springs.)

Chickalah (pronounced chuh-kEE-luh) Loop is steep and fast, scattered with small kickers that are fun for intermediate riders and black diamond jumps that will challenge even the high fliers. However, each of the jumps includes ride-arounds for those who prefer to keep the rubber on the ground.

High earthen berms allow riders to glide through the hairpin turns with ease and speed. In keeping with Arkansas Parks & Recreation Foundation's emphasis on natural art, Rogers built rock features that are works of art in themselves. Made using stones from the area, they invite riders to pause to admire and take selfies.

The seven-mile Chickalah Loop opened to the public July 27, as Phase I. In a news release, park Superintendent Scott Waniewski said, "These 7 miles of new trail will allow our visitors to see some beautiful parts of the park that were never before accessible. Cyclists are encouraged to park at the Bench Trail Overlook, just below the top of the mountain on Arkansas 155, to access the trails.

"The 4-mile Bench Trail continues to offer novice riders an easy green trail option around the mountain, which has its own beautiful views of the mountain."

Rock Solid is expected to begin Phase II this month, and the work will include 17 additional miles of trail. Phase II has a projected completion date of spring 2020.

In keeping with the Monument Trails criteria for diversity, Phase II will include a large percentage of beginner and intermediate rated trails, with only a few advanced routes sprinkled in to spice things up.

As Grobmyer explained, "I want each Monument Trail to include something for the entire family to enjoy — trails that my young daughter can learn to ride on, plus ones she can enjoy riding throughout her life."

Progressive Trail Design and Rogue Trails are working on designs for a Monument Trail at Devil's Den State Park.

Devil's Den is the birthplace of mountain biking in Arkansas, and Arkansas Parks & Recreation Foundation is making special efforts to pay homage to the work of Assistant Superintendent Tim Scott and other park staff members who traveled to Crested Butte Colorado's Fat Tire Festival in 1988 and applied what they learned there to begin Arkansas' own annual bike festival in 1989.

With the park's current trail system primarily a cross-country design, the foundation plan is to include more diverse trails, with added elevation and rock features. They also want to highlight some of the skillful rock work remaining from the CCC.

There are also designs in the works for a Monument Trail at Pinnacle Mountain State Park. Pinnacle is more of an urban environment and heavily used. Elevation and views are Pinnacle's outstanding features to be highlighted by the trails.

Both of these projects are expected to have shovels in the dirt by the end of 2019, with a completion date the end of 2020. 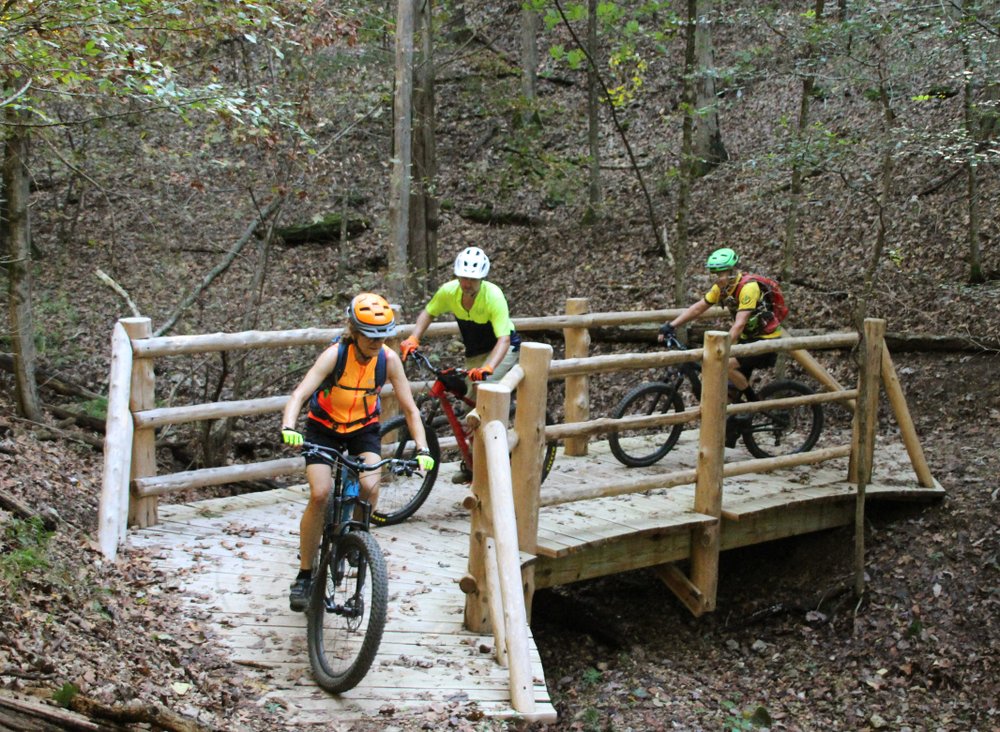 As for what is yet to come, Grobmyer explains, "future projects are completely open, with any and every state park being considered."

In 2017, the Walton Family Foundation, in collaboration with PeopleForBikes and BikeNWA, commissioned BBC Research & Consulting to conduct a study of bicycling behavior and assess the economic and health benefits of bicycling in the region. The study showed bicycling in Northwest Arkansas provides $137 million in benefits to the economy annually.