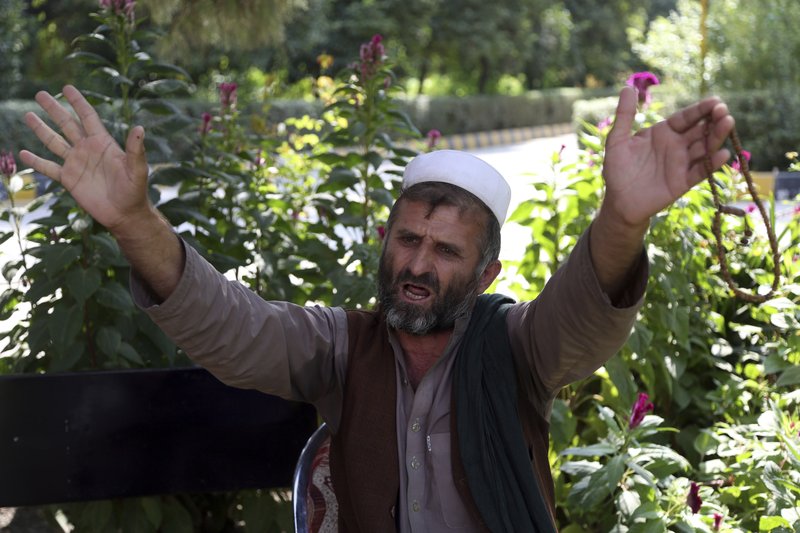 In this Tuesday, Oct. 1, 2019, photo, Mohammad Hasan, who lost seven members of his family, speaks during an interview to the Associated Press in Jalalabad city east of Kabul, Afghanistan, Eighteen years into this war and America would seem to be losing the battle for the &#x201c;hearts and minds,&#x201d; of Afghans as anger mounts over the numbers of civilians killed by U.S. and Afghan. (AP Photo/Rahmat Gul)

JALALABAD, Afghanistan -- Eighteen years into the war in Afghanistan, the U.S. military and its Afghan allies are struggling with how to hunt down the Islamic State extremist group and the Taliban while keeping civilians safe and on their side.

Complaints are growing as more civilian deaths have been linked to stepped-up U.S. airstrikes and operations by Afghan forces. Afghans are also denouncing abuses and killings by a CIA-trained Afghan special intelligence force known as Unit 02.

Overall, civilian deaths are down so far this year, and they are on track to the lowest number since 2012. But civilian deaths caused by U.S. and Afghan government forces are rising, surpassing for the first time those caused by the Taliban and other insurgents, according to a United Nations report.

Some 16,000 civilians have been killed in the war since 2009, according to the United Nations.

Former President Hamid Karzai, in a recent interview with The Associated Press, said he didn't want the U.S. troops for "one more minute" if deaths of civilians continued.

Michael Kugelman, deputy director of the Asia Program at the Washington-based Wilson Center, blamed the increase in civilian casualties on U.S. President Donald Trump, saying his administration has sought to ramp up pressure on the battlefield and has loosened rules of engagement for U.S. forces.

"In effect, the Trump administration has given its blessing to U.S. forces to use a more gloves-off approach on the battlefield that raises the risk of civilian casualties," he said.

Last week, Defense Secretary Mark Esper said: "We did step up our attacks on the Taliban since the talks broke down... we did pick up the pace considerably."

According to the U.S. Air Forces Central Command, the U.S. conducted more bombings and drone strikes in Afghanistan in August than in any previous month this year -- 783, compared with 613 in July and 441 in June.

Despite the increase in bombings and drone strikes, U.S. enemies are not weakening, according to a U.S. Department of Defense intelligence agent who spoke on condition of anonymity because of the sensitivity of his work. He said the Taliban, the former rulers of much of Afghanistan, are stronger than they have been since their ouster in 2001 , and that the Islamic State is moving into the mountains of the northeast.

The U.N. report of casualties has been criticized. In an interview with The Associated Press, Afghan Defense Minister Asadullah Khaled disputed the report, saying "we do not have a lot of civilian casualties." He accused the Taliban and their sympathizers of inflating numbers.

It's not just the U.S. air raids that are angering Afghans.

President Ashraf Ghani fired his intelligence chief, Masoom Stanikzai, last month after complaints from Afghans and the United Nations about widespread abuses by the CIA-trained Unit 02. As early as last year, the U.N. asked the government to implement more oversight over the unit.

The firing came after members of the unit raided a home in Jalalabad, just yards from the Justice Ministry, and killed four brothers. Family members showed the AP photos of the bodies, bound and shot in the head. One of the brothers was an assistant to a close ally of Ghani. Their uncle, Ibrahim Malikzada, said Unit 02's soldiers also took cash and jewelry.

The Unit reported that the dead were insurgents, a claim denied by the family. Eight others were arrested in the raid and later released.