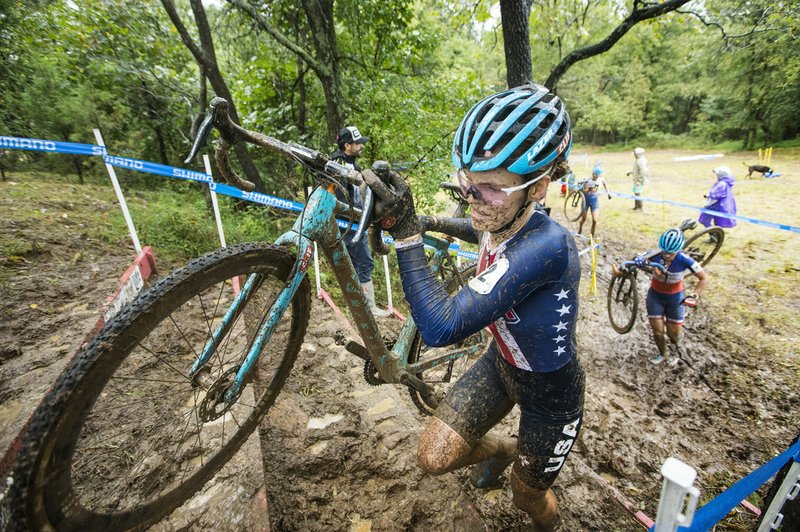 NWA Democrat-Gazette/BEN GOFF @NWABENGOFF Clara Honsinger of the United States climbs a stair obstacle while racing in the UCI Elite Women race Sunday, Oct. 6, 2019, during the the Fayettecross cyclocross races at Centennial Park at Millsap Mountain in Fayetteville. Honsinger won the race.

Wheels were spinning and mud was flying atop Millsap Mountain in Fayetteville on Sunday, thanks to nearly 10 inches of rain and a soggy course, on the final day of FayetteCross.

The debut event for cyclocross racing in Northwest Arkansas was an overall success, according the race director Brook Watts, who was thrilled to see fans come out in a myriad of weather conditions this weekend.

"Of course, a lot of people were out here on Saturday when the weather was nice and sunny," he said. "But they are not fairweather fans, because today they were out here in the rain, and we had a lot of rain. It did make for some interesting and entertaining racing."

Watts estimated that approximately 1,000 spectators were on hand Saturday, and that another 500 braved the weather on Sunday.

"I think it proved that Fayetteville loves cyclocross, rain or shine," he added. "I can't wait to see what the future holds for us here."

Cyclocross is a hybrid, rugged-brand of off-road competitive cycling. Fayetteville has recently been chosen to host the 2022 World Cyclocross Championships, an international event that will take place at Centennial Park, the same location as this past weekend's two days of racing.

"We are extremely happy with the way this went this weekend, really better than we thought from a participation aspect," said Watts, who has been involved in cyclocross for more than 40 years, and currently serves on the Board of Directors at USA Cycling and the Cyclocross Commission of the UCI International Federation. "It all starts with having a good race, with good racers, and a good course like we have here. It will just explode from there."

Oregon racer Clara Honsinger won the women's Elite race on Sunday, after a third-place finish on Saturday. She crossed the finish line in her mud-clad USA Cycling attire as a member of the national developmental team.

She is already looking forward to return to Fayetteville in two years to compete in the World Championships.

"I thought the entire weekend was excellent," the 22-year-old Honsinger said. "I just wanted to come here and get an idea of what the course is like, as well as what the town of Fayetteville is like. So far, I've been really impressed."

She had to hold off French national champion Caroline Mani on Sunday, maneuvering through the muck and winning by just 20 seconds. Mani actually finished second on both days of racing.

"I'm from the Pacific Northwest, where it rains a lot, but I don't think I've ever seen this much rain before," Honsinger added with a chuckle. "It was all about keeping your momentum moving forward through the mud today, trying to steer straight with a little power behind it.

The track is 1.75 miles and includes barriers that the riders must maneuver, as well as a flight of stairs that requires riders to dismount and carry their bikes. It also offers three sections through the woods and various surfaces of grass, gravel and dirt.

Construction will begin this winter to begin transforming Centennial Park into a premier cycling facility, in preparation for the 2022 Championships.

USA Cyclocross team manger Jesse Anthony was on hand this weekend, not only to watch his sister, Crystal, compete in the Women's Elite races, but also to get an idea what the facility has to offer from a national perspective.

"This event has been amazing, the atmosphere is awesome," said Anthony, who has been to Fayetteville in the past to compete in the Joe Martin Stage Races. "I think it turned out being a lot bigger than what they expected for the first year. People are stoked. It's super fun to be here."

"For us, it's great to see another region where cycling is growing a lot, and it's great to see how much the community has gotten involved and gotten behind this. That's what we really love. It's just the beginning of a journey for us."