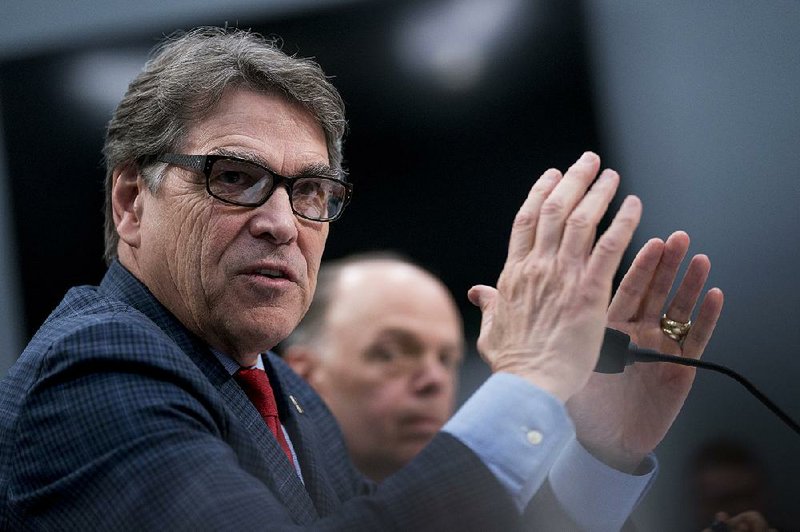 WASHINGTON -- The legal team representing the whistleblower whose complaint set off an impeachment inquiry of President Donald Trump is now representing a second whistleblower -- one with "firsthand knowledge" of key events, the individual's lawyer said Sunday.

The announcement came as a spokeswoman for Energy Secretary Rick Perry addressed his role in the telephone call at the center of the impeachment probe, and as Republicans, including the president, criticized Democrats for accelerating their impeachment inquiry.

Zaid confirmed a report by ABC News anchor George Stephanopoulos on his show, This Week, that the new whistleblower had already been interviewed by the office of the intelligence community's inspector general but had not yet communicated with any congressional committees.

The first whistleblower, a CIA officer who was detailed to the National Security Council, filed a complaint in August accusing Trump of using his power to push Ukraine to investigate his domestic political rivals. The complaint referred to a July 25 phone call with President Volodymyr Zelenskiy of Ukraine.

Trump has tried to undermine the credibility of the first whistleblower, whose identity is not publicly known, by saying that the individual provided only secondhand information. On Sunday, White House officials said information from a second whistleblower would make no difference.

"It doesn't matter how many people decide to call themselves whistleblowers about the same telephone call -- a call the president already made public -- it doesn't change the fact that he has done nothing wrong," said Stephanie Grisham, the White House press secretary.

Trump on Sunday tried to tie both whistleblowers to former President Barack Obama and former Secretary of State Hillary Clinton, his opponent in the 2016 presidential election.

"Democrat lawyer is same for both Whistleblowers? All support Obama and Crooked Hillary," he tweeted, adding, "Witch Hunt!"

Trump's personal lawyer, Rudy Giuliani, framed the news of the new whistleblower on Sunday as a political hit on the president. He added on Twitter that the bottom line was that there was "no quid pro quo" attached to Trump's pressure on Ukrainian officials to investigate his political rivals.

Perry did encourage Trump to speak to Ukraine's president -- but about energy and economic issues, Perry's spokeswoman said Sunday.

"Secretary Perry absolutely supported and encouraged the president to speak to the new president of Ukraine to discuss matters related to their energy security and economic development," Perry's Energy Department spokeswoman, Shaylyn Hynes, said in an email.

Trump on Friday evening told House Republicans that it was Perry who had teed up the July call with the Ukrainian leader, according to a person familiar with Trump's comments who was granted anonymity to discuss the private conference call.

Perry, a former Texas governor, has made repeated trips to Ukraine and met often with Ukranian officials, including Zelenskiy. Perry and his agency say his involvement with Ukraine was part of U.S. policy, predating the Trump administration, to increase U.S. natural gas, coal and other supplies to Eastern Europe to lessen Russia's control of the region's energy market.

Perry was heading to Lithuania on Sunday night, and he plans to meet this week with nearly two dozen European energy officials, including those from Ukraine, Hynes said.

Perry had previously met with Zelenskiy in May, when he pressed the Ukrainian leader to fire members of the advisory board for Naftogaz, the state gas company, four sources told The Associated Press. Three of the four spoke on condition of anonymity. The fourth is an American businessman with close ties to the Ukrainian energy sector.

Attendees left the Kiev meeting with the impression that Perry wanted to replace the American representative to Naftogaz -- Amos Hochstein, a former diplomat and energy representative who served in Obama's administration -- with someone "reputable in Republican circles," according to someone who was in the room.

A person who also attended a later meeting at a Kiev hotel said Perry made clear that the Trump administration wanted to see the entire Naftogaz supervisory board replaced, and he suggested two Texans for posts. Biden's son, Hunter, served five years on the board of a different Ukrainian energy company, Burisma.

The conversations came months after businessmen claiming ties to Giuliani and Trump attempted to persuade Zelenskiy's predecessor, then-President Petro Poroshenko, to install new management at Naftogaz. It is unclear if the efforts are connected, and no one has alleged any criminal activity in any of these efforts.

But Ukrainian officials perceived Perry's push to swap out the board as circumventing the established process, according to the person in the room. The Naftogaz supervisory board is supposed to be selected by the Ukrainian president's Cabinet in consultation with parties including the International Monetary Fund, the United States and the European Union.

On Saturday, Hynes said Perry has consistently called for Ukraine to create incentives for Western companies to do business there.

"What he did not do is advocate for the business interests of any one individual or company," Hynes said. "That is fiction being pushed by those who are disingenuously seeking to advance a nefarious narrative that does not exist."

Trump allies who made public comments Sunday generally focused on criticizing Democrats' handling of the case.

Rep. Chris Stewart, R-Utah, a member of the House Intelligence Committee, said on Fox News Sunday that he was "not at all" concerned by the emergence of another whistleblower because he had already seen a transcript of Trump's July call and did not consider it to be problematic.

On This Week, Rep. Jim Jordan of Ohio said the president was merely interested in rooting out legitimate accusations of corruption and that Democrats were unfairly vilifying him for it.

He told Stephanopoulos that Trump's public remarks last week calling on China to investigate the Bidens was a joke.

"George, you really think he was serious? ... I think he's getting the press all spun up about this," Jordan said. "I don't think he really meant 'go investigate.' Do you think China is really going to investigate?"

Sen. Ron Johnson, R-Wis., said on NBC's Meet the Press that Trump had "vehemently, angrily denied" to him the accusation that he had withheld aid for Ukraine in exchange for investigations of his political rivals.

Johnson said Trump wants "an accounting of what happened in 2016," referring to the investigation of whether the Trump campaign had ties to Russian election meddling.

"You're making a choice not to believe the investigations that have taken place," Todd replied.

Sen. Lindsey Graham, R-S.C., said there was nothing wrong with Trump's July conversation with Zelenskiy and that the accusations look like a "political setup."

Democrats, meanwhile, sought to portray the accumulation of evidence against the president as inevitable.

"The president's real problem is that his behavior has finally gotten to a place where people are saying, 'Enough,'" said Rep. Jim Himes, D-Conn., a member of the House Intelligence Committee.