No ruling for block of state's label law 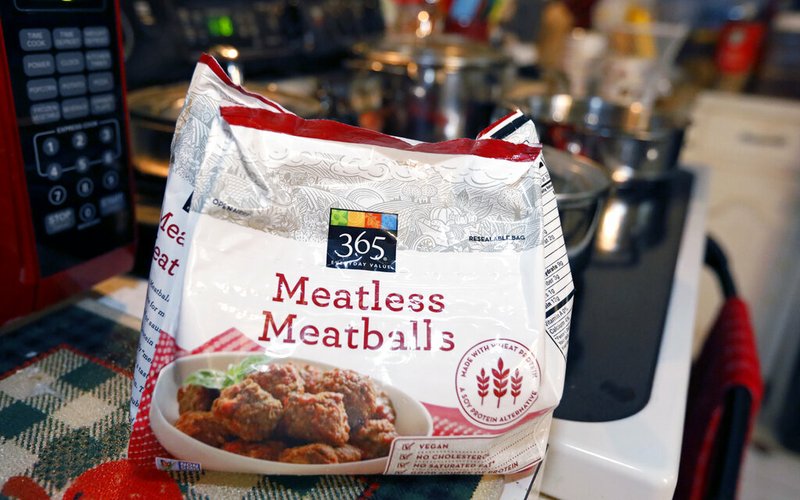 A federal lawsuit says Mississippi is violating free-speech rights by banning makers of plant-based foods from using terms such as "meatless meatballs," "vegan bacon," "beefless burger" or "beefless tips," as displayed in a Jackson, Miss., home, Tuesday, July 2, 2019. The lawsuit was filed Monday by the Plant Based Foods Association and the Illinois-based Upton's Naturals Co., which makes vegan products and sells them in many states, including Mississippi. It was filed the same day Mississippi enacted a new law that bans plant-based products from being labeled as meat. (AP Photo/Rogelio V. Solis)

A federal judge heard about an hour's worth of arguments Monday on a challenge to a new law concerning the labeling of edible agricultural products in Arkansas.

But U.S. District Judge Kristine Baker didn't issue a ruling on a request by Turtle Island Foods, doing business as The Tofurky Co., to block the law's enforcement while its constitutionality is considered. Baker said she would give attorneys a chance to expand on their arguments in writing before she rules.

At issue is Act 501 of 2019, which was scheduled to go into effect July 24 but isn't currently being enforced due to the company's July 22 lawsuit, which is backed by the American Civil Liberties Union, the Animal Legal Defense Fund and the Good Food Institute.

The lawsuit contends that Act 501 violates the free-speech provisions of the First Amendment by restricting commercial speech that truthfully describes plant-based products, and also violates the due-process provisions of the 14th Amendment. The state counters that Act 501 is a truth-in-labeling law that was designed to protect consumers from being confused by meat-like terminology on packages of plant-based or cell-based food.

"What's really going on here is that the state of Arkansas is seeking to limit access to healthier, more sustainable food choices for its constituents, and it is doing so to benefit the animal agricultural industry," said Jaime Athos, chief executive officer of the Oregon manufacturer of plant-based products that are sold in retail and grocery stores across the country.

Athos, whose affidavit was submitted to Baker in lieu of his testimony, has said Tofurky uses terms like "chorizo," "ham roast," "sausage" and "hot dogs" alongside qualifiers like "all vegan," "plant based" and "vegetarian" to show that the company's products can be served and eaten "just like any other meats."

Assistant Attorney General Jerry Garner reiterated Monday that "this bill is designed to protect the consumer." He said it advances the state's interest in protecting its residentsfrom misrepresentations of non-meat products. He also said that the law's First Amendment restrictions are "no more extensive than necessary" to serve that purpose.

Garner also told Baker that the law was necessary because no other state statutes specifically address the same concerns.

The law allows for fines of up to $1,000 for every plant-based and cell-based meat product, such as "veggie burgers" and "tofu dogs," that is marketed or packaged with a "meat" label. The fines could be imposed even if followed by modifiers such as "vegan," "veggie" or "plant-based."

The ACLU says the law would also apply to "cauliflower rice" and "almond milk," which would be considered mislabeled because they don't contain any actual rice or dairy products.

While Garner argued that there is no threat of harm because the Arkansas Bureau of Standards has decided not to enforce the law yet, Baker asked if that could change at the whim of the bureau director.

Baker said she was also concerned about whether fines would be applied retroactively when the law became enforceable. Garner said the state wouldn't do that.

Attorney Brian Hauss, a staff attorney with the ACLU, told Baker that all of Tofurky's packages contain language disclosing that they are vegan, but the state is essentially saying the disclosures are insufficient.

"The law's stated purpose is to prevent consumer confusion, but there is no evidence in the legislative record that consumers are confused about whether a veggie burger comes from a cow," the plaintiffs argue.

"To the contrary," they argue, "people buy plant-based meats precisely because they are not made from slaughtered animals. Far from preventing consumer confusion, the law is more likely to create consumer confusion by prohibiting companies from continuing to use self-evident terms like 'vegan sausage' to accurately describe the taste, appearance and texture of their products."

The "true purpose" of the law, the plaintiffs contend, "is to benefit the meat industry by censoring the competition."

Print Headline: No ruling for block of state's label law