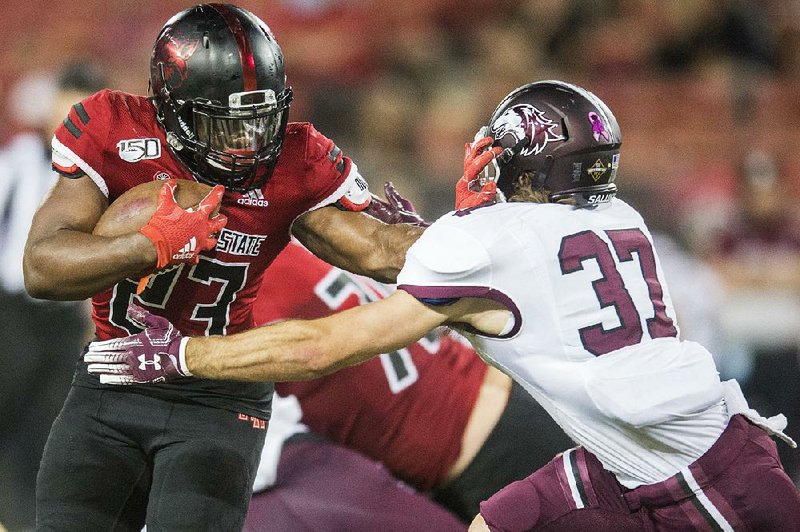 The Red Wolves have lost another member of their backfield for the year.

Azubuike had to be carted off the field with his right ankle in an air cast during the fourth quarter of ASU's 52-38 loss to Georgia State in Atlanta on Saturday. Anderson was non-committal on if Azubuike will be ready in time for spring camp.

"All indications are that he would be full speed by this summer. I don't know that he'll be ready for the spring," Anderson said. "But surgery was needed and some hardware was needed to be put in to hold things together and help him heal properly."

Azubuike, a native of St. Louis, will finish his first season at ASU with 181 rushing yards and no touchdowns. To date, he's tallied the most carries of any running back on the roster this season with 41. Since he played in five games, Azubuike also won't be eligible to gain back a redshirt year.

"We'll obviously miss him the rest of the season," Anderson said. "I thought he was starting to come along and play at a pretty high level for a true freshman."

With Azubuike out, ASU (3-3, 1-1 Sun Belt) has lost three backfield members to season-ending injuries. Junior running back Ryan Graham, who was No. 2 on the depth chart, suffered a torn ACL against Southern Illinois in Week 4, while junior quarterback Logan Bonner started the first four games before he had to have season-ending surgery for a torn ligament in the thumb of his throwing hand.

Anderson also said Monday that sophomore running back Marcel Murray, who started against Georgia State but did not finish the game because of a nagging ankle issue, is expected to be 100 percent for the Red Wolves' next game, a Thursday night matchup Oct. 17 against Louisiana-Lafayette in Jonesboro. ASU has an open date this week.

Murray has been nursing an ankle injury ever since the first half of a 43-17 victory over UNLV on Sept. 7. Prior to Saturday, Murray had played only one play in ASU's previous three games.

"Marcel came out of [Saturday's game] really no worse than he was going in," Anderson said. "He obviously didn't finish, but I would expect him to be full speed when we play [Louisiana] with a week and a half (of rest) under his belt."

On Saturday, Murray finished with six carries for 58 yards and a touchdown.

With Murray struggling to stay healthy, and with Graham and Azubuike both out for the year, junior DJ Chatman should have an even greater workload during the second half of the season.

Senior running back Jamal Jones, a fifth-stringer who played a key role during the 50-43 victory over Troy, missed the Georgia State game because of an injury, but he should also be more of a factor moving forward. Same goes, potentially, for redshirt freshman Donovan Marshall, who like Azubuike attended Lutheran North High School in St. Louis.

Anderson said Monday that senior defensive back Darreon Jackson is away from the team as a result of "off-the-field issues." Jackson did not make the trip Saturday for the Georgia State game, and senior Logan Wescott started in his place at nickel.

Anderson did not indicate when and if Jackson will return this season.

"It really is just kind of day-to-day as to his status and his ability to return," Anderson said.

Jackson was not at practice last Wednesday, and Anderson had said then he was hoping to have Jackson back the next day. Jackson is tied for third on the team in tackles with 35 and has an interception and a half-sack.

The Red Wolves are on a bye this week, and to say it's much-needed and well-timed would be an understatement.

ASU has experienced a wave of key injuries through its first six games on both sides of the ball. Anderson said practice this week will be non-contact.

"We have obviously tried our best to put a competitive group of dudes out there with the bodies that we have, but it's becoming difficult to do as you can see," Anderson said. "They need the time away from contact. We're gonna have to be really smart about how we approach not only the next few days, but honestly the second half of the season to allow guys that are playing more snaps than normal with beat-up bodies to be able to make it through and be effective and more effective than they are right now."

Aside from losing their starting quarterback and now their second- and third-string running backs for the year, the Red Wolves have been hit even harder on defense.

ASU was without four defensive starters on Saturday against Georgia State, as the Red Wolves got manhandled by a Panthers offense that put up a school-record 722 yards, while also tallying 52 points, the most the program has ever scored against an FBS opponent.

Junior cornerback Jerry Jacobs (torn ACL) and junior nose tackle Forrest Merrill (torn bicep) are both out for the season. Senior defensive tackle Kevin Thurmon has missed two consecutive games with a broken hand, but Anderson said there's a chance he could return Oct. 17 against Louisiana-Lafayette.

Lost in the thick of a head-scratching 52-38 loss to Georgia State was the performance of senior punter Cody Grace.

On Monday, Grace earned Sun Belt special teams player of the week honors for his efforts. It was the second consecutive week for Grace to earn the recognition.

Grace averaged 49 yards per punt against Georgia State, with four of his five punts going inside the opposing 20. Two of his punts went for 59 yards, which is his season high.

Grace ranks fifth in the Sun Belt this year, averaging 43.8 yards per punt. He leads the league in punts inside the 20 with 14 and punts of 50 yards or more with 13.