Arrests on border near 1 million for fiscal '19 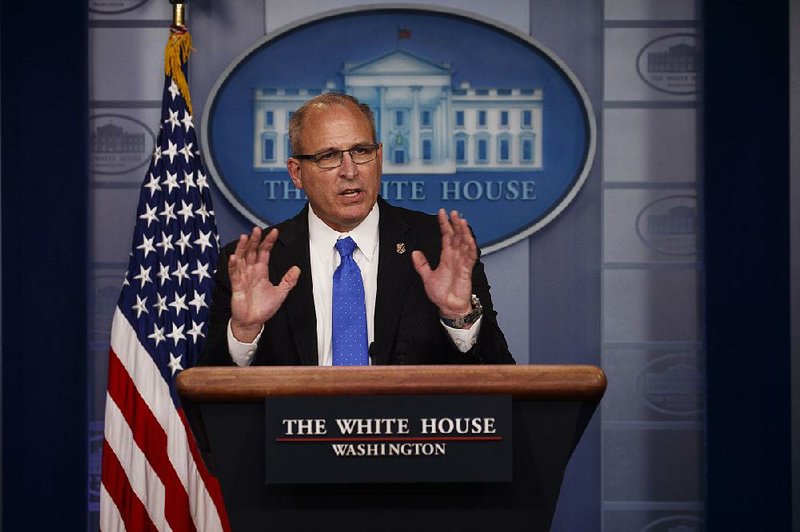 “These are numbers no immigration system in the world is designed to handle,” acting Customs and Border Protection Commissioner Mark Morgan said Tuesday during a briefing at the White House. More photos are available at arkansasonline.com/109briefing/

The number of migrants taken into custody along the U.S. southern border soared to nearly 1 million during the government's fiscal 2019 that ended Sept. 30, according to U.S. Customs and Border Protection data released Tuesday.

The number of unauthorized crossings from Mexico into the United States marked the highest volume in 12 years, amid a record influx of Central American families that peaked during the spring, overwhelming U.S. agents, border stations and immigration courtrooms.

Mark Morgan, the acting Customs and Border Protection commissioner, told reporters at a White House briefing that more than 52,000 migrants were taken into custody in September at U.S. ports of entry and between them, a decline of 18% from August.

[Video not showing up above? Click here to watch ª https://www.youtube.com/watch?v=uPf8CQpdfjM]

"These are numbers no immigration system in the world is designed to handle," he said.

Arrests by U.S. border agents reached an all-time high of 1.6 million in 2000, but Department of Homeland Security officials insist that the migration wave they faced this year is unlike anything in the past.

A generation ago, most of the migrants crossing the border illegally were single adults from Mexico who could be quickly processed and deported.

This year, Central American parents with children became the overwhelming majority of border crossers. Instead of seeking to evade capture, many sought out U.S. agents to surrender and stated a fear of being sent home, the first step in seeking asylum or another form of legal protection in the United States.

Court limits on the amount of time minors can be held in Customs and Border Protection custody mean that nearly any parent who arrived with a child could expect to be issued a notice to appear in court and to be released into the U.S. interior within a few days.

The surge reached its height in May, when more than 144,000 were taken into custody, including one group of 1,036 that crossed the border into El Paso, Texas, to surrender.

After that event, President Donald Trump demanded a crackdown, threatening to impose tariffs on Mexican imports if Mexican authorities did not help to stem the tide.

The government of Andres Manuel Lopez Obrador responded by deploying thousands of national guard troops to clamp down on the Central American migrants, while also allowing the United States to expand a program that requires migrants to wait outside U.S. territory while their legal claims are processed.

The legality of the program is being challenged in federal courts -- a federal appeals court allowed it to continue temporarily while weighing it -- as is a new policy that disqualifies asylum seekers who do not attempt to gain protection in other nations while en route to the U.S. border.

Print Headline: Arrests on border near 1 million for fiscal '19