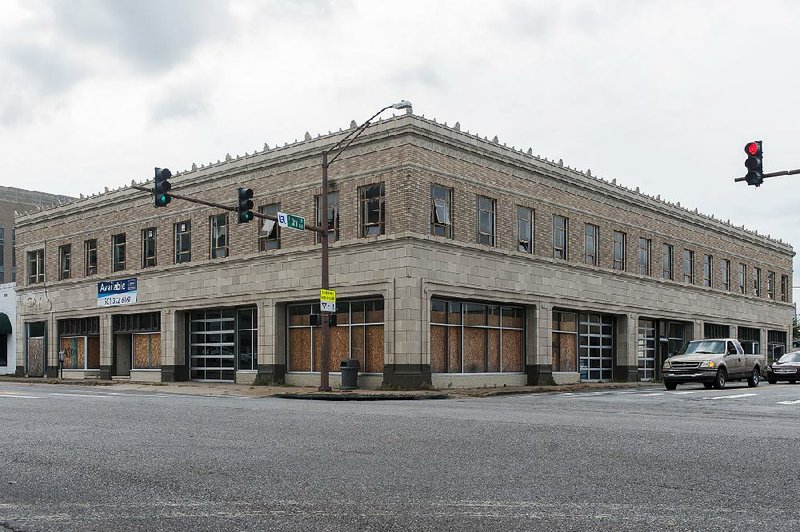 The Gay Oil Co. building at 300 S. Broadway in Little Rock was built in the 1920s and is on the National Register of Historic Places. ( Jeff Gammons)

A sale of a historic downtown Little Rock building to a developer who planned to turn it into a carwash didn't go through Monday, City Manager Bruce Moore said Tuesday.

Plans to raze the Gay Oil Co. building and construct a sleek, modern-style commercial carwash in its place stoked public outcry from preservationists. More than 1,900 people signed an online petition to save the building, and more than 100 comments on Facebook posts from the Quapaw Quarter Association expressed dismay that visitors to downtown Little Rock would see a carwash operating among the historic buildings that include City Hall and the Robinson Center.

The Gay Oil Co. building was constructed in the 1920s and is on the National Register of Historic Places, which deems it architecturally significant as an example of an early 20th century commercial building with neoclassical detailing. The listing, however, is an honorary designation that does not prevent demolition or development.

The property's sale was set to be finalized Monday.

The developer was initially set to go before the Little Rock Planning Commission on Thursday to request updated zoning to allow for a carwash, but the item was withdrawn because the application was incomplete. Still, fears that the building would be demolished and that an application would be refiled inundated social media last week.

The developer's application had not been refiled with the city as of Tuesday evening.

At-large City Director Dean Kumpuris brought up the issue at Tuesday's city board meeting, asking if there was anything the city could do to "legally halt" development at the site and ensure that the building would be put to use and rehabilitated.

Little Rock Planning Director Jamie Collins said the property can be maintained through the city's maintenance code, which regulates the minimum maintenance requirements for existing buildings, and that the property was already zoned as "urban use," intending to encourage it to be used for mixed-use development.

Ward 5 City Director Lance Hines said the company he works for, Priority 1 Inc., had looked into the space as a possible corporate headquarters but found that there was "virtually no surface parking" and that there weren't sufficient spaces for the more than 200 employees.

"That's one of the issues we face with downtown," he said.

Two other city directors acknowledged the public opposition to the building being demolished. Ward 1's Erma Hendrix estimated she had gotten about 50 emails about the building and that she opposed its demolition.

"Is there something that we could do, like a moratorium that would protect these buildings and structures?" Ward 4 City Director Capi Peck said.

City Attorney Tom Carpenter said that was a possibility he could research.