Letter refuses cooperation on inquiry; EU envoy held back by Compiled by Democrat-Gazette staff from wire reports | October 9, 2019 at 7:30 a.m. 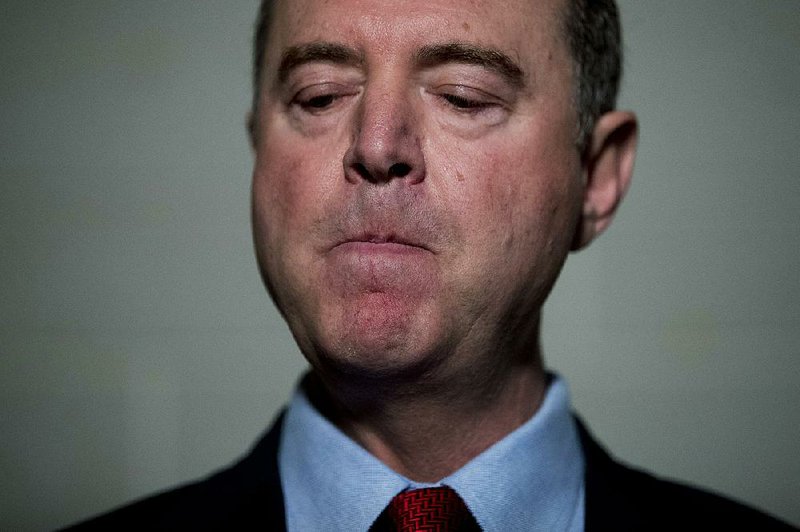 U.S. Rep. Adam Schiff, D-Calif., chairman of the House Intelligence Committee, pauses Tuesday while giving a statement to the media on Capitol Hill.

WASHINGTON -- The White House said Tuesday that it will not cooperate with what it termed the "illegitimate" impeachment inquiry by House Democrats, sharpening the constitutional clash between President Donald Trump and Congress.

Trump attorneys sent a letter to House leaders stating their refusal to participate in the quickly moving impeachment investigation.

"Given that your inquiry lacks any legitimate constitutional foundation, any pretense of fairness, or even the most elementary due process protections, the Executive Branch cannot be expected to participate in it," White House Counsel Pat Cipollone wrote.

The White House is currently objecting that the House did not formally vote to begin the impeachment inquiry into Trump. It also claims that Trump's due-process rights are being violated and is attacking the conduct of House Intelligence Committee Chairman Adam Schiff.

[Video not showing up above? Click here to watch » https://www.youtube.com/watch?v=plnhEZUSQXE]

House Speaker Nancy Pelosi has insisted the House is well within its rules to conduct oversight of the executive branch under the Constitution regardless of a formal impeachment inquiry vote.

Schiff, commenting before the White House letter was released, said, "For this impeachment inquiry we are determined to find answers."

The Constitution states the House has the sole power of impeachment, and that the Senate has the sole power to conduct impeachment trials. It specifies that a president can be removed from office for "treason, bribery, or other high crimes and misdemeanors," if supported by a two-thirds Senate vote. But it offers little guidance beyond that on proceedings.

Earlier Tuesday, Trump intensified his fight with Congress by blocking Gordon Sondland, the U.S. European Union ambassador, from privately testifying about the president's dealings with Ukraine.

Sondland's attorney, Robert Luskin, said his client was "profoundly disappointed" that he wouldn't be able to testify. And Schiff said Sondland's no-show was "yet additional strong evidence" of obstruction of Congress by Trump and Secretary of State Mike Pompeo that will only strengthen a possible impeachment case.

"The American people have the right to know if the president is acting in their interests, in the nation's interests with an eye toward our national security, and not in his narrow personal, political interests," Schiff told reporters. "By preventing us from hearing from this witness and obtaining these documents, the president and secretary of state are taking actions that prevent us from getting the facts needed to protect the nation's security."

The House followed up Tuesday afternoon with subpoenas for Sondland's testimony and records.

Democrats consider him a key witness to what transpired between Trump and President Volodymyr Zelenskiy of Ukraine, including whether the U.S. president sought to use a $391 million package of security assistance and the promise of a White House meeting as bargaining chips to pressure Zelenskiy into digging up dirt on former Vice President Joe Biden and his son, Hunter, and other Democrats.

"I would love to send Ambassador Sondland, a really good man and great American, to testify," Trump wrote Tuesday on Twitter around the time Sondland was to appear, "but unfortunately he would be testifying before a totally compromised kangaroo court, where Republican's rights have been taken away."

Schiff said that the committee had been discussing Sondland's deposition with the State Department's legal adviser as recently as Monday evening and "there was no indication that the ambassador would be a no-show."

Schiff said that Sondland, who remains a State Department employee, had turned over text messages and emails from a personal device to the department.

Trump referred to some of those communications, pointing in his tweet to comments that Sondland had made to Ambassador William "Bill" Taylor, the senior U.S. diplomat in Ukraine.

"Importantly, Ambassador Sondland's tweet, which few report, stated, 'I believe you are incorrect about President Trump's intentions. The President has been crystal clear: no quid pro quo's of any kind.' That says it ALL!" the president said on Twitter.

Sondland made those comments in a text message, not a tweet, that was part of a trove of communications turned over to Congress last week by Kurt Volker, who resigned late last month as Trump's special envoy to Ukraine.

Pelosi said thwarting the witness testimony Tuesday was an "abuse of power" in itself by the president.

A senior administration official told reporters that no additional witnesses under its purview will be permitted to appear in front of Congress or comply with document requests, saying the policy under the current circumstances is that the administration will have "a full halt" because "this is not a valid procedure" for an impeachment inquiry.

Trump's allies on Capitol Hill rushed to his defense Tuesday and condemned Schiff and the Democrats for running what they described as an unfair process, though they made clear they thought Sondland would have been a helpful witness for the president's case.

"We were looking forward to hearing from Ambassador Sondland," said Rep. Jim Jordan of Ohio, the top Republican on the Oversight and Reform Committee, adding that Republicans believed Sondland would "reinforce exactly" what lawmakers and aides heard last week from Volker. He told investigators he knew of nothing improper between the two countries.

"But we understand exactly why the administration, exactly why the State Department has chosen to say, 'Look, if it's going to be this kind of process ..., '" Jordan added.

Sen. Lindsey Graham, R-S.C. and the chairman of the Senate Judiciary Committee, said he would invite Rudy Giuliani, Trump's personal lawyer who was involved with the Ukraine matter, to testify before his panel. Giuliani led the push to enlist the Ukrainians to help investigate the business dealings of the Bidens and a theory that Ukraine meddled in the 2016 election.

"Given the House of Representatives' behavior, it is time for the Senate to inquire about corruption and other improprieties involving Ukraine," Graham said.

Democrats did not flinch at the suggestion, and Sen. Dianne Feinstein of California, Graham's Democratic counterpart on the committee, said she looked forward to questioning "Rudy Giuliani under oath about his role in seeking the Ukrainian government's assistance to investigate one of the president's political rivals."

The White House letter mounts a sweeping attack on the House proceedings and signals a battle ahead over whether the president is receiving the legal protections he and his lawyers believe he deserves.

The White House is claiming that Trump's constitutional rights to cross-examine witnesses and review all evidence in impeachment proceedings extend even to House investigations, not just a potential Senate trial. It also is calling on Democrats to grant Republicans in the House subpoena power to seek evidence in the president's defense.

The letter came as a federal judge heard arguments Tuesday in a separate case on whether the House had undertaken a formal impeachment inquiry despite not having taken an official vote and whether the inquiry can be characterized, under the law, as a "judicial proceeding."

That distinction matters because while grand jury testimony is ordinarily secret, one exception authorizes a judge to disclose it in connection with a judicial proceeding. House Democrats are seeking grand jury testimony from former special counsel Robert Mueller's Russia investigation as they conduct their impeachment inquiry.

Information for this article was contributed Zeke Miller, Jill Colvin and Eric Tucker of The Associated Press; by Nicholas Fandos, Peter Baker, Michael S. Schmidt and Maggie Haberman of The New York Times; and by Shane Harris, John Wagner, Rachael Bade, Mike DeBonis and Ellen Nakashima of The Washington Post. 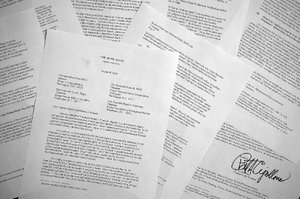 Photo by AP/JON ELSWICK
A letter from White House counsel Pat Cipollone is photographed Tuesday in Washington. More photos are available at arkansasonline.com/109statement